Summary – Tepid is the word of the week.

The Nasdaq 100 and other major indices are perched at potential pivot points just waiting for the  Election results and CPI to nudge control into the hand of the buyers or sellers. Earnings results slow to a steady drip of “B-Roll” companies, which puts even more emphasis on the week’s only two drivers.

It is notable that Apple, Amazon, Google, and Microsoft – the “Four Horsemen” of the NASDAQ 100 –  appear to be shaking in fear of another round of selling. Watch these companies closely, as their reaction this week will lead the rest of the market.

They say that “a picture speaks a thousand words,” and that statement applies well to the market as we head into a pivotal week.

After falling to its October closing lows, the Nasdaq 100 ETF (QQQ) shot right back above the $270 price mark fueled by optimistic buying after the monthly jobs report. This $270 mark has been a critical price for the QQQ since early October, but there’s more resting on this price now.

First, my current regression line capturing this rally intersects with QQQ $270. As indicated in the chart below, this regression line has been a tipping point for both the bulls and bears since its initial drawing in March 2022.

Three up and two down have been the results of this regression line’s five previous tests. It is notable that the 50-day moving average is trending lower now and also capped the rally in late October.

What makes a hold at $270 all the more critical is the lower Bollinger Band for the QQQ, which is lurking just below the $260 mark.

Adding a little more fuel to the fire of a potential break lower is a current open interest configuration for the QQQ that shows a few more cards in the market’s hand.

First, we’re trading in what I refer to as “derivative parity” as the QQQ sits at $270. This strike price holds equally large open interest on both the put and call side of the market in the  November 18 expiration series. Conclusion: The options market is telling us that $270 is a  “safe place” for the QQQ to trade and likely a spot for QQQ to be pinned.

You can read more about pinning here.

That said, a break below the regression line starts to pressure the QQQ’s floor at $260, along with the first line of overwhelming put open interest at the same price. This increases the risk of a hedge to the downside like exactly what we saw in early October, there was a great deal of open interest in the $270 put contracts; a lot of traders were trading them.

One more technical note on the QQQ… the bottom Bollinger  Band sits just below $260 as well. The volatility measure helped to support the QQQ in that same early  October selloff.

As for the upside, The QQQ will look to hold that same regression line early in the week. A successful retest or break higher this week will put the QQQ on a hot trail to its 50-day moving average (MA50) at $280.  This should be considered the upside risk for the bears, approximately 5% from Monday’s trading.

The sector of the Week – Consumer Discretionary Select Sector SPDR Fund (XLY), or is it?

C’mon folks, Walt Disney Co. (DIS) is reporting this week, so all eyes are likely to focus on the Mouse House’s earnings as a signal of the consumer’s discretionary spending, dare I say the canary in the coal mine for the sector – But are they…

What’s a little weird about this is that DIS isn’t even in the consumer discretionary sector. For the market’s purposes, it’s considered a communications company, which puts it in a real crappy group for the year.

I started harping with you just a little while ago when Alphabet (GOOG)  dropped its earnings commentary on the Street. It was something along the lines of this… get out of  the way of advertising revenue companies!

So, I still assert that DIS is the mother of all consumer 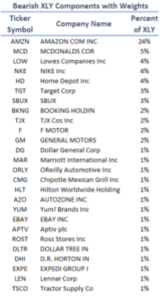 discretionary stocks. Let’s take a read on the sector

ahead of Mickey’s report card.

The XLY spent last week rallying along with the rest of

the market, finishing with 19 of the 58 component

companies of the index trading below their respective

represent 81% of the XLY’s weight. In other words,

the XLY trade direction is being determined by these

19 companies, which are already trading in bearish

While Disney is not among this group, the stock (DIS)

has been trading with 89% correlation over the last 6

months. That, my friends, is significant.

Here’s the way I’m trading this…

DIS shares are trading in a bearish trend while testing

The 20-day moving average (MA20), my famous “Trader’s Trendline.. Anything less than Magic from

the Kingdom will crack the 20-day and drop the stock

to the $90 target, where it will find some support.

Positive earnings may bolster shares for the short term – like last quarter – but a break below $100 provides the same target of $100. It’ll be flat for the next 4-6 weeks. Chart below. 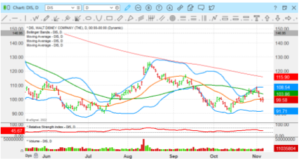 Sentiment has been mixed, as the CBOE Volatility Index (VIX) has broken 25 and appears to want to trend to 20 as it did in the waning days of the August rally. This tells me there is money sitting on the sidelines just waiting for the market to make its next move.

We did see a single-day reading of the CBOE equity put/call ratio above 1.0 last week, as traders scurried for directional trades after the FOMC announcement on Wednesday.

Simply put, that’s one of the multiple readings at this elevated level that will be REQUIRED before the market finds a reliable bottom. Please don’t go around thinking that the market is straight-up bullish from here. It’s not. Cred

The VIX is showing potential to trend to the August lows around 20. While not welcomed by the bears, the move would play well with the QQQ holding support at $270 and also serve as a catalyst for it to trend to its next level of resistance at $280 (5% above current levels).

Watch for the VIX to see a momentary pause at 24, as this was a consolidation level on both the way up and down during the VIX’s last technical cycle.

Here we go with the politics.

The midterm elections are clearly the first big event of the week, and we need to treat it accordingly. Here’s how I’m seeing the trade environment…

Tuesday’s market action will take its lead from Monday, as the morning headlines will be light on anything election, except the fact that it’s Election Day. Whoopee!

Start looking for the market to extrapolate turnout numbers in key states like Pennsylvania, Arizona, and Georgia into the afternoon close. These numbers will start to give the speculators something to work with, but you and I both know that this is so thin you should avoid trading with that group.

My expectations are that Tuesday night will feature a whipsaw of numbers and claims from both sides of the political aisle as we begin to get preliminary results in on the east coast. Again, look to Georgia and Pennsylvania for some action here. Also, remember that Georgia has the very likely potential of going into a runoff race.

I do not expect to wake up at 05:30 to see a clear winner of the balance of power in Congress by this time. Perhaps the House will be close. What I do expect is that the lawyers will have started their filings and the market will slap its head while acknowledging that it knew this was going to be the outcome.

And then we wait…

How do we trade this?

I am going to focus most of my efforts on rolling November expiration options into December. In some cases, I will pay up for less “space” as I buy more time. I will maintain a healthy dose of my November exposure while adding a few calls.

In other words, I am playing the role of a trading chameleon walking through the woods. I’ll match the environment of election-based volatility while keeping eyes and movement toward the December expiration cycle. That way, I can blend in well with the trends and volatility (bullish or bearish) that will close out the year.

Make no mistake, the CPI is the make-or-break event for the market this week, bar nothing.

Of much more importance than the circus show that will kick off Tuesday night, the latest print of the Consumer Price Index (CPI) will be the one point the market is watching closest. It also has the largest impact from a trading perspective.

This is much simpler than the elections…

Anything above those numbers would not be so great and mean more volatility, as the market will quickly run out of the door and to the phones (Airplane style) to get this market moving.

Anything below those numbers… see above. 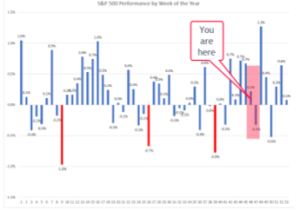 Week 46 and 47 – we just started week 46 – are often volatile, resulting in mixed returns.

The cause? C’mon, you know this.

That’s right, over the last 20 years the elections have resulted in a negative bias for the S&P 500 and other major indices. The reason: uncertainty over election day results.

I remember the first of these ordeals well when the lawyers were “wheels up” to Florida for what would turn out to be the first of a perennial trend of challenging election results as the electoral public eagerly awaited the outcome. IT TOOK WEEKS, AND THINGS HAVE GOTTEN  WORSE!

Let’s be frank, the only people that win from this election season melee are the lawyers and the media companies. The latter snags some extra ratings with their “Breaking News” headlines – every two minutes,  thanks, Wolf Blitzer – and the former grabs legal fees paid by whatever PAC is vying for the strongest puppet strings to pull attached to the “candidates.”

In addition to the elections and CPI, we’ve got plenty of

news coming from the earnings front, as the season hits a

slight lull ahead of the upcoming surge in the Retail Sector

This week’s calendar is relatively light, however a few names

the table to the right.