There aren’t many tools at a trader’s disposal that give a clearer look ahead at the market than open interest configuration (OI).

This allows us to see where the money is in the market by showing the total number of outstanding contracts yet to be settled or closed.

So, to look ahead at the market, we can start by looking at the QQQ OI for the January 20 expiration. 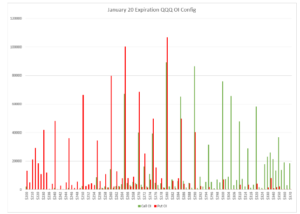 This can be a roadmap between now and January 20. In the above chart, you can find the levels of support and resistance in the market – and even where the QQQ is likely to get pinned.

What should stand out most to you on this chart are those big, ugly, red lines. That is going to be your put OI, or where the most contracts shorting QQQ are at.

You see, open interest builds over time. It does not reset each day like volume, so there is going to be some residual OI from people making those longer-term moves, some even from a year ago.

Because QQQ is currently trading well below the $280 print, it is telling us we can start to ignore OI at that level.

This is going to be a bit of a magnet, as the market likes to find a balancing act, a phenomenon of which I explained the mechanics behind in this report.

Now, we still have nearly three weeks left before this expiration cycle comes to a close, and at the time of writing this, QQQ is sitting below $265 – $262.86, to be exact.

Take a look at that chart again… $260 is the first major spike in put OI that isn’t being challenged by the call OI. It’s creating a sort of trap door for QQQ to go lower, and it’ll happen fast.

This means if there is no support found from the call side and we see QQQ break that mark, investors are going to throw their hands up and sell what they can to preserve capital.

The added selling pressure is going to shock the market, sending the QQQ down to $250 ahead of the expiration where there are 60,000 contracts already trading…

In researching the market this morning, I started digging into the Nasdaq 100 with the intention of seeing where the market was going, and clearly, I found the answer.

But I am a glutton when it comes to the data, so I started to do a deep dive into the individual companies that make up the QQQ starting with the big four we always talk about: Apple (AAPL), Amazon (AMZN), Tesla (TSLA), and Microsoft (MSFT).

We talked about AAPL, AMZN, and TSLA this morning, as they moved in lockstep with QQQ for 10 months last year – but we didn’t touch MSFT. This is where things got interesting. 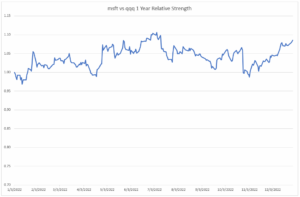 That’s right, for the last year, MSFT has been the strength in the QQQ and has been outperforming the ETF by nearly 20% the entire time, all while these other tech giants fell with the rest of the market.

So, if we want to know exactly when QQQ is going to break the $260 print to go lower, MSFT is where we need to look. 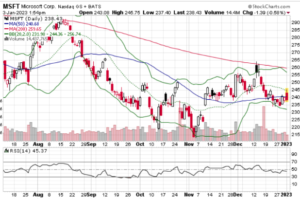 As you can see in this chart, the 20-day moving average (MA20) just rolled over and is set up for a “flesh-wound” cross that we’ve been talking about recently.

Along with a neutral 50-day moving average (MA50) rejecting the stock, we could start to see MSFT fall in with the rest of the market and become the straw that breaks the camel’s back.

Look for MSFT to drop lower and challenge its bottom Bolling band, if we see a break below that $231 level it is going to slide the same way we saw the rest of the QQQ fall and we will look to prime a trade to profit from this exact move.

In the interim, if you want a trade on MSFT look at the $240-$220 put spreads, full disclosure I am short MSFT myself but this will put you ahead of the curve so you can profit before QQQ has a chance to start its descent.