Tesla (TSLA) has been on the ‘golden boy” list of stocks for quite some time. It has been the window dressing for all the large funds who want to say “hey, look at what you get when you put your money with us.”

Along with that, analysts have been riding this stock for months as well, and for good reason – historically this has been a great investment, I mean c’mon before the split it was trading over $900 – an astonishing 5,200% gain in 12 years.

Now, earlier this year they did a stock split bringing the shares down to a much more attainable price of under $300 and this sent the market into a euphoric frenzy as you can see from the chart. 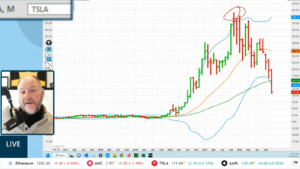 Post split the ‘euphoric’ stage was very short-lived as there was a lot of selling of the ‘new shares’ that older investors found themselves with which is the reason that we start to see the decline, but at this point, there is already the feeling of disbelief.

As the stock started to drop it hit its 20-day moving average (MA20) and you had everybody saying “no, no, no this is Elon we are talking about this company can’t go down it’s just a fluke.”

This is exactly what we have been seeing in the market for months now with all of these bear market rallies, it is just people saying, the market can’t go down anymore, we are on the way back up…

But, after the rally off of the MA20, you can start to see investors start to question if it could actually go down as the stock starts to slip again…

There was a difference this time around… there was a trigger event, there is always something that needs to trigger a change in sentiment for market capitulation to kick into gear.

In the case of TSLA, it was Twitter… and I talked about this just last week.

Elon bought twitter, and along with his other ventures like Tesla, Space-X, The Boring Company, and a few others, people were starting to question his bandwidth – or ability to successfully run each of these companies.

Investors were starting to feel as though TSLA was the red-headed stepchild, being left behind as he shifted his focus to Twitter…

This is what true capitulation looks like, not just for TSLA, but for any company and even the market as a whole.

The news starts to chatter, analysts start talking about what needs to be done and some even defend it and say it is going to be one of the top stocks to own in 2023.

By the time this is happening everybody is just selling the stock so they can get it out of their portfolio – even the mutual funds I mentioned earlier want to get it off of the books because it won’t look good if they are the ones holding a stock that is down 72% on the year.

For what it’s worth, this stock could drop another 15-20% lower, so if you are interested in the stock – start looking to use the dollar cost averaging strategy that I spoke about on Tuesday when the stock gets to $100.

This is a clear-cut example of what the true ride to the bottom of the market is going to look like, you are going to see this kind of movement across the board – and that just hasn’t happened yet.

But, as I mentioned earlier, there needs to be a trigger…

This is where things start to get a bit more speculative, but it is important to understand what the driving force behind this crash is if you plan to profit from it.

Given the headlines and press releases we have been seeing lately about some of the major companies continuing to tighten their budgets, lay-offs still happening, and more importantly, they are pre-selling their earnings in hopes to lighten the blow of the results – I have solid ground to stand on to say that this earnings season will be the trigger event.

Although sitting in cash is a trade in itself, you have me on your side, be sure to stick with me as I trudge through earnings season with you and I will show you each of these blows to the market as they happen.

Not only will this give you plenty of profit opportunities on the way down, but we will be catching the true market bottom and avoid being one of the investors who misses the first 20% of the market making its comeback.