Remember my comment earlier this week about the 9% of NASDAQ 100 stocks trading below their 50-day?

This came up in my NTR stream with Garrett on Wednesday so I thought I would pull out a chart that displays the Investor’s Intelligence poll.

This is a chart that I got to all the time – just a quick check – to get a broader sense of the market sentiment, it is the 10,000 foot look.

Take a peak so I can show you what it tells you and how you should adjust your portfolio to match. 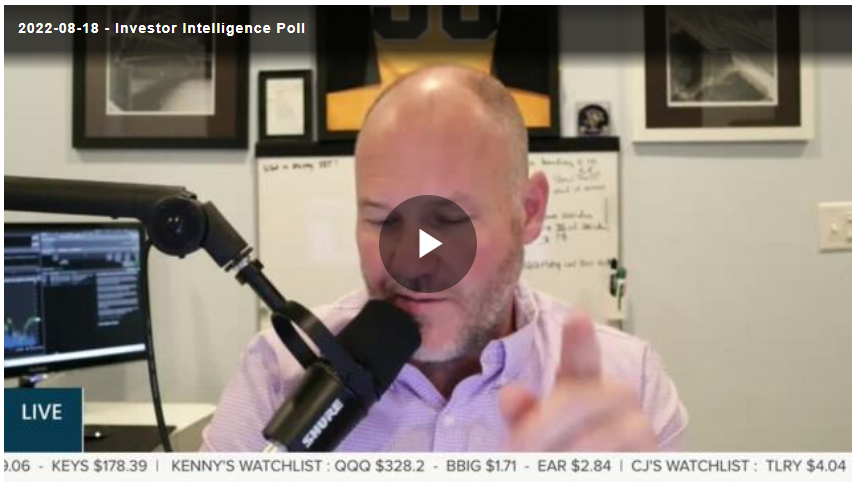 Now there was a point just a few weeks ago that when I asked the chat, in 4-6 weeks will the market be higher or lower, the answer was a resounding lower. I asked again today and according to Brandon, about 65% of you were saying higher today.

This may be a bit confusing and a lot of you were saying that you thought it was due to the mid-term elections and you would be correct, an election always drive the market higher.

There are some flaws to this theory and I will cover that in the show tomorrow but it is a real thing.

Just to give you a quick thought on this, the current market is very disconnected from reality. Even if there is a bias – and there is – we have to get into the next two months before we really see some volume get back into the market, which will be the driver behind the Mid-term move.

The Semis are the new-age Dow Theory group

I was racking my brain after people were saying the market was going to go higher, it might just be as simple as the market is already up 24% from the bottom.

When I tried to discern the cause of the movement in the market I noticed that the volume just was not there. I started asking myself, Where is the volume, it has got to be somewhere right?

Now as I was doing my digging I noticed some interesting ‘fits’ of volume coming from the semiconductor sector. It’s like people are ready to just take the stocks and run but the race hasn’t quite started yet.

These waves of traders hitting this sector are causing it to go above the average daily volume.

Now if you want to find the real meat and potatoes of the sector you need to break it down to a stock by stock view.

Is there a trade here? Yup, I gave it to you last Thursday on the World’s Biggest Show. If you missed it, I gave a trade on SMH looking at October expiration, I expect it to go down to $220.

We are getting away from headline risk right now by trading it this way. Nobody wants to be trading a stock that can come out and ruin your trading day because they announce something that was unforeseen.

A trade like this allows you to smooth the movement out, block out the noise, – and more importantly – SLOW IT DOWN.

The Semis are the leader of the group right now and it will be giving you everything you need in the next few weeks in terms of a defining where the market is going.

Now I’m not the only one seeing this, analysts and institutions are starting to break down on this as well as shown by the latest round of 13-Fs that showed the whales have scaled back their exposure to this sector.

We are in a new age of trading right now and luckily this means the info we need to track down the markets next move is right in front of us.

I’m going to be trading this soon with my Night Traders, if you are not with them you might just be the one left holding the bag as Kenny would say.

Ok, so I like the little joke pictures, especially the ones people post in the discord. Seriously, if you are not in there yet, WHAT ARE YOU DOING! Join us here for some fun and insight.

I hesitated to do this, but know that it’s the right thing to do. We’ve got to have a daily “MEME Watch” until this lunacy ends.

All seriousness… Garrett and I spent some time talking about the markets yesterday on the Night Trader stream.

One thing that we were nodding our heads about was the MEME cycle turning into an indicator to watch as the next market top signal.

I mentioned hitting these stocks a few days ago and here’s how we’re watching them moving forward.

I’ll maintain a vigil on these stocks and they’ll begin to fall one by one as an indication that the market has finally finished chasing these dogs.

That’s when we’ll move to a broader bearish stance as the top – just like November.

This is where my Penny Nation members are going to shine as these stocks start to fall they will come into our range and we could possibly see some profit potential as the market throws these stocks to the garbage.

Tomorrow marks another week in the books and we have a good show for you in the morning so make sure you are there.