No one factor is going to derail the energy trade; there are many at work here spanning technical data, global influences, and overall trader sentiment.

If you look at the United States Oil Fund LP (USO) chart, it is in a pattern of lower highs and lower lows.

Since that time, all of the technical momentum for USO has been to the downside. You have had “the proverbial headwind” for the oil trade just because of the price activity.

But here’s something I know to be true: the energy complex is the most technically aware in terms of following the trends.

And energy traders, they’re going to follow trends – whether they’re seasonal trends, which are very effective with energy, or simple price trends.

So, all the way back in July when we saw USO break the MA50, my bearish antennas perked up. It had broken below its 200-day moving average (MA200) and its MA50 was starting to change directions.

Then, just like the rest of the market, it found its way to rally.

But it was following all of the technical cues of saying, “Hey, this is an asset that’s weakening.”

So, when something like this happens, and we’re more or less in the bottom right-hand portion of the chart, I always pull the scope back a little and look at our monthly chart.

When I do that, the 20-month moving average is the only line that matters. That is the line of demarcation between a bull and bear market in terms of the trend lines.

The reason that’s key is that the long-term trend is starting to take over, and USO, and by extension the oil market, is slipping into a bear market.

And nobody wants to talk about this, because energy has been the savior for the markets for the past 12 or so months. But the chart doesn’t lie; oil is flirting with a bear market.

The textbook, Investopedia’s definition of a bear market is a sustained fall from highs of 20%, and we’re 30% off of the 12-month highs in crude oil.

And so this is a tough thing for investors to grapple with when the only trades that worked in all of 2022 is being long on energy and being long on oil.

For that reason, talking negatively about it has kind of been sacrosanct. Me saying “oil is slipping into a bear market” is more or less like shouting the emperor doesn’t have any clothes.

As you can see, the technicals show us energy is falling into a bear market – but so do the fundamentals.

Chinese demand for oil is a globally recognized barometer for the strength (or weakness) of the world energy market. China consumes more than 12 million barrels of oil per day to run its mega-economy.

Well, with the country pulling back on its zero-COVID policy and the number of cases rising sharply, we’re seeing headlines about declining factory activity.

We’re in the middle of a global recession, this isn’t just domestic. The last time we saw anything close to this was 2008 or 2009, and oil basically fell off the bandwagon.

It actually crossed over its 20-month moving average back in September, which puts us about three months into a bear-market trend.

Now, when the 20-month rolls over, that’s when you start to show a little more concern.

It’s a little bit of a cause-and-effect thing, but when that rolls over, in most cases it’s because there is a recession causing a drop in demand.

So, we’ve got the fundamental argument telling us we should see weaker demand. We see the technical breakdown.

And when we turn to energy stocks, we see just about everything is extremely overbought, because investors still haven’t priced in the technical and fundamental weakness we just talked about.

In this particular case with OXY, breaking $60 is critical. At the time of writing this, it’s trying to hold its Bollinger Band. 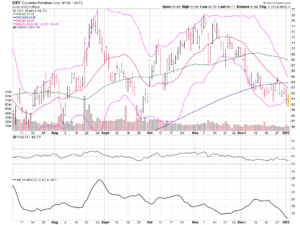 MA50 rolled over. MA200 got broken. Trader’s trend line is breaking down. At $60, it’s taking out its bottom Bollinger Band – which is at its tightest in the last year – and it turns into a volatility trade to the downside.

So, the only possible hiccup in this is the headline “Warren Buffett wants it at $62.” But like I said, somebody will smarten up and realize that Buffett would love to buy it at $50 instead of $60.

In fact, I look at all the options activity on OXY, and there’s a clear road to $50 by expiration in February.

Exxon is likely a little more insulated from this, but Chevron, I’m looking at a breakdown below $173.

I think USO could end up going as low as $60 before this is all said and done, but volume will have to pick up before that happens.

I think you’ll see some more pullback on those tickers and other oil stocks over the next five days, setting the table nicely for some trades.

Who knows, tune into the show tomorrow morning and you just might catch one.