We are seeing only 9 companies that are trading below their respective 50-day trend line from QQQ.

Do you know which QQQ stocks are trading at a 10% above their 50-day trend line right now? People, are you listening? 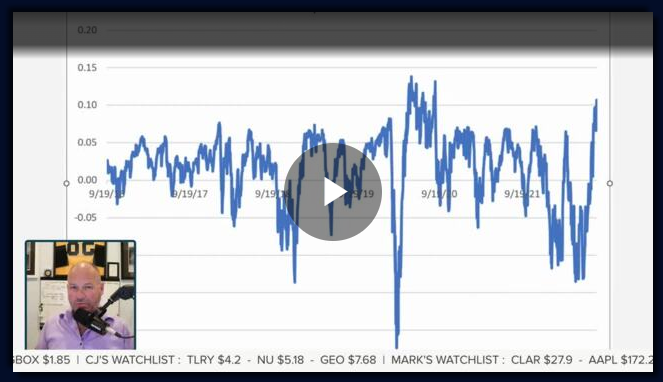 An Overbought and Disconnected Market

I watched the market rally into the close remembering one thing… this darned group of politicians in the House that were set to pass this infrastructure spending bill to the White House after the close.

The Inflation ‘Seduction’ Act found its way through the halls of Congress later in the day on Friday and ready to get signed into law by President Biden.

That was enough to shoot the major indices higher into the close on some lighter volume, but I can’t complain about light volume any more, higher prices are higher prices.

Just know that when the volume drops at these overbought levels, there will be some reckoning.

There’s a lot of talk about the market hitting some overbought readings last week.

Now, the way we look at a stock being overbought is using the Relative Strength Index (RSI). Note this is different from just relative strength.

Relating the result of this comparison to price action can give traders an idea of how a security may perform.

An asset is usually considered overbought when the RSI is above 70.

If you use the standard 14 day period for the RSI, then we’re hitting all kinds of signals that the market is ready for at minimum a rest.

As you know, I use the 21 day version of this indicator for a reason… It allows the overbought to do exactly what it wants to do in a market like this… get a little bubbly. 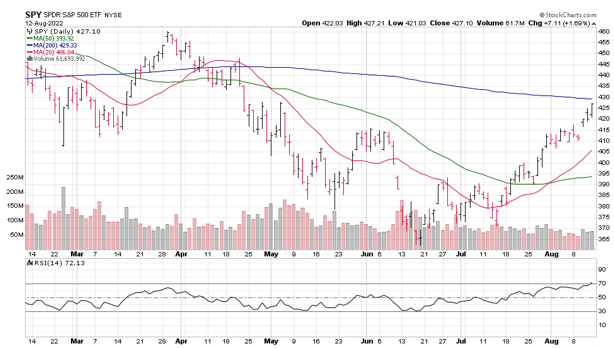 Now this chart is showing SPY with its 14-day RSI hitting the 70 level which we just crossed over on Friday.

Now one thing that holds true is a security that is overbought can always be more overbought.

Just to give you an idea on what I mean by that is we passed $420 mark and those round numbers are where people tend to buy in. This positions SPY to make a run at its 200-day moving average and land on a $430 price.

It’s at this point that all of the longer term technical investors are going to start thinking it’s the end of the bear market.

If we break above that 200 and start to leave it behind youre going to start to see the institutional money get off the side lines and start to flood the market and taking us even higher.

That would be the time you start to see celebration in the streets and people cheering for the end of the bear market. At that point the market, investors, and traders alike will have no reason to look in the rear view mirror…

On the other hand there is one thing that could stop this from happening….

Although we have some time between now and then, the Fed holds the power to stop it from happening, even by accident. The still need to pull some liquidity from the market and that might be what stomps this breakout back into its place.

First, what is the 50-day premium?

This is a rule that numbers follow called reversion to the mean.

Mean reversion, in finance, suggests that various events of interest such as a securities RSI being above 70, eventually revert to their long-term average levels.

On June 16 I mentioned in this exact spot that 9% of the Nasdaq 100 stocks were trading above their 50-day moving averages. That’s a number that stands out if you’ve been watching it as long as I have (more than 20 years).

You see, single digits on this single number are big as they are a sign of the technically overbought and oversold signals that the rest of the market doesn’t watch. And 9% is – as you know – a single-digit number.

Well, almost a month has passed and that number is at 9% again. The only difference is that the 9 represents the number of stocks trading below their respective 50-day and you need to pay attention to that now. We’ve seen a complete reversal in the 50-day numbers which isn’t a great thing for the momentum traders that are jumping on the bullish side of the market.

How bullish? Take a look at one of my favorite “trend” indicators.

I went over the overbought and oversold readings on Monday from an RSI perspective, but this is the better, more reliable reading. 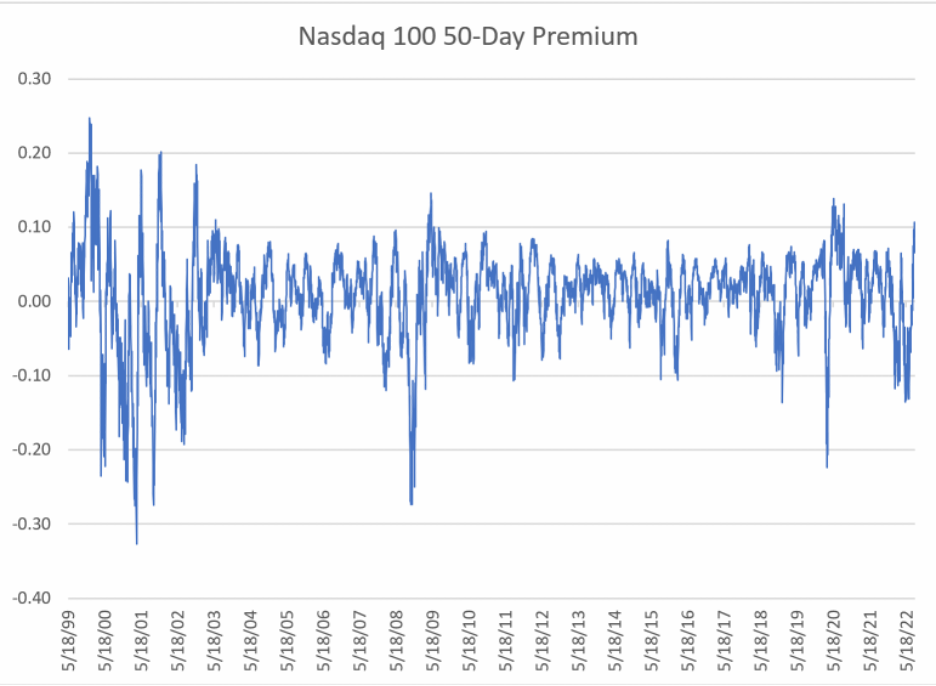 The bad news is that there hasn’t been a long-term bear market that hasn’t been marked by a reading of -20%, period. That’s what you call “buying the blood”.

The good news is that this is a waiting game that will be confirmed by this same number. When we break below that 10% it will be on…. The question is just “for how long?”

Combine the two numbers that I just gave you and you’ve got the mixture for a short- to the intermediate-term correction that should bring this market back to reason.

Break back below 10% on the 50-day premium AND a break below 85% of the QQQ stocks above their respective 50-day. I almost guarantee that Garrett will be waving the Red Flag when that happens (or at least have it out and ready to go) and that’s when we’re jumping back on the right side of the market.