Week 9 got off to a rough start, as my seasonality data predicted, with the Dow Jones Industrial Average (INDU) and S&P 500 Index (SPX) both ending a volatile Monday lower.

The tech-heavy Nasdaq Composite (IXIC), however, managed to buck the trend and eke out a win…

But as Money Morning LIVE superhero Oliva “Voz” Voznenko and I discussed, one popular tech ETF is setting up for a reversal on the charts – and the data that says so is the sexiest I’ve ever seen in my 20+ years of trading.

And in today’s Penny Hawk newsletter, I’ll show you how to read the open interest tea leaves for yourself, as this options data can provide clues to where a stock or ETF may be headed.

I’ll discuss exactly what I’m seeing LIVE at 9:30 a.m. ET in today’s Long & Short of It installment, so make sure you’re there!

I’ll also go over my daily lineup of cheap options – the same list that I share with YOU every morning at the open, and that generated a pretty play on the Teucrium Wheat Fund (WEAT) for my Penny Nation members yesterday.

In fact, WEAT is a perfect example of the strategy I love: playing low-dollar options to tap into a leveraged move on a macro trend.

I’ll touch on that trade at 9:30 a.m. ET right here, as well as another ETF I’ve been watching closely amid the Russia-Ukraine conflict. It’s generating a lot of dumb-money trades, and is just more evidence that this market is desperate.

And, of course, my Penny Nation members will get all the actionable trade details from today’s watchlists during our 10:30 a.m. ET F.A.S.T. Scan session in our exclusive trading room!

If you’re a regular viewer of The Long & Short of It (catch all my replays here), you’ve certainly seen the infamous whiteboard that sits behind my shoulder. 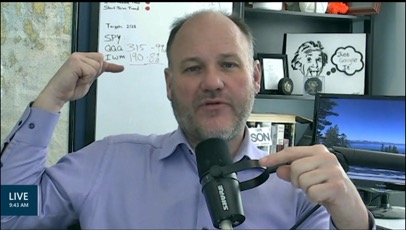 My colleagues often give me grief about my “serial killer handwriting,” so if you can’t make out the numbers I wrote before yesterday’s session, they are my short-term targets for two ETFs:

It’s the second one – QQQ – that I want to break down today, to show you how I interpret open interest configurations to help guide my trades.

Open interest is the number of open call or put contracts at a specific strike in a specific expiration series. The options could’ve been bought or sold to open – it doesn’t matter, as long as they weren’t exercised, closed, or expired, they count.

Areas of heavy open interest can tell you levels that options traders are watching closely, so when you see a strike that’s heavily populated, you should pay attention – that level could become significant on the charts.

That said, the QQQ recently grazed “oversold” territory after falling beneath $330 last week, and the fund – which is based on the tech-heavy Nasdaq-100 Index (NDX) – bounced back with a vengeance.

However, the $340-$350 area is where we see a LOT of call open interest resting – and that could translate into technical resistance for QQQ.

Below is QQQ call OI among options series expiring March 2 to March 16, and it’s one of the sexiest charts I’ve ever seen.

The $350-strike call expiring Friday, March 4 – represented by the highest pink rectangle – is home to more than 21,000 contracts alone, while the $345-strike call in the same series has nearly 13,000 contracts in open interest.

And for a different view of where traders are placing their QQQ bets, here’s what QQQ open interest looks like after removing the $1-increment strikes, and sticking to only the $5-increment contracts.

The chart below also includes QQQ put open interest (in red), and you can see that peak OI sits at the $315 level – which just so happens to be my short-term target for the ETF. 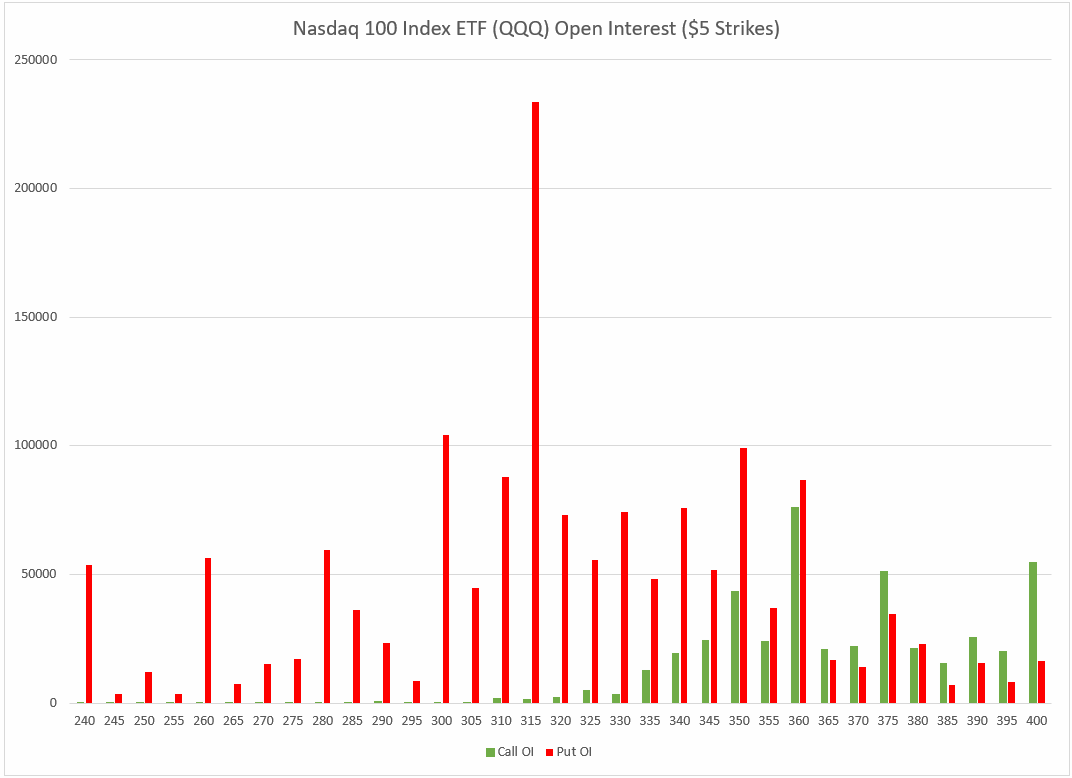 Of course, if one of the QQQ heavyweights – Apple (AAPL), for instance – happens to enjoy a crazy rally and skyrocket, it could take the fund along for the ride, helping it to barrel through options-related resistance…

But all things being equal, the call open interest for QQQ could act as a mechanical speed bump for the shares.

If we hit that in Week 9, we might see a hell of a rally coming off the bottom, and we could trade both sides of it in Penny Nation – buying low-dollar puts on the way down, and buying calls on the way up.

If we don’t hit that target relatively soon, we could see a slow, slow move lower on light volume, assuming there are no crazy catalysts to snap us back.

I’ll be keeping an eye on the QQQ, as well as several other important indicators, in our 9:30 a.m. Long & Short of It sessions, so make sure you’re there!

I’ll also peruse today’s watchlist for potential trade ideas for my Penny Nation crew. It serves as our roadmap, and I show members how to drive the car safely, so to speak, when we go behind the velvet rope and into our exclusive 10:30 a.m. F.A.S.T. Scans.

You never know… there could be more WEAT-like wins before our very eyes. 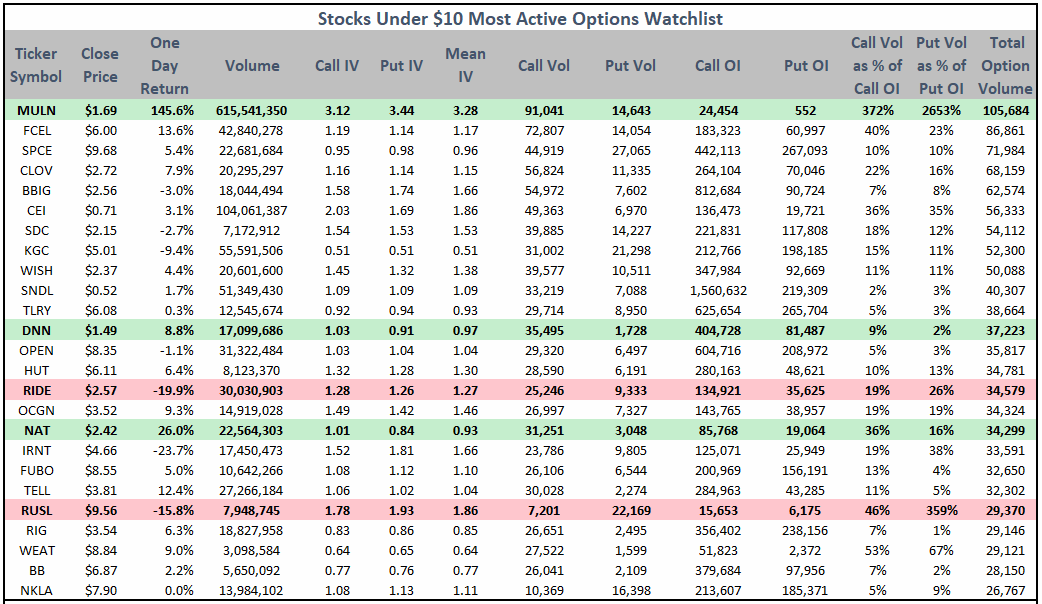