The past week has been wild, with Chicago Board Options Exchange’s CBOE Volatility Index (VIX) readings hovering around 26 and nearly 1,000-point swings on the S&P 500.

Well, buckle up, because it’s about to get even crazier. I’m talking about the serious gantlet of a calendar that we’re about to embark on.

One that will send this market in all sorts of different directions.

I’m not going to sugarcoat it – I don’t know whether it will go higher or lower. No one does for sure.

But I do know there will be volatility.

Even more importantly, I know I’m going to take whatever the market presents and make some money. As you know, volatility creates profit opportunities – and you can bet your behind I’m going to find them. 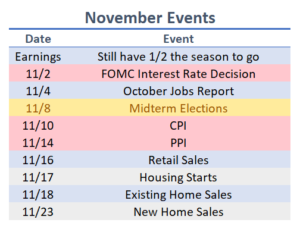 Normally, this would be something you would look at and say, “This is the opportunity for the market to absolutely power forward.”

But I’m going to be completely honest with you…

A calendar like this could send stocks rocketing 20%… or it could tank the market 20%. Talk about volatile.

For starters, does it even feel like we’re only halfway through earning season? Well, we are. As of Friday, 52% of companies on the S&P 500 had reported.

Of those companies, 71% have come out with positive earnings-per-share marks, and we’re seeing a 2.2% growth rate for earnings – not bad in this environment.

But the bad reports have made all the headlines, like AMZN sinking 13% on the back of weak Q4 guidance. A perfect reminder that bellwether stocks aren’t the full picture.

That said, keep this next point in mind. Historically, the market doesn’t turn around until the S&P 500 posts negative earnings growth.

Negative earnings are almost always a precursor to a long-term bottom.

So, we certainly have the potential to go even lower.

But that’s not all.

An earnings-per-share guidance is a number CEOs give that looks forward and says, “This is what we see happening over the next quarter or fiscal year.”

28 of the S&P 500 companies have issued negative earnings per share guidance. 14 have given positive.

That’s the worst skew I’ve seen on that number, 2-to-1 on the bears.

Let’s be clear about what this means. These EPS guidances are forward-looking. That means that two thirds of those S&P 500 companies issued bearish outlooks for the near future.

So, with that 2-to-1 bearish ratio being so disparate to the 2.2% growth shown in earnings, that tells you that those companies think this market is still grinding out a bottom.

But here’s something you need to keep in mind: the market is a discounting mechanism.

It is supposed to get ahead, and this is the thing that kept going through my head this weekend as I was trying to make sense of what happened.

This is a tough market to make sense of, but we’ll be ready no matter what.

On Wednesday, when Jerome Powell speaks, you’ll get an idea of whether The Fed is going to listen to the crowd and loosen up or listen to their hearts and stick to the course.

And then it is off to the races for the rest of the month.

The point is, we’re going to see a constant flood of data that’s going to give investors their cues.

Of course, The Fed will be the first shoe to drop, but while there will likely be a response to their announcement, we’re not expecting any overwhelming shockwaves.

That said, you remember when I brought up the midterm elections earlier? Next Tuesday is a very interesting one.

As the democrats work to retain control of the House and the Senate, there has been some activity to help reinforce support among voters.

We’ve all been well aware of oil and gasoline prices this year. Well, after prices per gallon were eclipsing $5 earlier in the year, we’ve seen that cool a bit and they’re back below $4.

However, the reason for that drop doesn’t necessarily have me singing Hakuna Matata.

Take a look at this chart. 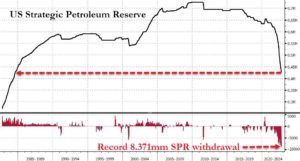 As you can see – and you may remember we talked about this about six weeks ago – the U.S. has been siphoning its oil reserves for the better part of the past few months in attempts to tamp down gas prices.

Well, it’s worked. However, it is the definition of a band-aid on a gaping wound.

The American drop in oil prices ran concurrent with OPEC implementing a steep drop in production. So, the price drop was never sustainable. At some point, America is going to have to replenish those petroleum reserves.

With the midterm elections representing such an important moment for politicians on both sides, you better believe that won’t happen before November 8.

The last thing Biden and his team want is people banging that “gas-prices-are-too-high” drum right before people take to voting booths.

However, there are a lot of smart people – Garrett Baldwin included – who have been predicting that replenishment will begin after the elections are done.

And this will have a serious impact on the price of oil. That’s why I’m keeping my eyes closely on XLE and USO, because with the issue of petroleum reserves coming to a head, there is going to be some inevitable movement.