Our friends across the pond are on our minds today not only because of the passing of the queen, but also because of the crisis they have been slowly lowering themselves into for the past decade…

Exposure to the credit markets and waning liquidity are building, resulting in a fresh round of pressure on the European banks as well as large International banks based here in the US such as Bank of America.

I want to take some time to reflect on something that happened in the Greece crises a while back as it is important to recognize the parallels.

I bring it up because they were in a situation where – the government had been pumping money out, interest rates were really out there, they had a period of hyper-inflation, and they had a slowdown in their economy.

Low and behold, when you look at what happened – that tiny little island that you felt we were not really tied to – still effected our financial insitutions.

For today I’m going to talk about the carryover trade to the US banks, with BAC high on the list – and what you can do to protect yourself from the next Gwyneth-style contagion.

One thing to note in the next week or two is the pre-earnings announcements. This is where the banks are going to start coming by and slipping some expectations under the door for what there earning should look like.

Don’t let this fool you though remember, a lot of companies presold their earnings just a few weeks ago and there are people who made money from it but, a lot of people got burned.

In short there are three companies that, if the situation in Europe continues to follow this trend and get worse as the dumpster fire intensifies, these are the ones you need to be watching.

Normal approaches to shorting an asset class are a little harder to put together when addressing the building credit crisis in Europe as bond-specific ETFs are hard to come by and none really optionable.

But I’m the ETF guy, so guess what, I found some ETFs

Just to save you the headache of reading through my thoughts on these here is a quick rundown of how to trade each one of these. 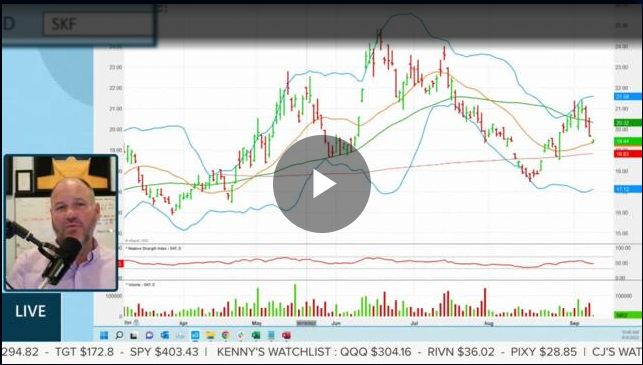 I’m Short the Homebuilders, Here’s why

So, there’s something this week that caught my eye – I want to talk about the homebuilders. 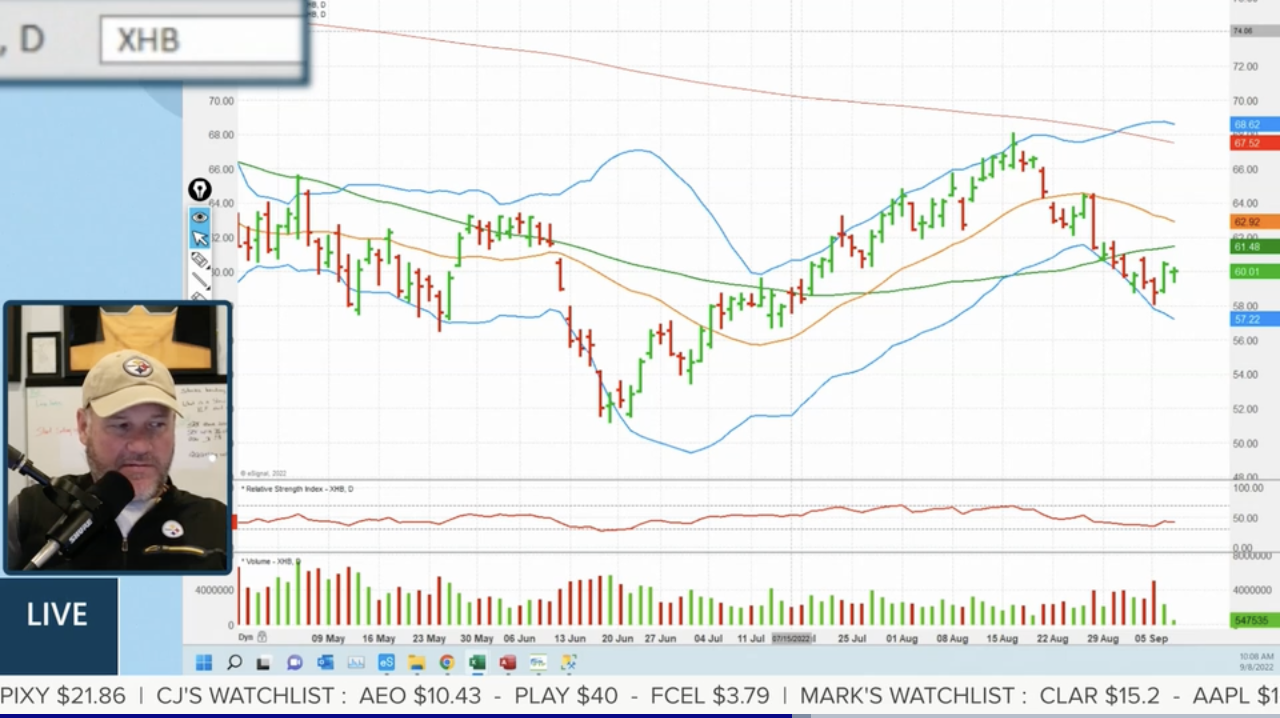 Full disclosure, I am currently short on the homebuilders. It’s one of those areas that I’ve looked at and said, I just don’t think the suspended animation trade can continue.

But this is one of the sectors that’s in the bottom three of performances for the year.

Some people might think they’ve gone so low that they can’t go any lower. But, man, the news is really starting to flow on the homebuilders right now – and you need to take advantage of it.

XHB right now, when I look at the above chart, feels like a house of cards that feels like it’s ready to fall.

I’ve seen this movie before. Let’s look at it and play out what’s happening over the next month or two that’s starting to send a little bit of a ripple through the homebuilders and, more importantly, the real estate market.

The trend that we’ve seen in housing starts is first.

July is the worst number we’ve seen in more than a decade for housing starts. People just aren’t digging the holes to get the housing starts because, well, houses take a little bit of time to build.

Right now, is the point where, if you build something, you start to be a little concerned about if you can sell it.

We’re looking at a situation where the starts are coming to a screeching halt because it’s not worth putting money into it. You don’t think you’re going to get it out, because values are going down.

But the thing that’s coming next – the next shoe to drop – is already underway: interest rates. Interest rates are now going to levels that are starting to make people stop or pause in thinking about buying a home.

I came across an interesting article the other day…

It said that while the median home price is still well above $400,000 (after shooting through the roof over the last six years), the cost of a mortgage on a $400,000 house has increased $700 per month from a year ago simply due to higher interest rates.

(Of course, those rates appear to be headed even higher as the FOMC meeting approaches.)

That hike is stopping everybody in their tracks, as mortgage applications continue to fall.

Just look at what’s happening in the Bay area… 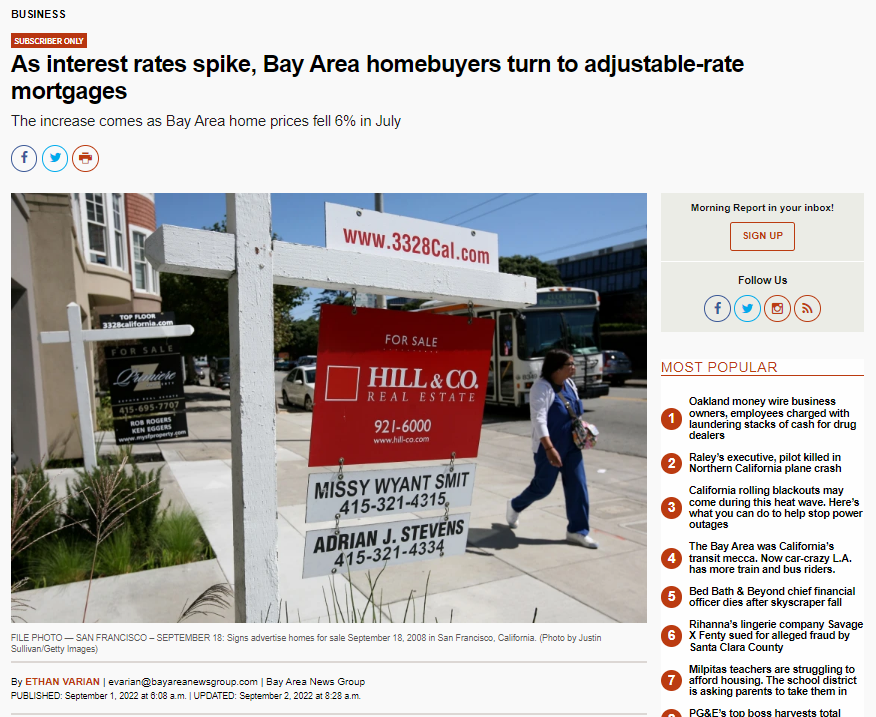 You’ve got those interest rates spiking, and now, they’re turning to adjustable-rate mortgages.

When’s the last time you read about that? That’s a rhetorical question. You know the answer.

This is just the walk down Main Street we’re doing. More importantly, here’s how you trade it.

Look, I’m not trying to paint a picture that says, “The world’s on fire! It sucks, run away!”

No, run right toward this fire. When you start seeing signs like this, it tells you there’s opportunity.

Unfortunately, in some cases, pain for the market is opportunity for others. You can sit around and do nothing and say, “OK, I’m just going to trade at the bottom.”

Or, you can trade like I am, and start to short the ITB.

These are the same signs I saw three weeks ago when I told you to buy shorts on the SMH. 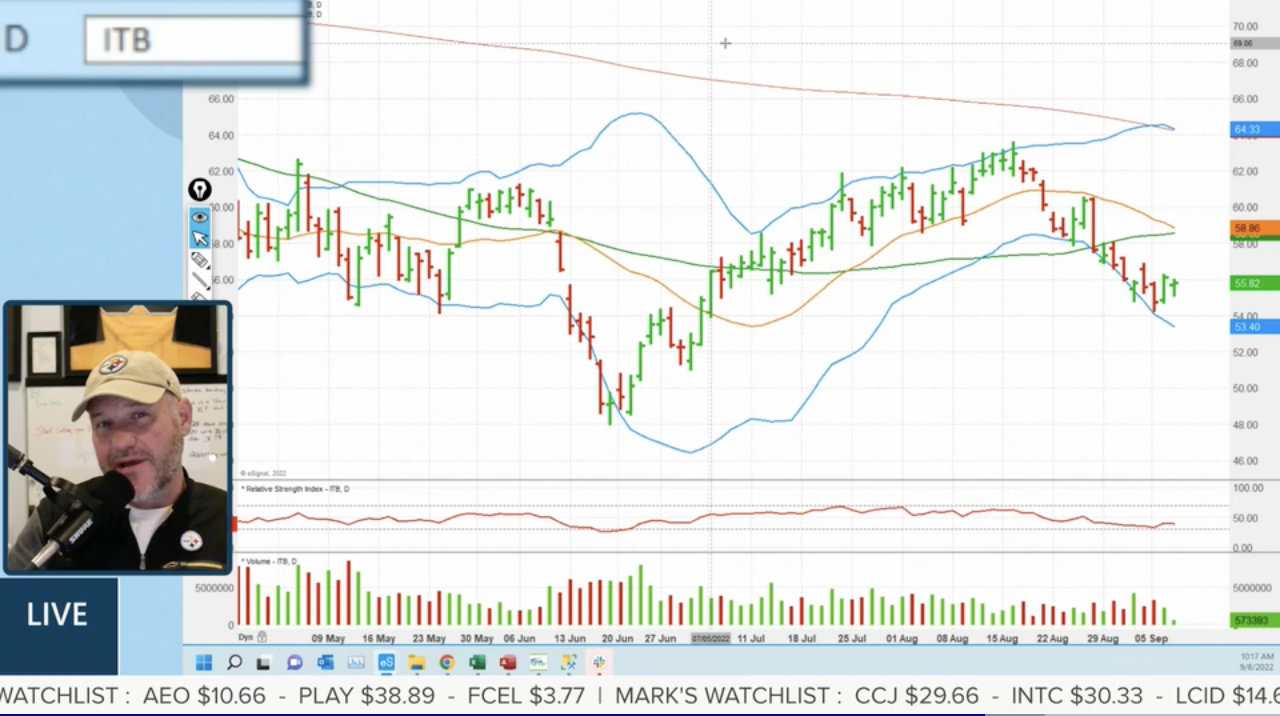 This $55 level, I’m actually looking at October and November options that are at the 50 strike, and even thinking about going out to January. Let this burn long and slow. Don’t look to make 100% in a week on this trade, look to make 200%, or 300%, over the next five months.

Notice, the 20-day and 50-day right now are starting to form a little cross here, and your 50-day moving average is going into a bearish pattern as it rolls over.

These are the signs I look for, along with everything we saw in the walk down main street, to say, “I’m looking for something that’s going to move another 20-25% lower.”

Profit from it slowly. Let the trend play out. Let the market come to you.

You’ll be happy with these hedges.