Let’s start with this….

What’s wrong with this picture? 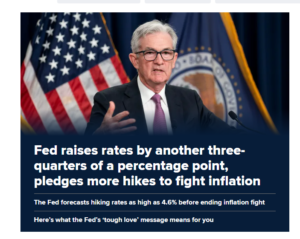 Nothing dummies!!  The Fed has been projecting this move since Jackson Hole, but for some reason, the market just can’t accept the fact that Jerome Powell and the FOMC have a job to do and it’s not a fun one.

Think about it, the FOMC uses tools that are forward guiding to try to control this MASSIVE economy.  At the same time, the same group of very well-educated people has to rely on data that is backward looking to make adjustments to their forward guiding tools.

It’s so crazy that even I can’t think of an analogy to describe it and I’m the KING of those things.

What I do know is that you are going to drive yourself crazy if you try to get inside the mind of the Fed to decide where things are going over the next four months.

Now I want to preface this right here and right now. I don’t know this guy personally, I know somebody who does but it is not me. But he is a very smart guy, you don’t get to where he is without knowing a thing or two. This is to make a point and maybe poke a little fun as you know I like to do but…

Just take a look at this guy, he’ll tell you!!! 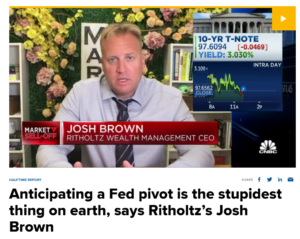 Say it with me… Anticipating the Fed pivot is the stupidest thing on earth!!!

Don’t believe him???  Well, he tried a few days ago, and look what happened… 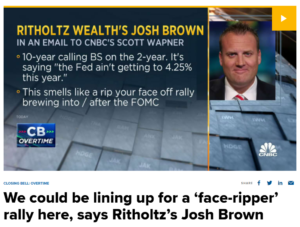 I told Brandon and the other Night Traders about my afternoon, why not share it with you?

Seriously folks… I hope you’re listening to me because you’re interested in trading the trends, not the noise.  I did get VERY excited listening to Kenny call out trades during that hour and even jumped into a very short-lived TQQQ trade.

Kenny really can take advantage of this short-lived movement which is why I like him. But as somebody who is using trading strategies on a time frame more aligned with an investor’s time frame, you start to realize that the Fed events are almost binary.

You start to realize and be aware of the fact that well… it doesn’t really matter. You know where the market is going to go in 4-6 weeks. Hindsight can be 20-20 but dialing in your portfolio and tuning your foresight using the data is not an insurmountable task but rather something you and I do every single day on the show and it is really starting to pay off.

First: Kenny truly is gifted.  It was like watching the Rainman count toothpicks on the floor to see him trade the wild ride after the announcement.

Second: 3.54%, 5.73%, and 14.61% were amounts that my personal accounts’ total value went up using the same “slow the market down” approach that I use with the night traders and penny nation folks.  In a market like this, you can’t beat trading through the noise like this.

Let’s look at what the sectors did yesterday…

This is what the sector snapshot looked like an hour after the FOMC announcement.  Notables here were the Clean Energy and the Semis, which makes absolutely no sense. 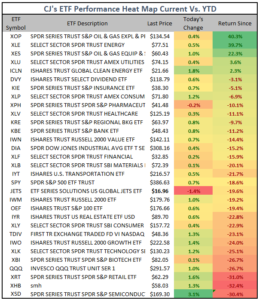 Fast forward to the end of day and you had this…

This is the beauty of following this data throughout the day like me…. It uncovers the stupid trades, kind of like trying to call the FOMC pivot…

Here are a few of the standouts –

First, J-E-T-S (JETS): I’ve been stalking this ETF for the last week as the airlines have looked ready to come in for a landing.  Well, Wednesday’s “standout” activity and the chart suggest that we’re ready to hit some turbulence.

This is that hope play starting to come in after the Fed this week. Everybody is trying to put the pieces of the puzzle together. This sector is in some real technical trouble

Second, Biotechnology (XBI): This sector was lagging behind the market all day long and finished at the bottom of the pile.  The fact is that this is a trend that we talked about last week.

September – November is a terrible seasonality period for the biotechnology companies as we head into conference season and a slow period for trial announcements.

Energy: JPOW mentioned that the commodity cycle has come to an end.  That means everything including the oil and gas companies turn at the trough for now.

Watch the USO it was teetering at the $68 level which I explained on Thursday and going into the close yesterday was down around 5.6%.  This will probably cause a ripple effect through the large energy complex.  Remember that the energy traders are the most technically inclined that I have seen!

We are going to keep watching these commodity plays as they are the ones that we have the best opportunities in as the Fed continues to drop the hammer on the market with the rate hikes. This being followed by a promise to keep them coming to fend off inflation leaves us with a market that is becoming more and more of a target-rich environment.

Each day as we take these lessons and put them to work we are climbing the ranks and hitting more of those targets and that is what I’m really all about.

Be on the lookout tomorrow, even though I am going camping I’m not going to take a break. You’ll be getting my top 5 stocks to watch as we head into next week, I’ll see you guys then.