We are starting to see earnings hit the tape from the big banks and the whole market is watching.

On a company-by-company basis, earnings are important, but if you want to trade like me and avoid the headlines, tune out the noise, and slow the market down there is a better way to watch earnings.

Remember, this stops you from being exposed to the daggers of any one company that underperformed and allows you to capitalize on a tradable opportunity.

So, let’s take a look at the initial reaction to earnings find the target prices, and take some time to extrapolate what we are seeing to set expectations for what is coming from the regional banks

This is the flop of earnings

WFC beat the earnings per share (EPS) by $0.08 and beat the revenue expectations as well.

As for forward guidance, they didn’t say much, but what they did say was important…

They used the magic word that we talked about on the show on Thursday – the future.

They advised that there is going to be some added pressure on their balance sheet if people don’t start paying on their loans.

Now, this is not a 2008-2009 situation, the lending practices that forced the recession last time have been suspended for quite some time.

What is happening right now with the banks is concerns about the consumer slowing down. If you couple that with inflation and the mass layoffs that we keep hearing about, the idea of those loans coming back to them starts to become a real fear.

BAC as well as the other large banks are expecting to have to put money aside to address those bad loans, but it can only be factored in so much before it really puts a hit on their revenue stream.

So, what does this mean for the financial sector right now?

Well, let’s take a look at the chart and I will explain… 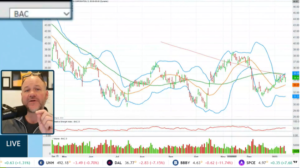 Now with a good earnings report, a rally to get it back up above the $34 level doesn’t surprise me, but what I’m looking for here is how this shakes out as we get into next week.

You can see, this rally happened during the first hour of the market, traders and investors tend to be a bit more emboldened during this time – and for no good reason.

That is why you hear me talk about the first hour of the market using the term ‘amateur hour.’

That bold posture they started the day with tends to wear off quickly, especially if things don’t start to break out or even better if things start to go lower.

It’s actually a bit interesting, Kenny and I both agreed that for BAC you would need to see a real rip-up above the MA50 and the 200-day moving average (MA200) for this stock to go anywhere.

Realistically, this should come back as there is going to be a lot of resistance as the MA50, MA200, and the top Bollinger band are all in the same spot.

I expect to see this rally be short-lived and as people are selling and moving to the next position, the value is going to drop. If it breaks below that MA20 at $33.22 the market is going to make quick work of this stock dropping to $32.50.

For what it’s worth CitiGroup (C) came out of the hole the exact same way even with an earnings miss, they beat on revenue 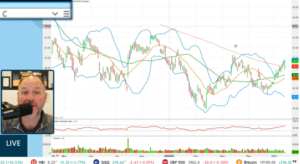 The only difference is they were above that ‘third rail’ of the market – the MA200.

This is a huge obstacle that the market has tried to test time and time again.

We’ve seen it in the S&P 500 (SPY), and the Invesco QQQ trust series 1 (QQQ) on the rare occasions that it reaches that level, hell, we’ve even seen it in Microsoft (MSFT).

Mind your MA200 as it is one of the hardest hurdles in the market and if CitiGroup is going to continue this rally we need at least one more close above the MA200 before this thing can really take off. 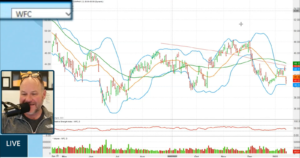 This was the company where we were all nodding our heads and pointing our fingers at thinking they were going a bit too far when they said they were getting away from a big portion of their business for the time being.

Instead, we got the big reveal that they really do have concerns over where the company is going.

They missed revenue by nearly half a BILLION dollars.

And with lowered guidance moving forward – let’s just say the landing was not a graceful one.

What to expect from next week’s earnings 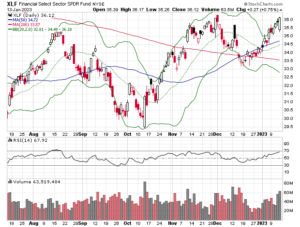 That is easily seen when you look at the rally going on in the ETF. They are still waiting on two companies – Goldman Sachs (GS) and Goldman Sachs.

These two companies – if they have a report like Wells Fargo – are going to turn the XLF into a firing range where $34.80 becomes a pretty easy target to hit.

But these are just the Big national banks, next week we are going to start seeing the regional banks come out and if you’ve been paying attention to them I am sure that you know that they haven’t really been taking off yet.

That is because there is a pretty huge difference (other than the number of locations). It’s the fact that the bigger banks have a trading desk but you can still take a cue from what is happening with the big boys to set expectations about the regional banks’ earnings.

All of the big banks have been making money off of the interest rates going higher and doing a few things with their trade desks.

They are not making any money on the investment banking side of things.

The regional banks only really have one of those games to play, the interest rates.

You can see that in the KRE 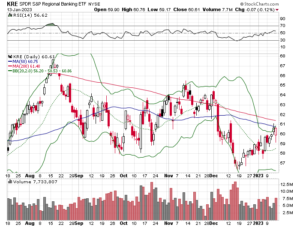 This ETF hasn’t gotten the bid up and the traders in this position are going to be a little anxious as we go into next week.

It’s not likely that we see a break to the upside as all of the technicals are working against it.

We are just at the beginning of the earnings season and there is a long way to go, so here’s the deal…

This earnings season is going to be the Catalyst to change the entire market.

I don’t want to be the reason you get lost in the headlines.

So, I’m going to open my Night Trader room up on Tuesday and Wednesday and explain exactly how I am going to be trading earnings, this way you can choose to mirror my strategy or even consider following me through the battleground.

Either way, consider this your invite and I will send you the link to join before we get started, I’ll see you there. Enjoy the long weekend!