this market seems to have blown a fuse in reaction to the Consumer Price Index (CPI) this morning.

I wanted to wait until after the midterms and CPI print.

If you didn’t see the report come out, here is a quick breakdown: 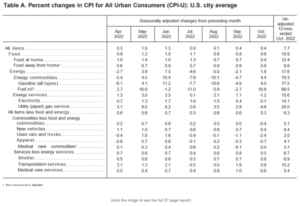 Everybody was so focused on the top line of this report – and for good reason, it tells us what the overall inflation rate was for the last 12 months… that’s what we care about, right?

Well, investors may have jumped the gun a bit, driving the S&P 500 (SPY) up nearly 4%, and the Invesco QQQ Trust (QQQ) up nearly 5% in pre-market trading.

When I say they’ve jumped the gun, I don’t say it lightly. This report is the definition of fugazi.

My job is to now make up for the losses on the put side as quickly as possible. That way we can run into the end of the year on a strong note – and this is a much easier task than you may believe.

Clearly, the market is going to find an easy path to the upside with this report. Really it is just fueled by the knee-jerk reactions of antsy traders ready to pull any dollar they can off the market.

The top line I mentioned before says, for the last 12 months, inflation rates have been at 7.7%, which is still a very high number in my opinion.

This is causing the market to rally is because we were expecting it to come in at 8%, meaning this number was a much softer blow than expected.

Well, when you take a closer look, almost every single thing you need to spend money on to survive is up.

So, if everything is still costing more, how did inflation go down?

Well, we saw major decreases in the cost of two things that specifically stood out to me: Used cars and clothes…

These two items are the only reason we saw the CPI number go down.

The reason for the drop in the cost of cars and clothes really comes down to an inventory issue.

Let’s start with cars. Since I assume you buy clothes more frequently than you buy a car, I’d rather get it out of the way.

The reason they say this, for starters, is because it’s when the dealer is least busy. But that isn’t the point I’m trying to make. We need to focus on the “October or November” bit.

This is when dealers start getting new inventory in for the following year’s makes and models.

To make space for this inventory, they start slashing prices just to get things off the lot.

So when prices start to precipitously drop, it will be reflected in the CPI report and appear as if things are getting better.

Next on my list is clothing. By now, you should be expecting what I’m about to say.

The season is changing, and let’s be honest, nobody NEEDS to buy a new pair of shorts as we go into the winter. So what are the retail stores to do?

Toss everything in storage and bring it back out next year? What if the “style” changes and this year’s stuff isn’t “hip” anymore? (Is that how the kids are saying it?)

Clothing in storage not only takes up valuable real estate in a store, it’s also a liability for the retailer, as it could simply not be in demand come spring.

So, to reduce their risk – just like us – they change their strategy.

Inflation of food and other items was still high and may persist.

Hell, just look at the message Garrett Baldwin sent me this morning… 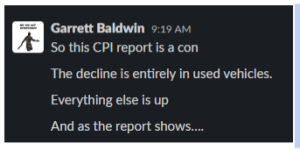 He pointed out something that was extremely consequential for the future of the market, and for some reason, nobody is talking about it. But I don’t want to step on his toes.

He’s going to be live tonight telling people exactly how to profit from this massive shockwave – you can register for the event right here.

So, the CPI report we got today really doesn’t support or validate what the market’s doing right now.

We’ve heard that “all we need is a pivot,” so the market’s going to grab this and run higher.

Well here’s what we know that they don’t – or don’t want to admit.

This isn’t a pivot, but it smells like one for the traders out there.

So, This is how you need to be trading this momentary mania the market is experiencing.

Short-term call positions are going to be the best moves to see a profit.

Short holding periods and taking the profits almost immediately are going to be key.

Bear with me as I right the ship, and we’ll get to the end of the year in the green.

There are macro risks out there, including the crypto space, which is likely to take weeks to unwind. But keep in mind, the market just got a HUGE piece of candy with this CPI report.

I’ll stick to my guns on the fact that the market has not put in a long-term bottom yet based on the layoffs, lowered guidance, and other fundamentals that do not project a healthy six months ahead.

That said, that doesn’t mean we can’t benefit.

For now, we’ll party like it’s a new bull market!

Just a reminder, if you’re looking for me in the morning, I’ll be on the putting green somewhere warm – and maybe I’ll come back with pictures and a story or two.

Either way, my mind will be focused on the markets and I’ll be sure to update you as this “CPI” trade continues to develop.