I talk about the CBOE Options Equity Put/Call Ratio a lot. But I check on it even more often.

It’s one of the things I monitor closest to determine exactly when we’ve reached a long-term bottom and it’s time to switch to a bullish posture.

If more people are trading puts than calls (an EQPCR reading above 1.0), that’s a reflection of negative market sentiment.

In general, the average EQPCR reading is around 0.56 or so.

Well, take a look at this…

That’s a 1.46 from last Wednesday, November 16. It almost raised the eyebrows clean off my face.

That reading was the highest we’ve seen in a long, long time. Take a look…

It’s so drastic that my first reaction was, “There’s something wrong. Somebody fat-fingered something.”

Not the case. This is a really big deal.

When I deep dive into something like this, I do a deep dive and start looking at the data that feeds the number.

Now, an important thing to understand when you’re looking at the EQPCR is that the number represents the volume traded on the Chicago Board Options Exchange.

As a result, it excludes your index options. This is only equities – stocks, ETFs, etc., in other words.

So, you’re looking at roughly 5,800 different equities. Some of them have a lot of volume, others have literally zero.

But that’s where my deep dive started, with the companies that trade on the CBOE. And it became clear that the 1.46 reading was not a fluke.

Readings above 1.00 are extremely rare, as you can see on the above chart. That’s why I lean on this metric.

This is practically unprecedented.

Simply put, when you see a reading this historic, there are trades that will happen in the next couple of weeks.

Big-time trades that will shift the market.

But that’s exactly why I rolled up my sleeves this weekend and started looking.

So, I went into my database and pulled up all of the volume compared to the open interest, I looked at the implied volatility (IV), and I started to pull apart the top 20 companies based on volume from last Wednesday. (More on that later…)

Not only that, though, I had to take an even broader look at all of the exchanges – not just the CBOE.

Generally, the average EQPCR number for every exchange combined sits around 0.70. Well, it was around 1.07, meaning there’s definitely some elevated put activity out there. Meanwhile, the IV on the puts were going up.

When IV is rising, people are typically out there buying. Conversely, when you’re selling, IV goes down because you’re the person trying to take the volatility out.

Let’s see how this is playing out in one of my favorite areas – ETFs. 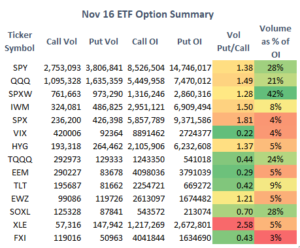 Look at the number of puts being traded on SPY, QQQ, SPXW, and even IWM. This is some volume that’s worth monitoring over the next couple of weeks.

Usually, when you see this type of put volume, it tells you people are getting more fearful.

Except on November 16, this was a market that was balancing – teetering at worst. Take a look at the SPDR S&P 500 ETF Trust (SPY). 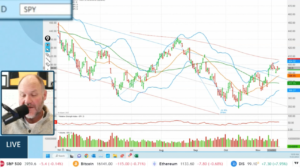 Those consecutive days registering in the $386 range shows, it wasn’t plunging.

If you see that sort of put volume numbers when the market’s plunging, that tells you it’s time to back up the truck and buy, buy, buy.

But this market was wrestling its way sideways. That tells me there are people out there starting to look at what’s going to happen over the next couple of weeks and months, and they’re buying protection.

All of that options activity on the put side from last week is going to have a hand in the market playing it out.

Here’s how it’s going to play out for those top 20 stocks from last Wednesday in terms of volume. This chart is going to tell us where to focus for our trades. 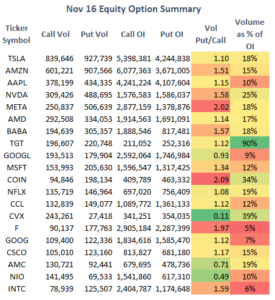 This is where we get down to brass tacks. With the QQQ and SPY showing elevated put ratios, the market’s starting to get a little uneasy.

Amazon (AMZN), as you know, has been struggling lately. 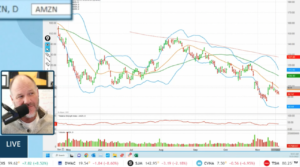 When we saw that pop to the trader’s trendline, we said, “Watch out, it’s going to get rejected.”

Sure enough, last Wednesday, when that volume kicked in, we saw that trendline come down.

So, $90 is your short-term target for AMZN – but I’m looking at $85 as the point where I’m going to start selling some puts. Maybe even going down as far as $75…

Another one I’m looking at closely is Coinbase (COIN).

It’s no secret that crypto, in light of the FTX disaster, is as vulnerable now as maybe ever before. There are no new buyers. We’re hearing the term “contagion” thrown around a good bit, as people can’t quite separate FTX from the overall industry.

From a fundamental perspective, I look at the cryptocurrency stocks – COIN included, of course – as a slow bleed right now. Like they’ve been clipped by an 18-wheeler and left on the side of the road.

That’s going to be the case until there’s some sort of resolution to all of this.

Frankly, my advice is to stay away from this at the moment. At the very least, tread lightly. There’s going to be a headline in the next week or two that shakes this up in a way we can’t predict right now.

A little bit of a catch with Ford, since it was only 5% of the volume that turned over in terms of open interest (the far-right column).

With used car prices coming down, consumers starting to stretch themselves, and inventory for next year creating a crunch for lot space, Ford is now basically offering to help you hedge higher interest rates.

So they’re saying, “Pick the car you want – if it’s not there right now, we’re going to cover the difference in interest rates by the time you close.”

That’s shocking. That tells you how much they’re worried about higher interest rates stifling their sales.

Keep that in mind as we watch Ford, as it’s currently 2X its average EQPCR.

And then there’s Meta Platforms, Inc. (META). This one is huge, sitting at 2.02 with 18% of the volume turning over in open interest. 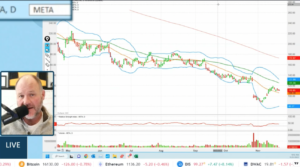 It’s getting ready to break down below that $100 mark, and this is a stock that’s going to slide all the way down to that $80 low again.

Any company that subsists off of putting advertisements in your face is struggling right now.

Keep them on your watchlist.

Ultimately, that put volume that we saw last Wednesday – at the ETF and the equity level – was very real, and they appear to be protective puts.

So, you get yourself ready for what the rest of the market is seeing right now in terms of these options.

Take these names, dig a little deeper as I do, and there’s a trade in every single one of them.

By the way, speaking of the CBOE, you might not realize that our old pal Mark Sebastian came up the ranks on the Chicago exchange.

He was telling me about these private auctions on the CBOE where people would make 3X to 5X their money in a matter of minutes.

These happened every single day.

Well, he’s actually about to unveil an incredible secret that will let you crash these $1.3-trillion private auctions and target the time of day when all the real money gets made.

It used to be that only those on the pit floor could make money on these, but thanks to an SEC rule change, that’s no longer the case.

He’s going to be giving all of the details on how to get involved tonight at 7 p.m ET.