This truly is it folks. All of you that have been thinking that the market could continue to melt higher should be taking note of the activity in the MEME space.

This is the opposite of “melting higher” which is the reason that the fact that we’ve seen these stocks get back on everyone’s radar is a problem.

I told you that I would follow them for the next couple of weeks, so here’s today’s update…. 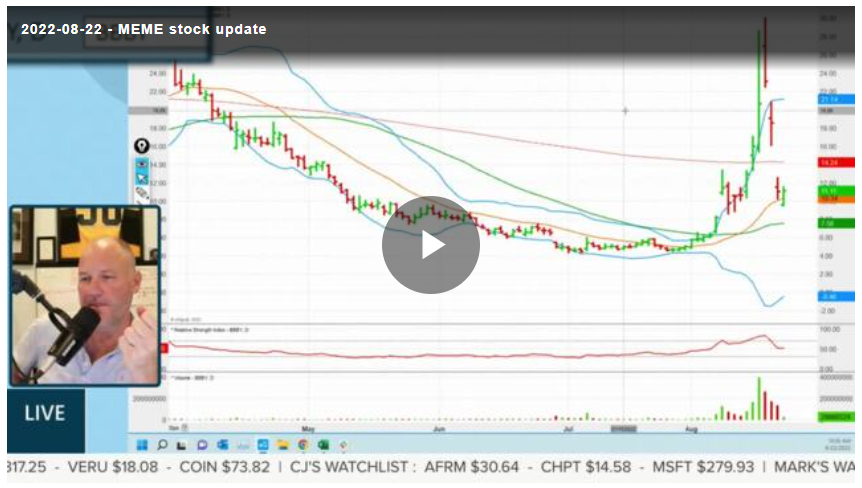 200-day moving averages have been a problem for more than a few of these stocks, and that should tell you even more about the market.

Count this as a “con” for the market this week as we continue to see the air get let out of the MEME trades.

If you only get ONE thing out of this segment, let it be this… don’t be the last one holding the BBBY bag, please!

tomorrow, on Technical Tuesday, we’ll do a deep dive on why we track the 200-day, why it’s so important – and a full list of stocks in 200-day trouble – so keep your ass in that seat.

Last week, the rumble on the Street was that the housing market has finally slipped into a recession.

Yup, house values are now falling, and we’re finding that the average listing is sticking around for more than a few days, which is a big change from where we were a few months ago when realtors were holding “closed bid parties” to create buzz over listings.

Lumber futures dropped like a rock again on Friday, but the longer-term chart is what is telling here. 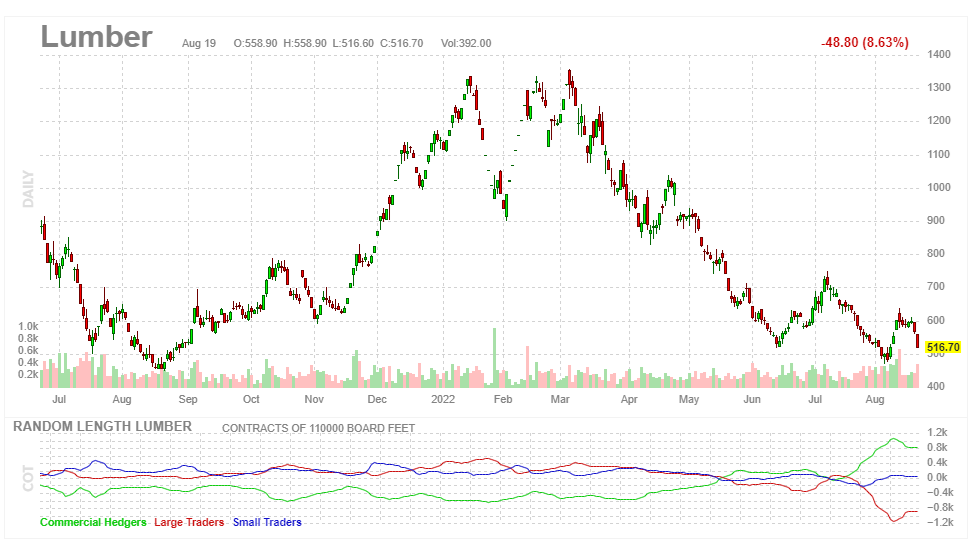 Look at last year. A little bit of a normal market.

Everyone was looking at what was going on in the market, saw that the economy was stronger, saw things were going well, figured that, OK, well, housing prices will go up.

This time around is different.

Look at the commitment of traders report on the far right side of the bottom of this chart. The difference between the hedgers and the traders here tells you the story of the market as they look forward.

Remember, this is why you want to be with me!

The widening gap between these two groups signals a divergence in the outlook and objectives that will provide some very interesting trading opportunities for you and me.

Remember, a hedger has a different objective than a trader. Speculation may affect them both, but their approach to the markets is by their very nature completely different.

Hedgers are still going to hedge. That’s what they do.

But, man, those large traders have taken out that net position.

That’s the indication that they don’t see the lumber prices coming back as quickly as they usually would in the late fall, early winter, when everyone starts ramping up the machines.

This is calling a top in the lumber, and the fact that we completely round-tripped it from roughly $600, all the way up to $1,300, and back again, tells you that this is the last ride – at least this year – for this cycle.

“How do you trade this?” is the question.

Which should you be siding with right now? Hint, it’s not the “small traders.”

This chart by itself has just put 11 stocks on my “timing” list, and not the bullish one.

You’ve been wondering why the XHB hasn’t fallen yet? Hang in there, baby…

A lot of stocks – since the mid-July period – have taken off on FOMO rallies and got stopped by the 200-day. It’s been a pattern.

I’m going to put a nice little list together of these companies and tell you which ones are really following the pattern.

I’ve got everything that I want to short, and I have been writing it down. So many.

But if we go back through this pattern – just like the market following the pattern back in 2008 – we’re going to find even more.

This is going to be a target-rich environment for the bears just using that combination. A run and the 200-day moving average’s resistance.

More on that soon…

The Single Indicator to end the Rally

Could it be that something as simple as a line could stop the market’s irrational bear market rally?

The answer is a strong YES!!!!

Do you remember the fancy chart analysis that I gave you last Monday when we looked at the S&P 500 chart that correlated 90% to May 2008?

And then the Fibonacci chart that matched-up exactly with May of 2008 with the 50% retracement?

They were both on your screen if you were watching me last week, you can always ask for those charts again in the Discord and I’ll take care of you!

Here’s your answer to “can it all come down to a line?”

Now if youre not willing to continue following me with the notion that the technicals really do matter and history is about to repeat itself, then you should just take your money and sit it in cash for the next 6 months while you weather the storm.

That is not how a highly profitable trader is made…

If your money is sitting in cash youre going to be losing day after day as inflation is going to chip away at your nest egg while you just hope to survive the onslaught of the market by being out of the action.

If you want to be under my wing, great. You get me every morning for a whole hour. That might not be enough for you and if you think it’s not, Check out my Night Trader, we are going to continue to rip though the market and make a profit as we fight the storm rather than cowering in a ‘safe place’.

Whats important is the 200-day moving average. This chart is old but preforming the exact same way the chart from today is acting.

It is not just us talking about the moving average similarities, the analysts from Bloomberg CNBC and so on are also starting to recognize this and that puts the market in a very interesting position.

You see when everybody is talking about a pain point or point of resistance in the market, it becomes more sensitive to the interactions it has with that indicator.

The reason for this is people have a seed planted in their brain that XYZ happens when the market does something specific.

So we know the 200-day is a point of resistance for the market so when investors start to hear that and they see the stock getting closer they position themselves to get out of the position when the stock makes contact.

The market really does tend to turn into a series of self-fulfilling prophecies and that is exactly what it is doing right now.

How do you trade this shit sandwich the market is serving you?

You need to act like a portfolio manager or an EXTREAMLY aggressive trader and realize they are turning the machine back on again.

If you missed it the first time with me we closed a number of position and we killed it.

Right now the market is rolling over again and presenting you with yet another opportunity to capture some real profits to the down side.

Just be sure to buckle up as it won’t be a straight shot down, there are going to be some bumps in the road. That is why I preach every single day, Bend Don’t Break…

It will relive the anxiety from the situation because you witnessed this exact market take place 14 years ago, you have been down this road, the landmarks are becoming more familiar and your destination is coming up…

Make sure you are with me tomorrow as I have a list of companies that have made their runs up to the 200-day.

Every single one of them have bearish trade potential in the coming weeks and I’ll explain why that is for a bit of a fun Technical Tuesday.