We are “riding the rails” today as I talk about the top Bollinger Band. With all due respect to Ozzy Osborne, we’re going off the rails on this crazy train.

Stocks are flying a bit close to the sun right now as we have a large number of companies who have broken or are about to break their top Bollinger Band.

Although, that may seem insignificant, it isn’t.

Today I broke down the science behind my Bollinger Band play and I’m prepared to prove to you why this is the more effective tools you have at your disposal this earnings season.

When I say we are riding the rails, what I really mean is the markets are trotting along right beside that top Bollinger Band. This has been positioning us nicely to see some real profit from the volatility plays being handed out in the market when they decide to make a run.

We continued to see that Money Migration that I mentioned on Wednesday as my Night Trader ETF summary showed the same pull from defensive sectors into the FOMO sectors. Take a closer look at how money is moving in an interesting way here.

These FOMO sectors are an important thing to note because that’s where we start to see stocks dancing with the Bollinger Bands, one wrong move we are going to be ready to strike.

Snap Chat released their earnings so I am going to use this as an example. Now Snap is NOT Meta, google, or tesla, BUT is an excellent representation of what is going on with the social trade right now… 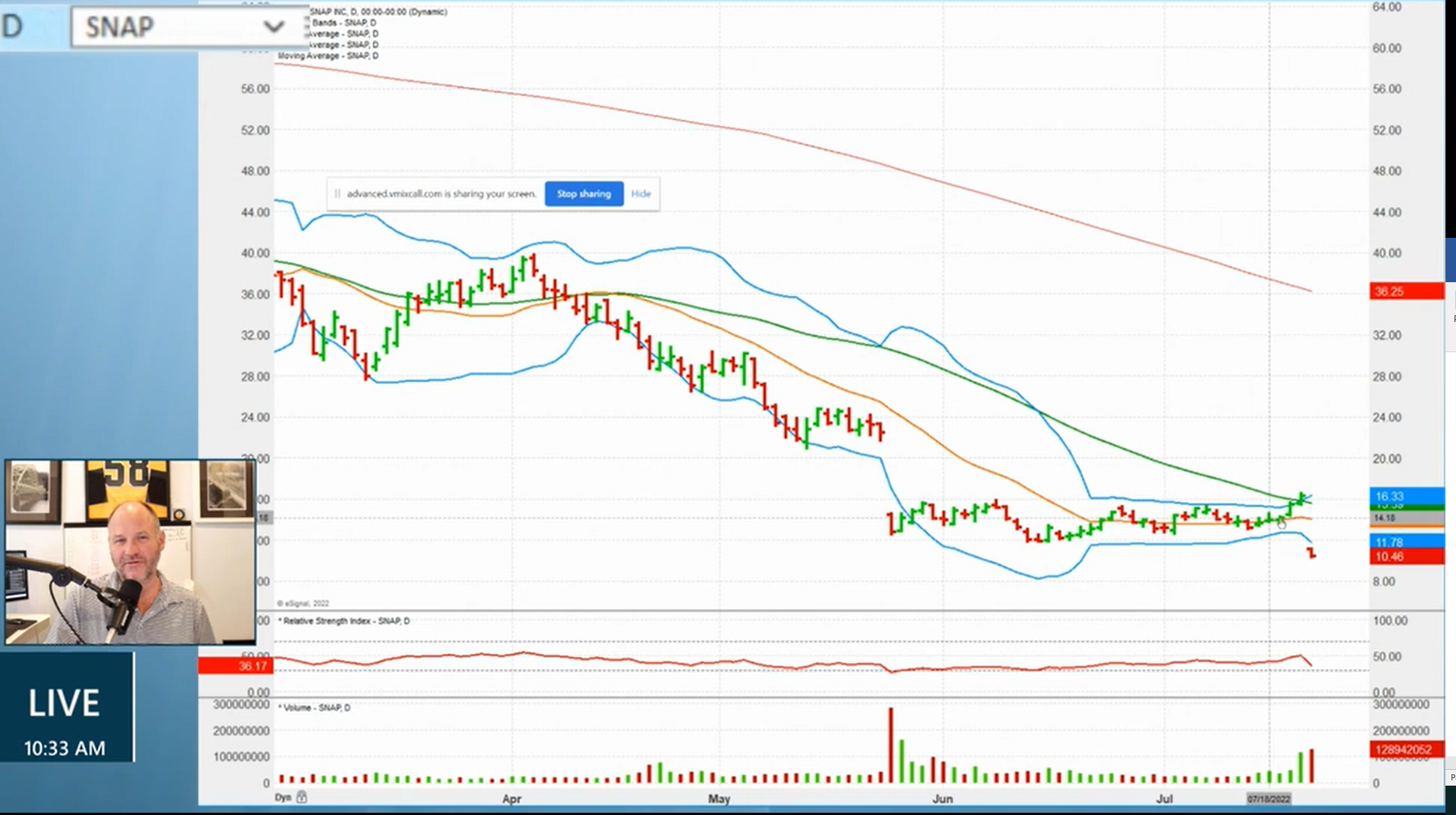 Now Snap was a bit of a late bloomer, after its last drop in may it bounced back and forth more than a BB in a box car really just staying right on the 20-day moving average.

As you can see the stock took a jump from $14 up to over $16 in just two days. This is what I like to call the hope trade or better yet the FOMO trade. As humans we always have a fear of missing the boat on an opportunity, which is what drove the uptick.

This is where Bollinger Bands can be a real Profit Saver. Any time you see a stock take a quick jump like this and it is above the top Bollinger Band you have to keep your stop losses tight.

What Are The Bollinger Bands Telling Us?

When we see a stock go ‘off the rails’ and is trading outside of the Bollinger Bands it means we are seeing unusual price activity, in the case of snap it is to the upside. When you have unusual activity in the market, it will follow a normal destitution over time.

This is why the Bollinger Bands will be a clear as day sign to be cautious when a stock breaks out. It will tell you when something is gearing up to disrupt the trend that is attempting to form.

When a stock meets the top or bottom Band it will hit a zone of resistance or support respectively. In the case of snap meeting the top Bollinger Band, it met a point of resistance that was only amplified by it also trading above the 50-day moving average.

The Math Behind The Madness.

Most of us are creatures of habit, the same goes for the market. When there is unusual activity or an outlier in the market we tend to see those points of resistance and support push the stock back the other direction closer to a state of normalcy or regularity. The market does not need us to feed it bran flakes to stay regular it has the Bollinger bands.

This is actually called Mean Reversion.

Mean reversion, in finance, suggests that various events of interest such as a break above the Bollinger Band, eventually revert to their long-term average levels.

This theory has led to many investment strategies, from stock trading techniques to options pricing models. When implementing this way of reading the Bollinger Bands you are trying to capitalize on extreme changes in the price of a particular stock, assuming that it will revert to its previous state.

I know, I know…. Youre thinking right now “But CJ this is just a theory, how can we trade off a theory”

I hate to break it to you but so is gravity and I’m not floating away, are you?

Let’s look closer and see if you can be convinced.

Here is your proof…

I am not going to just start spitting out the trades we have made money on using this exact technique (but there is a lot of them). No. I’m going to pull a few charts so I can show you this is currently happening across the board.

Yup, that’s right Snap is not a one off situation, these three are stocks that we talk about all the time, they are well known and on everybody’s radar. Today alone NVDA, QQQ, and META ALL spend two days above their top Bollinger Bands and then took a leg down as the train had to get back on the track somehow. 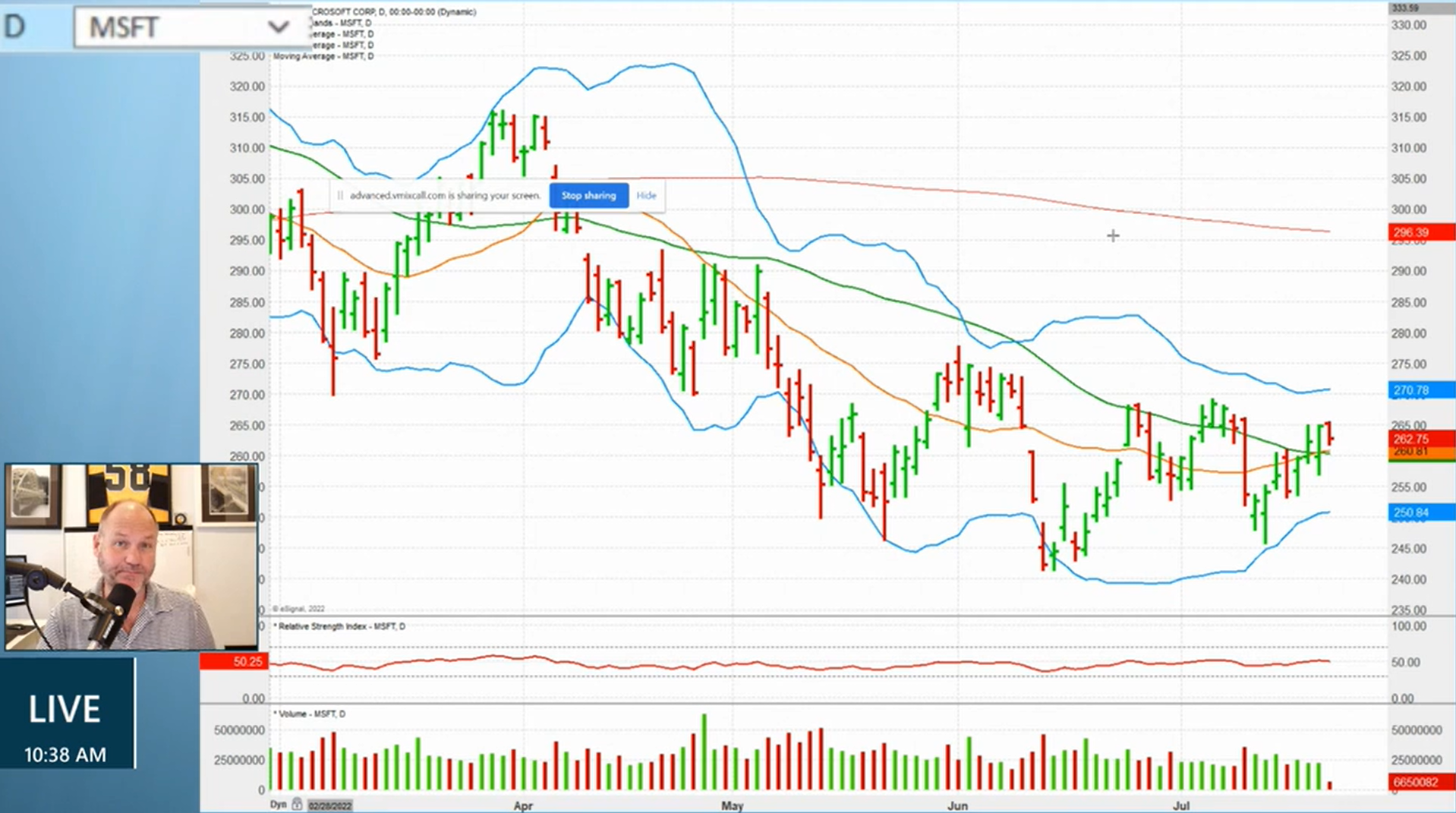 As you can see there are several periods this year that MSFT broke the bottom Bollinger Band. After two or three days of sneaking out of the house and waking up with a hangover it got caught, found the support, and got back to the 20-day line.

Really, I’m not just proving the power of Bollinger Bands to you. I’m proving that belief in the data and rules of the market are what make you money if you know how to use them.

Let’s take a look at one more chart before the weekend, this time on AAPL. 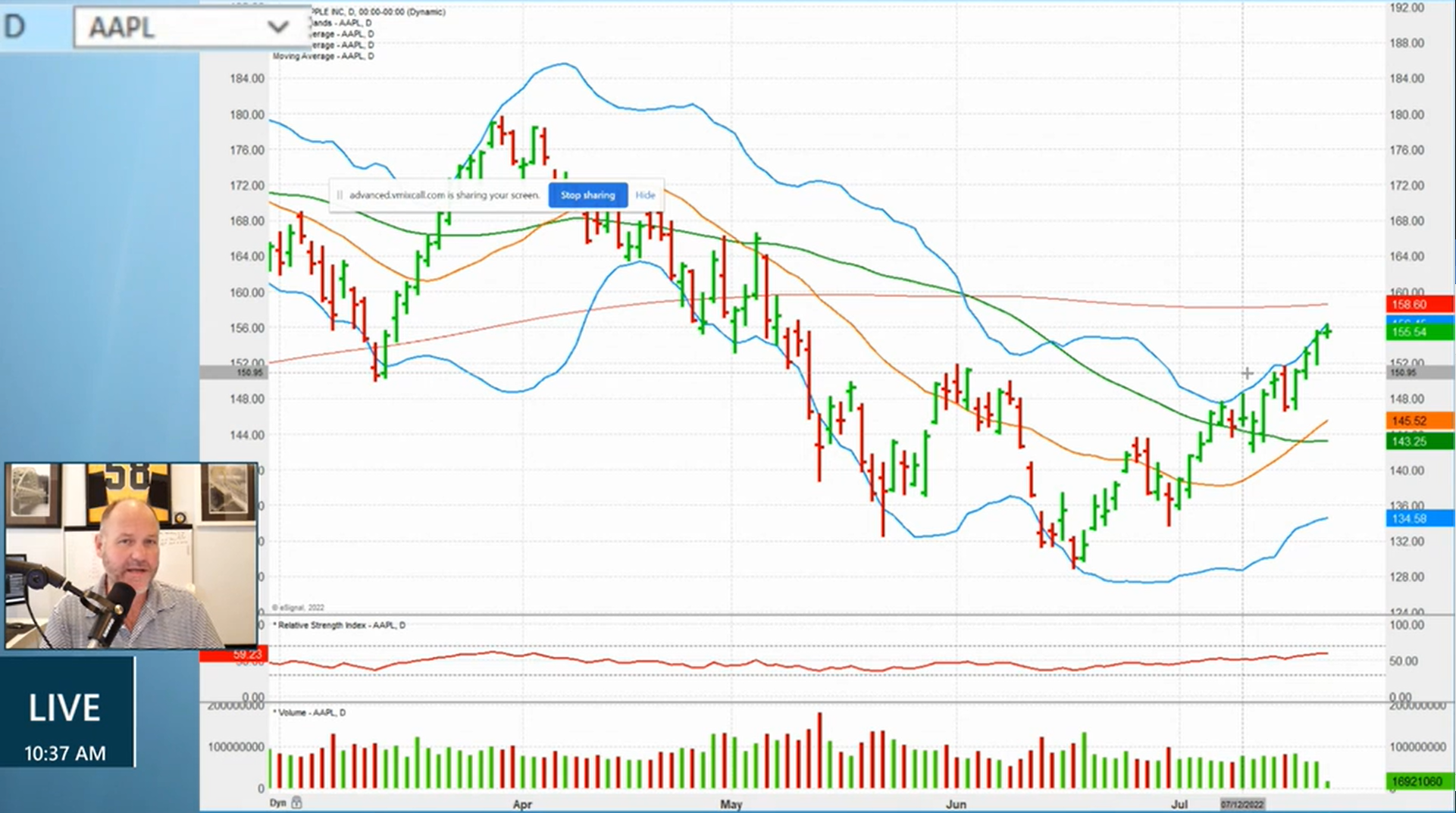 Apple might look like an example of what I am talking about, it is not quite there yet. Apple is going right through the roof right now but notice, there is never a break it’s just riding the rail. The company is set to report earnings next week and if you see a break right before then, itll be because the hope traders are parking their car and getting ready for a show.

Now when that break happens I’m sure you will know what to do, If not, I will. All you have to do is join my Night Trader crew, we may or may not trade apple but we are constantly able to find set ups like this. I will tell you exactly how to trade them so grab some profits.

I’ll see you guys next week, coincidently next week is the first REAL week of earnings where we have some heavy hitters laying it on the table for all of us traders to see.