Listen…. The other day Brandon asked me a question about inflation and because I was out yesterday I feel the need to bring it to light right here, right now.

Inflation, we are living in this mess day in and day out we know it is bad. After the CPI number came out it was pulling the market down in the trenches and was doing the exact same for the risk-on traders in crypto.

Investors and traders alike were just waiting in the shadows to see the CPI and PPI data hit the tape before they hopped into the market this week, and even though the numbers at first glance don’t look too bad the devil is in the details.

He asked me this “Why do we have to wait for a report to come out to tell us how bad it is before we react.”

I explained that we are really just trained to wait until the government comes and tells us what we already know….

Not to get political but it is true we can see by looking at our monthly budget that our dollar just isnt going as far as it once did… That is just a feeling to most people and they want the ‘facts’ to back up their instinct.

This reaction is primarily fueled by the amateur traders of the market that’s why we typically give an hour or so after an ‘event’ such as this to let the dust settle before we dig into what the technicals are saying is about to happen.

The Technical Side of Energy

In a recession you will see demand for oil go down, people are traveling less and driving less that is just the name of the game at this point.

But there is one hell of a buyer looking at getting some oil on the table right now, the U.S government…

I don’t know if you saw the news yesterday but the economic advisors for the president are looking to expand a program that expires in October.

This program is based around drawing from the U.S Strategic Petroleum Reserve.

Now this is causing some worry for a lot of people as they are thinking that the SPR is not meant to just lower gas prices, and youd be right, it’s not.

What is important to remember as this discussion continues is not why they are trying to lower gas prices, it’s not a political move, atleast not at the level we are looking at it.

We are keeping an eye on this because we are going to figure out a way to profit from this and really it should end up being pretty obvious by the end of it. 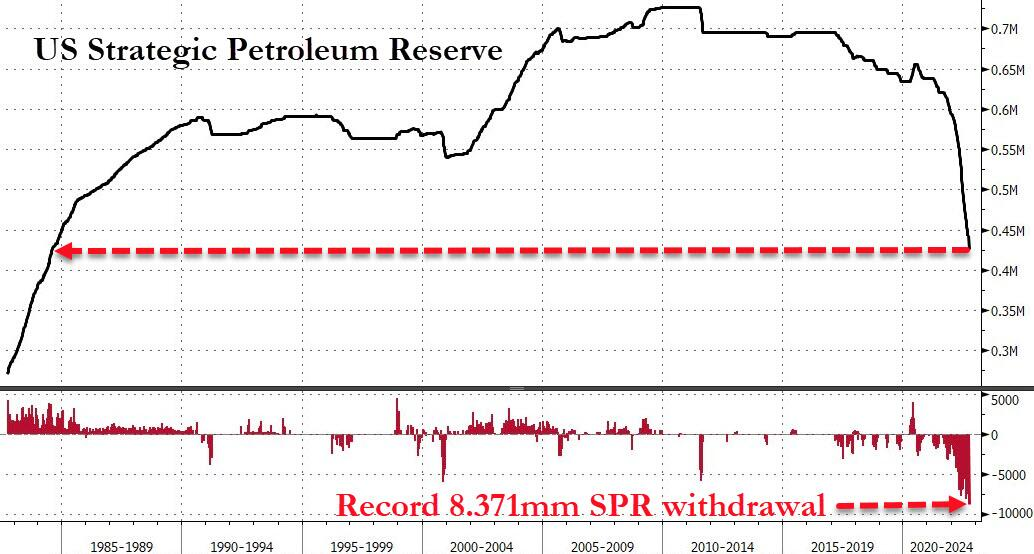 Now the SPR is at its lowest levels that we have seen since all the way back in 1984.

Now looking at this chart you can see we are in the middle of one heck of a drop and if this was a stock youd be a complete idiot not to be short whatever company it was for, regardless of your feelings.

At some point, we need to start putting something back into the reserve and hopefully at cheaper prices, but I’m not so sure that is the case.

Sure, the SPR is on its way down, but Oil and the related stocks are looking ready to make a short-term move.

Let me show you using USO 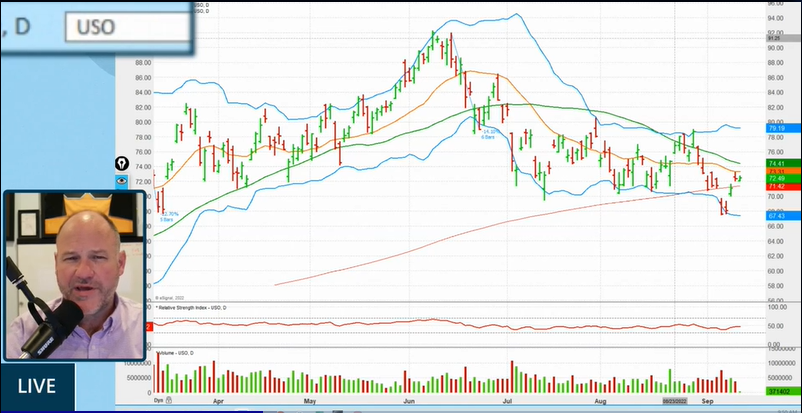 This chart right here is telling me that the refueling of the SPR might be a bit more costly than we would like.

You can see USO jumped up above its 200-day moving average over the last couple of days, this is telling me from a technical aspect that if we his the $67.50 mark that oil has at a minimum hit a short term bottom

This is just one example other companies in this group are doing the same.

Now, what does this mean for you? It means it’s time to trade a bit of the silver lining in the market.

How can you trade this?

Here’s the catch… we know that Jerome Powell hates the idea of inflation pressuring things higher so we have to maintain a stop on this position which is easy here… $70.

For those of you looking for a little bullish fodder right now, the energy sector’s coming alive again.

We saw some movement to the downside in the USO after the hot inflation numbers came in.

There are some problems with the energy trade that you need to be aware of over the next coming months.

The analyst community often goes too far to the extreme, because that’s what they do. They’re smart people, it’s just they’re looking way, way out, and they use some slow tools to do the things they do.

A recession kind of puts a damper on that. You’re going to start to see analysts pull back their expectations on oil prices.

Right now, we’re seeing some calls for $80. And then, yesterday on CNBC, I actually saw some brilliant technicians talking about $60 a barrel.

We know there’s going to be some price support from whenever the government starts buying for the SPR, but when you look at where USO is with that 200-day moving average, you know that we’re kind of falling into a bit of slippery patch with oil.

As you can see, it’s trading below the 200-day again today – this has been a constant battle over the last week.

Recent pullbacks could extend themselves. We will see. But keep in mind – a recession is bad for oil.

Now, let’s look at UNG, which has been putting in its own little battle. 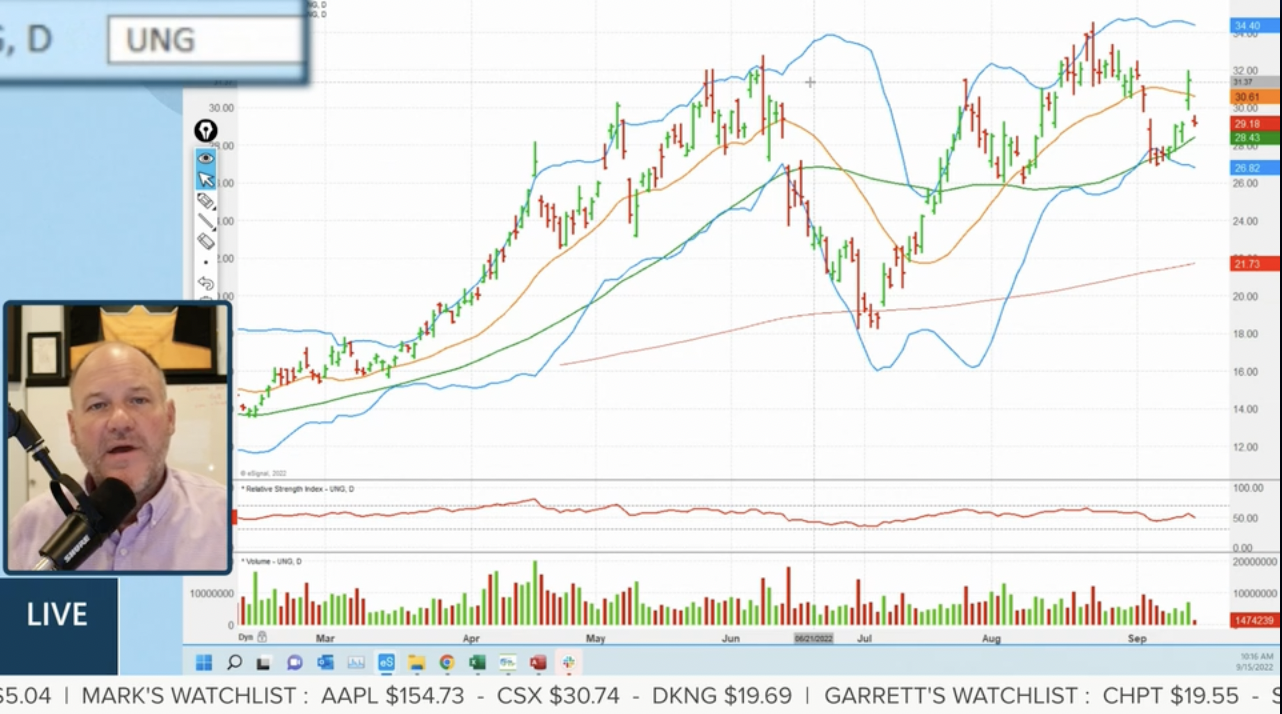 50-day moving average is down 7% today (though it’s still trading above it), it had a huge day yesterday, and we’ve seen some great things happening in the natural gas sector.

This is where the fundamental story turns positive. Keep in mind, winter will end for the natural gas trade before winter is over.

Let me say that one more time. Winter will end for the natural gas trade before winter is over.

What I’m telling you is, after we take out the $35 or $36 level on UNG, we’re sitting in the middle of November – maybe early December. That’s when the clock starts ticking for this trade to run out.

Because this is trading based on the demand that’s going to be coming over the next couple of months – not the next six months.

Things warm up in Europe, demand goes back down, and natural gas prices will pull back as well.

And then you’ve got coal… The dirtiest of them all. Coal’s going to be one of the quick fixes here. 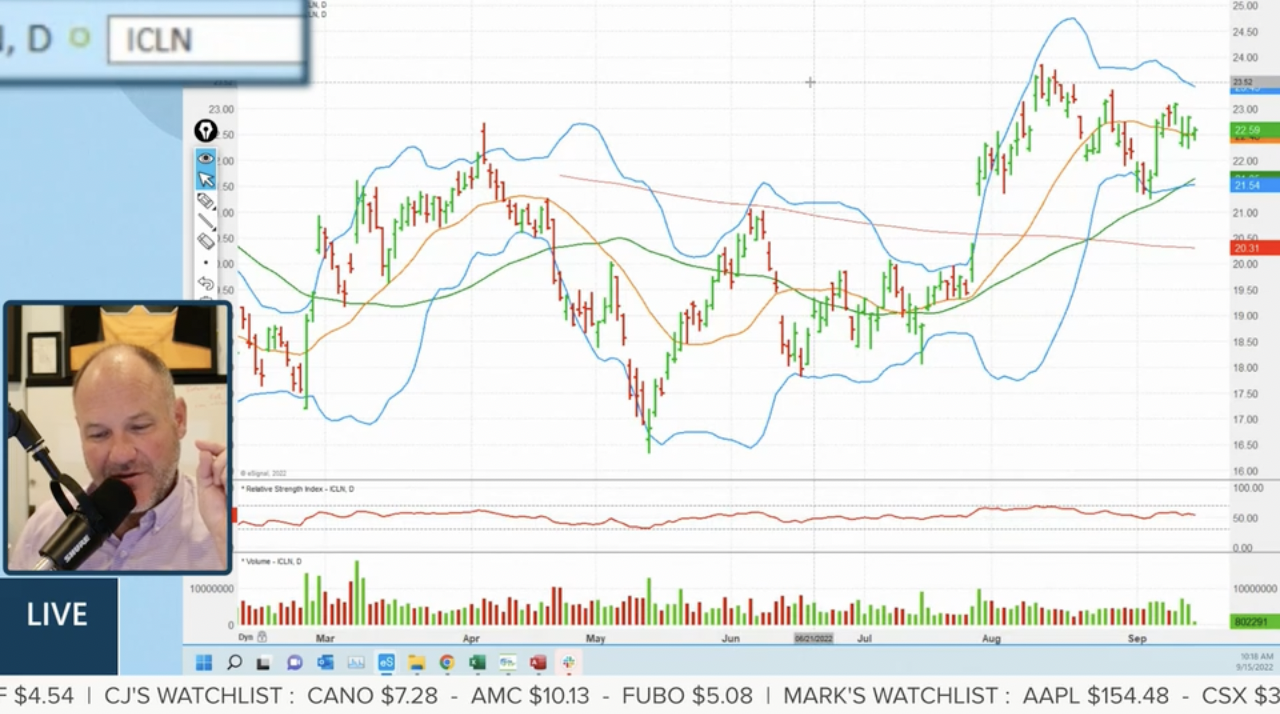 The ICLN will give you continued opportunities. Those long-term stocks that are two and three years out that I’m buying – some of them are in here.

And you already know that ALB is on that list (look for the $280 if you want to catch a little bit there).

But, this is the list that interests me the most… 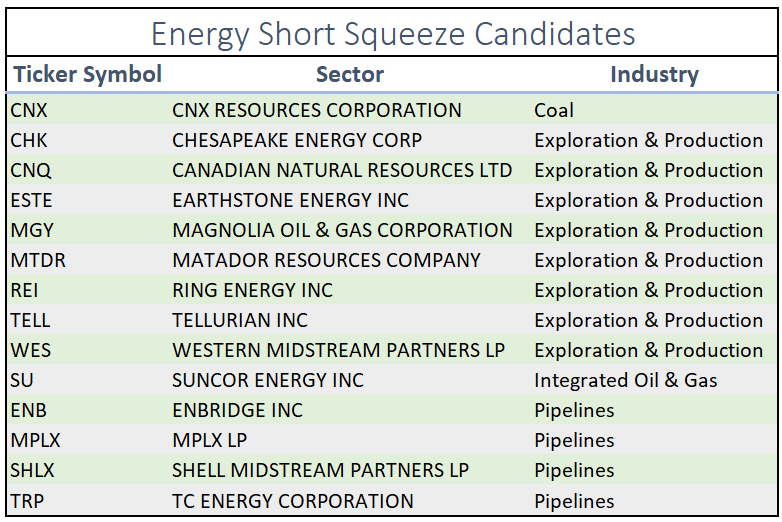 This is hot off the presses – the short squeezes in the energy sector.

If any of these come out and say what LNG just said – that they’re going to be giving all their money back to shareholders – that’s going to be the big one right now.

Bullish 50-day moving averages, short interest over six (and in some cases over 10) – so it’s a matter of time before these get the catalyst and the pop.

One of the better long-term indicators is that approach to the short squeeze.

So, keep your eyes on these sectors, because there should be opportunities in the next week or two.

Stick with me, and we’ll find them together.