Sometimes the stars align and a trade goes right in a big way. The result is amazing gains that you wouldn’t have dared to plan on.

This kind of trade doesn’t come along often, but when it does, you just want to tell someone about it!
What were your profits like on the latest smash we had with ANF?

Drop me a line and tell me about it! I’d love to hear!!

Forgive me for doing this so much but to be honest this has been happening more frequently than I expected lately.

That’s because this market continues to trade to the lower creating some amazing possibilities for those who anticipated it. The simple reason is that markets fall faster than they rise, and it creates monster trades for those who positioned themselves properly.

Investors never plan to sell. They plan to hold as long as the price of their stock keeps trending higher-something they assume will continue for years in the future.

When the price action gets so bad, eventually they decide they can’t hold on forever. But even then they don’t sell until they hear news that confirms the idea that they simply MUST get out of the stock.

When Abercrombie and Fitch (ANF) released its quarterly report yesterday, most investors expected that the news would be good, or at least okay enough to help them stay in the stock. If they had expected the news to be bad, they would have already sold.

But when company officials reported that sales beat expectations, but the company not only didn’t make profit estimates, they had a considerable sized loss, it triggered a scary looking selloff. The stock opened 33% lower than it closed the day before.

That meant that the 32-strike put options I had purchased were not just producing a little profit. They were generating monstrous profits! 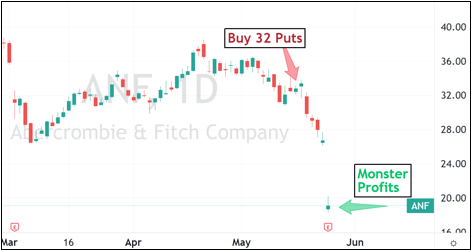 How did you participate? If you’ve captured gains over any of my last dozen winning trades I really want to hear. If you haven’t joined the fun, I recommend you tune in for the Wednesday morning show and get started!