I’ll show you how in just a little bit, but first I’ve got to set the stage.

As you know, I love food almost as much as I love helping you make money.

So, whenever I have the chance to combine two of my biggest passions for a tasty analogy, you better believe I’m gonna skewer it up and throw it on the grill.

Onions – one of the most versatile players in the culinary game – have layers (just ask Shrek).

On that note, the Fed’s John Williams took to the podium Monday and broke down the three layers of this current “inflation onion” we’ve been chewing on…

As it stands, they are as follows:

This is something we’ve talked about a little at the granular level.

Back in January, we discussed the “economic supercycle,” which has kind of reset itself and started over again.

Bonds always tumble first, then it’s equities, then it’s commodities. We’ve seen that here over the last six months, as commodities have finally tipped over.

And when they did tip over, it was lumber, copper, palladium, and some of these hard commodities that tend to give you some kind of indication of where the market’s going.

But it might make more sense to think about this as “trickle-down inflation.”

At the outer layer, the consumers’ eyes are not watering from the onion.

But when we get to the second layer – where we currently sit – that starts changing. Automobiles, furniture, appliances, airline tickets – all of these consumer discretionaries we’ve talked about that are infected by inflation are now in the crosshairs.

Suddenly you – the consumer – can feel your eyes start to well a little.

We’re talking about companies like Home Depot, Whirlpool, and Lowes. These are going to be that middle layer of the onion to tell you how inflation is making its way through the economy.

Lastly, the inner layer is the overall balance between supply and demand. That’s really where the magic happens. That’s where we’re trying to get to right now.

We’ve had a situation where demand has been way higher than supply. Even if the pandemic weren’t a factor, the difference between the two would still cause inflation.

So, we’re still peeling, looking to get through that middle layer.

But… at some point during the next 6-9 months, we’re going to start to see supply and demand balance out. And that’s the point where the Fed’s going to say, “Let’s take our foot off the gas here.”

Of course, that brings us to the biggest question – how do we trade that?

Well, this sets the stage for what’s to come in this inflationary cycle.

I’ve been telling everybody when we look at our Skittles Chart that I go straight to the heart of where those onion peels are coming off. 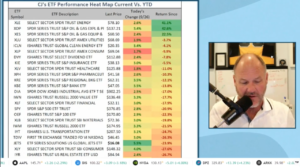 Companies like Aaron’s Company (NYSE: AAN), Brunswick Corporation (NYSE: BC), La-Z-Boy (NYSE: LZB), Home Depot (NYSE: HD), Lowe’s (NYSE: LOW) – all the consumer discretionaries. These are the ones that are going to continue to get bled as we see that inflation onion peel back.

That’s how you make money on it right now. You don’t trade the energy trade, because it’s going to whip all over the place (and eventually fall down).

Follow the onion. In the markets and the kitchen, honestly.

You’ll be better off as a result.