You may not like what I’m about to tell you, but it’s for your own good.

If you’ve heard it from me before, listen up again… There’s a reason that I’m going over it.

It is for your own good.

I first introduced this to my Money Morning Live folks almost a year ago when I started to warn you about how the market was heading to a euphoric top.

That was all the way back in November.

Sure, I was early, but I knew exactly what I was doing by calling a market top because of this chart.

The sentiment Is shifting, and it’s going to happen quick… If you take your eyes off of the sentiment cycle for even a brief moment right now, it could land you in an uncomfortable position.

From 5,000 feet, this is all because of a few key triggers I’ve been warning about for nearly a year. Without fail, the market’s landed exactly where I expected each time something happened.

I will continue to hammer this into your head so you NEVER forget it.

Because of the shift in sentiment, I want to break down these four stages for you again so you can see its accuracy. But, more importantly, so you can see where we are and what to expect from the road ahead. 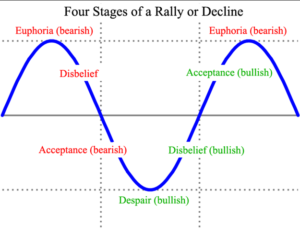 At a market top like we saw last November, you will experience euphoria. Investors started to think nothing can possibly go wrong in the market.

Despite the good vibes usually associated with the word, euphoria is bearish for the market.

When everybody in the market is buying left and right, it pushes us to an extremely overbought reading, and selling pressure is at a high.

All it takes when everybody is fully invested is one little rattle or shake in the market. People were already considering taking their gains and running to the bank, so any little push forces the market to roll over and start trending down.

This is where investors try to talk themselves into a safe place. They tell themselves, “We are not going into a bear market.”

We are all human here (except Brandon, nobody is that happy all the time). We try to justify staying in a position.

There are all sorts of thoughts investors and traders have during a period of disbelief. They say things like, “It’s just a small dip,” or, “The markets are strong, they’re going to make a run again.”

As you know, this describes the past couple of months in the market. This resulted in a lot of disconnects and irrational movement.

During the acceptance phase, everybody starts to throw in the towel and say, “Forget it, we are in a bear market – I need to get out and preserve what retirement savings I still have.”

This is when we start to see massive selloffs take place, which forces the markets down lower and lower, regardless of how much it fights to pull up.

The acceptance phase is one that we would not walk into on our own.

This needed a trigger to force us to understand what is going to happen next.

Well, Tuesday’s close was the first time the S&P 500 breached June’s bottom. Think about it… How many analysts were out there pounding the table about how this time would be different and the market was resilient enough to finish its bear market run in June.

Then last earnings season came in better than expected. Suddenly, the bulls shoved the bears out of the way in a bold move that made almost every bear out there question their outlook.

But then, something as simple as a line turned everything back around, and now, we’re right back at that June bottom, which is now something so much larger.

It marks what I’m going to refer to as the official entry into the Acceptance Phase.

For the ignorant, this stage gets messy.

For the unwilling, this stage is devastating.

For you… it’s a great chance to see some extraordinary profits.

The good news? There’s only one more stop left on this pain train… Despair.

The bad news, it’s not going to come easy.

This stage is kind of the class clown of the group. It is a time that nobody wants to buy a stock.

People tend to be a bit skittish at this point. After all, they’ve lost a lot of money and refuse to think the markets will ever come back.

I’m going to let you in on a little secret… It always comes back.

The stocks have hit their bottom at this point. We will be sitting on the true floor of the market. It’s the buy-the-dippers’ wet dream; nowhere to go but up.

This is the first stage of the market that actually transitions us into a bull market.

And you know what? When we make it past the acceptance phase and we reach despair, my Penny Nation and Night Traders are going to be using the exact same indicators to ride the wave back up.

That is the beauty of technical trading – no matter what moves the market, the data will tell us exactly what is to come and how to trade it.

What Should You Expect From the Acceptance Phase?

Redemption Risk stocks are now on the table as mutual fund redemptions will surge. This forces even the most bullish of fund managers to press the sell button to generate cash (which they are required to maintain) as they continue to get requests from their investors for cash.

Remember how Michael Burry was able to just tell Scion’s investors that he had closed the redemption window? That’s not an option for Fidelity, Vanguard, Blackrock (the biggest), and others.

Same goes for the bond market and its funds.

So, why do I tell you all of this? Fear mongering? NO! This is reality.

I go through all of this so that you know what to expect and so that I can help you either recognize it, so you can sit in cash (which is an expensive thing to do with inflation eating away at spending power), or choose to engage the market with my Night Traders and I.

What’s Going to Happen Over the Next Month?

There will likely be a short-term bounce, and yes, some will claim that it is the “real bottom.” Don’t believe it. We are just having some zombie cats in town for Halloween.

I’m going to set another trail of bear traps in the market using the same approach I just used to turn the last two weeks into a few of the best weeks in a while, both for my subscribers and for myself.

Or the following will happen to prove me wrong

History (and my experience) tells me I’ve narrowed down the odds pretty well above and that I’m going to be on the right side of it again in the not-so-distant future.

And then I’m going to do it again.