I was looking at a stock, Thor Industries Inc. (THO) – an American RV manufacturer. Everything about the setup told me this stock was ripe for a fall. The technicals, the fundamentals, the state of the market – they all pointed toward a big, fast drop in THO. It was a “sure thing.”

So I made a put trade, hoping to cash in as the shares dropped like a rock.

But I’m not sweating it. In fact, I plan on executing a special kind of trade that can not only claw back what I’ve lost, but it should put me firmly in the green, with a nice profit, before it’s all said and done.

Let me show you how it works…

So I picked out my target, THO. This company makes recreational vehicles, and consumer discretionary stocks are in bad trouble right now. I mean, they make campers – have you looked around lately? Everyone has a camper. 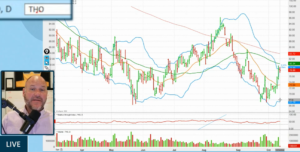 Just look at this thing. It’s screaming “I’m going down.”

THO started running up and should have been knocked right back down as it met resistance at the 20-day moving average. I had a target in mind of $68 just above the bottom Bollinger Band, where it would find support in the market, as this is an indication of an oversold position. That means it’s undervalued, and people will start scooping the shares up without thinking twice.

But the thing is, it didn’t… Let me tell you why – and what I missed.

Ten percent of the average daily volume belonged to people who were shorting the stock. Worse yet, only 15% of the shares were actually available to purchase.

It’s like trying to fit a camel through the eye of a needle – everyone is covering their position and buying shares, but the spike in demand is unable to be supported by the supply of shares. Meanwhile, the bears get squeezed as they try to squeak out of the position with a little bit of dignity.

I stepped on a short-squeeze booby trap.

This was my mistake, now I’ll fix it.

This is how I’m going to trade my way out of this….

I’ve got some time on my side with this trade already. I just don’t have the space I might like, but that’s okay.

50-day is still trending lower right alongside the 20-day.

Top Bollinger Band is still putting up a fight and adding a lot of resistance to the stock. The volume had dropped off the face of the planet. Buyers are getting out as winners right now, which will increase selling pressure for the stock to fall right into my lap.

With that out of the way, I start to look for a $72 target and I double up on my $70 puts in that account. I may even add a little kicker of a $75 put just to sweeten the deal.

This doesn’t work in every single situation; I really will only use this technique on a position where NONE of the drivers that got me into the trade in the first place have changed.This process may seem a bit counterintuitive, but my Night Traders have seen me do this before. We call it the “I-want-my-money-back trade.”

As for the $75 put I’m considering, that is just me ratcheting up the strike price a tad to gain a bit of leverage on this series of trades.

After a quick study on THO and its two-day 10% rally, here is what I found…

Over the last five years, every time there was a 10% rally in a two-day span, the stock ALWAYS dropped 12% over the next ten-day period.

I know I’m on the right side of this trade.

I’m going to be walking you through this in the morning show. It isn’t often that I get the opportunity to show you this process – mostly because there are not too many trades that go against me.

We use this tactic and stay in the trade because we know what the stock is going to do it’s just a matter of slowing things down and letting the market do its work, because ours is done.

As this continues to play out you’ll be watching it right along with me and I’m going to let the market be your proof as to why my technical trading strategy is the one thing you should be working towards perfecting – when you do it will pay you back tenfold.