Alright, everyone, it’s time to stop asking about the Santa Claus rally.

It’s not coming this year.

This is going to be a year of reflection, thought, and maybe a little fear.

However, there was something yesterday that was extremely interesting – the beginning of tax-loss harvesting.

How I Know Tax Harvesting Is Underway

When I see companies like Tesla Inc (TSLA), Alphabet Inc Class A (GOOGL), Microsoft Corp (MSFT), and Apple Inc (AAPL) sliding, that’s all the evidence I need that people are starting to pull their money out of the markets.

After all, those are tickers people have been buying and holding as investments. Well, that’s not the case right now. Take a look at where AAPL’s sitting at the time of me writing this… 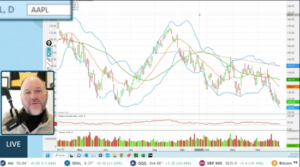 Now down 26% on the year, this is the first time in a long time people have looked at AAPL and said, “Holy cow, I can’t believe I’m holding AAPL and it’s losing going into the next year.”

So, rather than sit on their hands and get bludgeoned, people are trying to recoup anything they can. While it isn’t going to be a profit, it can be a bit of tax relief.

As I said, if you sell an investment at a loss, you’re allowed to use that loss to offset gains and income.

Usually, this is not something people are in a rush to do. However, in this recessionary market, you’re seeing more and more folks take this route.

The thing is, this is different than people shorting a stock and pulling the money, waiting for the next opportunity to put it back in and pull back out.

No, the money people are pulling out of tickers like the ones listed above is money they expected to have invested for decades. That is not money that’s meant to be sitting on the sidelines, as it is now.

With tax-loss harvesting, December 31 is a key date.

For those who take advantage of this tact when they file their taxes in April, they must officially take that loss in 2022.

The Dominoes Are Set To Fall

I’m expecting AAPL (and the QQQ on the whole) to continue to drop as the current year runs out the clock.

But I am looking at January 1 as a date for a pop on the QQQ. After all, in the long term, I think most people are reasonably bullish about the prospects of these shiny tech companies.

In the short term though, I’m looking at a target of $100 for AAPL once we start to figure out the true valuations that are out there in terms of cash flow and how interest rates are affecting them.

If it hits that $100 mark, that’s when I’m going to start nibbling on some granny smiths, galas, and honey crisps and buying up some Apple shares.

On that note, for AMZN, $75 is where I’ll start dipping my toes in and selling some puts. For what it’s worth, that’s a stock that still has another 15-20% of downside potential in this current market.

After all, Amazon has propped up Amazon Web Services as some panacea for its operations. Well, if businesses start pulling back on their business-service spend, that affects AWS.

So, AMZN has cause for concern on both sides of its business-plan coin. On one hand, the everyday retailer is going to start pulling back a little bit here with inflation still high, the market sliding, and credit usage on the rise. On the other side, they’ve got the backend business service that they’ve got to worry about slowing down.

All that said, January 1 won’t be a massive, powerful rally.

That’s because we’re talking about a smaller pool of money with these tax-loss harvests. The money that’s going to drive things, that’s not going to be coming back into the market anytime soon.

I am not expecting a full-on bull rally until those big-time investors get off the sidelines. As is, they’re still quaking and shaking in the corner, wondering why CNBC can’t tell them what is going on with their stocks. For that reason, they’re going to sit idly and wait until the market goes up 20-25% before they start taking action.

With that said, we can still make a pretty penny off of that pop and set ourselves up for success when those institutional investors get off the sideline.