Yesterday I asked my feverishly handsome friend Mark Sebastian if he has seen money flowing into the lesser watched areas of the market.

Together, Mark and I find a big money trade on XLE in this video mark showed us exactly how he outsmarts the inside money by finding the better trade than they are making. Check it out! 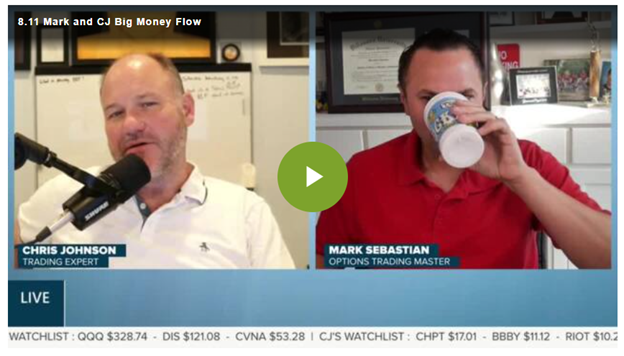 He saw that there was a put sale on XLE that goes out to December. The trader that made this trade was originally short 100,000 of the $60 September puts. They then covered them by selling 50,000 December $70 puts.

Now his strategy for finding a trade here is to look at the stock and find the trade that is both faster and better.

We ended up pulling the chart for XLE and looking at the available options contracts and by looking at the implied volatility for both the December quarterly option and the November monthly options he felt there was a trade that could be placed on either of these options.

Now we agreed that we would go for the November options because that trader put a bit of a dent in the implied volatility by themselves.

We also saw that November was about 40 cents more but that’s okay, you are paying a bit more to avoid the extra month of exposure. Although I love to find a deal I’d rather pay a bit more to beat the big money trader and be out before they even know what is going on.

You see the Big money traders know stocks, but they don’t know options like Mark and I. He said it best when he explained we can take the trades they are doing and just do it better.

Enough about the Big money.

The Bulls are Running Thin

Did the buyers suddenly dry up or was there something else going on in the market on Thursday?

We didn’t get the confirmation that we needed right away from the market on the heels of the PPI numbers that should have stoked the bullish flames even more.

What’s worse is that the sector ETFs started acting a little out of school again, which is a sign that the traders out there aren’t willing to push things too far on the bullish envelopes.

Interestingly, the MEME stocks were able to hold things at bay while we saw mixed results from names like AMC, BB, BBBY, and others.

It’s actually really interesting these stocks are bouncing around and in a bit of a contemplative state, not wanting to break higher for an actual run up as opposed to a random spike like we are seeing across the market.

If you look at these charts, any one of them, youll see the stock riding the top Bollinger Band and because these stocks are being artificially inflated by the volume spikes we get to a point where this indicator essentially will tell us nothing of value.

When we see an outlier like this we need to focus on indicators that are a bit more concise for these situations.

Let’s take a look at AMC as an example. 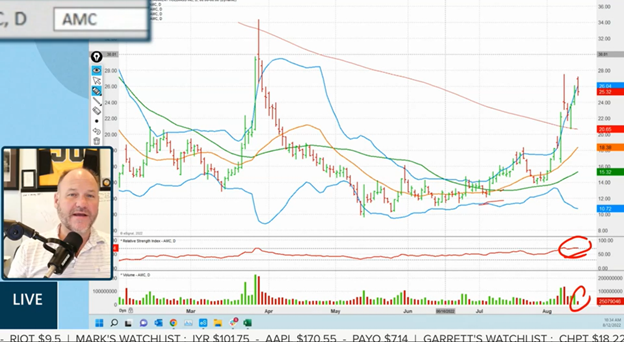 The two things I would watch on this chart. It’s not the moving averages or the Bollinger Bands, rather watch the volume and the Relative Strength Index (RSI)

Volume as you know, is a trader’s best friend. If there is no volume the stock won’t move any higher. This is as clear a picture as you can get of crescendo volume. Now that it’s had its run the fuel is draining out of the tank and the volume dropped off.

As a matter of fact, the volume is so low right now that if the MEMEsters start to get a little jumpy and sell, we are going to see the trap door open and a lot of people are going to be in deep waters trying to stay afloat.

RSI for those of you who don’t know does something similar to the Bollinger Bands just in a bit simpler manor. It will tell us if a stock is overbought or oversold indicating what direction the stock should be moving next. An RSI over 70 is considered over bought and under 30 is considered oversold.

Right now, AMC has had several days over its Bollinger Band and RSI over 70 which tells me the slower of the MEME rally traders will probably get bitten by the bear in the coming days.

Watch this with me as we see all of their trades fall from the heavens and their profits right into out laps.