The market is setting itself up for failure. We are seeing too many forward looking plays, it’s getting ahead of itself right now and I fear that it’s going to get messy.

Do you think that we are going to continue seeing rate hikes after September’s meeting or are you expecting it to go the opposite direction?

Here is a little chat I had with Garrett yesterday that will give you a better idea of what to expect coming from the Fed post CPI and PPI numbers. 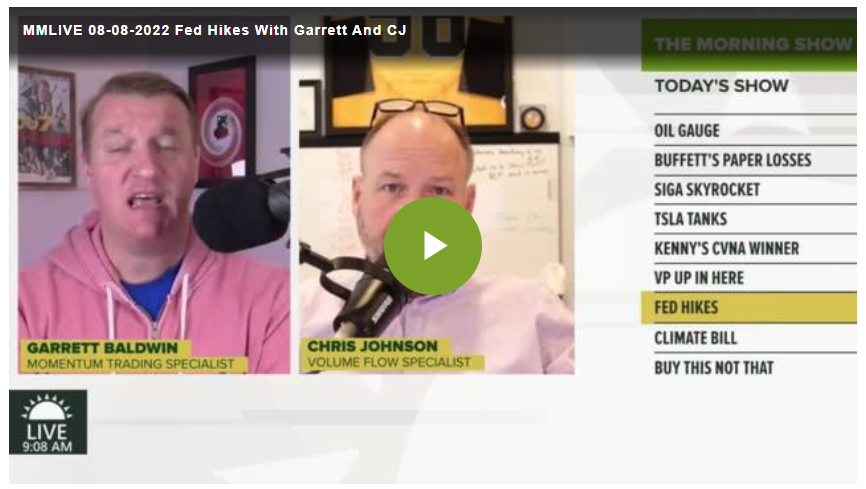 Here is a more detailed outlook on what I expect from the Fed post CPI and PPI numbers. As well as a way to capitalize on the possible outcome.

OK, literally, this is usually one of the easiest things that I do every week… look at the calendar and the technicals and put my pin on where the market is going to go over the next five days… This time, not so easy.

The last week, while showing some excitement for both the bulls and bears, really didn’t do much to stimulate the market. In other words, we’re getting to the boring part of the earnings season (or as Kenny would call it, a bit of a nothing burger).

That said, there are a few companies that I am stalking, including Disney (DIS). Let’s face it, even with gas prices dropping we’re not likely to see an increase in DIS’s outlook. I’m getting ahead of myself, let’s look at the rest of the list in a few minutes for interesting charts ahead of earnings.

And PPI numbers set to come out Wednesday and Thursday respectively. To be honest with you Disney coming out with earnings will likely be overshadowed by these numbers as they are a bit more relevant to the current situation as a whole.

For good reason, these numbers are a good way to gauge how much rent and food went up. We are also going to see how much energy went down and did it really offset the addition money being spent other places? My guess is not so much, or at least not as much as everybody is thinking… stick with me this week and I’ll be here to explain the implications of each number as they come out and the best way to position your portfolio in the coming weeks.

We’re going to talk about the Fed a lot this week with the latest CPI and PPI numbers coming on Wednesday and Thursday respectively….

The markets appear confused over the latest actions by the Fed as “the crowd” has clearly come to the conclusion that the Fed’s work is going to be done soon and they’ll quickly shift to a dovish view to help nail this “soft landing”.

The Fed Heads were out in numbers last week trying to deliver the message – softly – that their work is far from done and that it does appear the market has tried to get in front of itself in proclaiming the end of inflation.

Side note: it’s kind of funny that the market is doing exactly what they have called the Fed out for doing last year… looking past inflation as if it were transitory.

There were several reports I read over the weekend talking about this one from Bloomberg specifically would be a good one if you want to do a bit of reading. 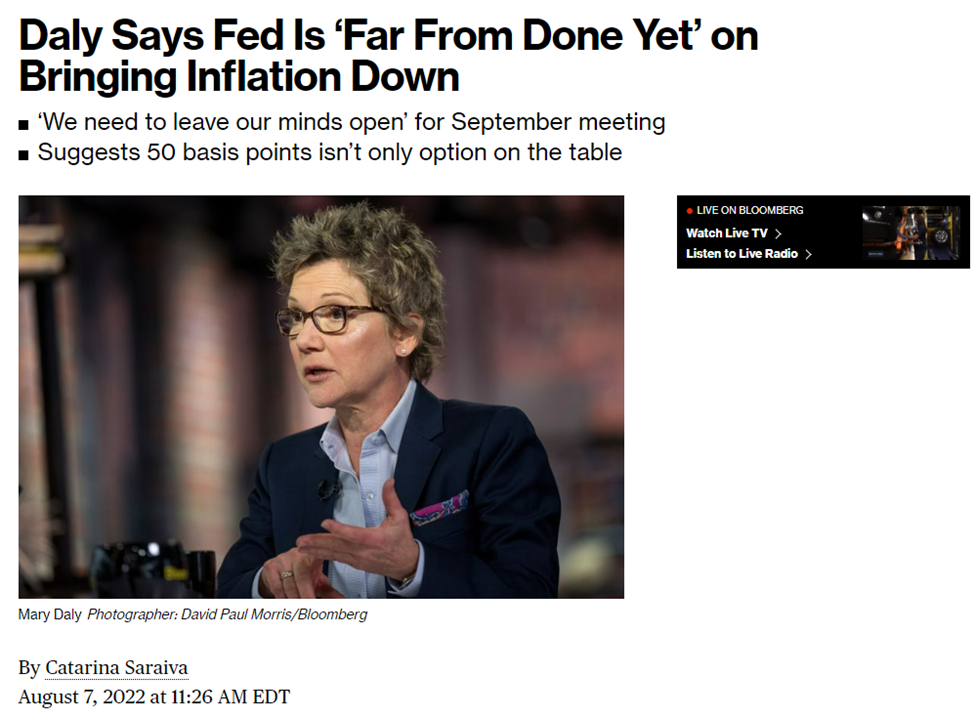 Mary Daly said in an interview that a 50 basis point hike is ABSOLUTLY on the table still even touched on the fact that another 75 basis point hike may even been necessary… they are going to keep the high rate hikes as an option until inflation is declining, not just at a peak but actually declining on a month to month basis.

Now in my eyes a 75 basis point hike is almost a given, youre paying the bills to and given that my community is a bit more in tune than most I would think that you agree. What happens after that? Well they have already come out and said, we have to look passed September and keep an open mind because they know – just like you and I – just one more hike probably will not put the fire out.

What we see in September is reliant on what comes out this week. If the inflation rates stay, for the most part, unchanged or even increased you should expect the Fed to follow suit and probably up that to a full 100 basis points next month. They are working quickly but what they do is a bit of an art from they want to bring down inflation and at the same time avoid the market going up in a ball of flames due to even more aggressive selling by the market as investors try to put the “genie” back in the bottle”.

How to Capitalize On an Aggressive Move by the Fed.

In the case of a more aggressive moves by the Fed and increased volatility as a reaction I have the trades that youll want to be in to take advantage of this situation.

Now I’m not talking about all the FOMO people that are still in the Reddits top 5. We are going to start to focus on the markets again. I’m talking about companies like AAPL, MSFT, and NVDA, These companies that represent a cross section of the investments done by both the institutions and the retail investors.

Depending on the stock you are looking at these companies have rallied 15-18% roughly but let’s take AAPL for example: 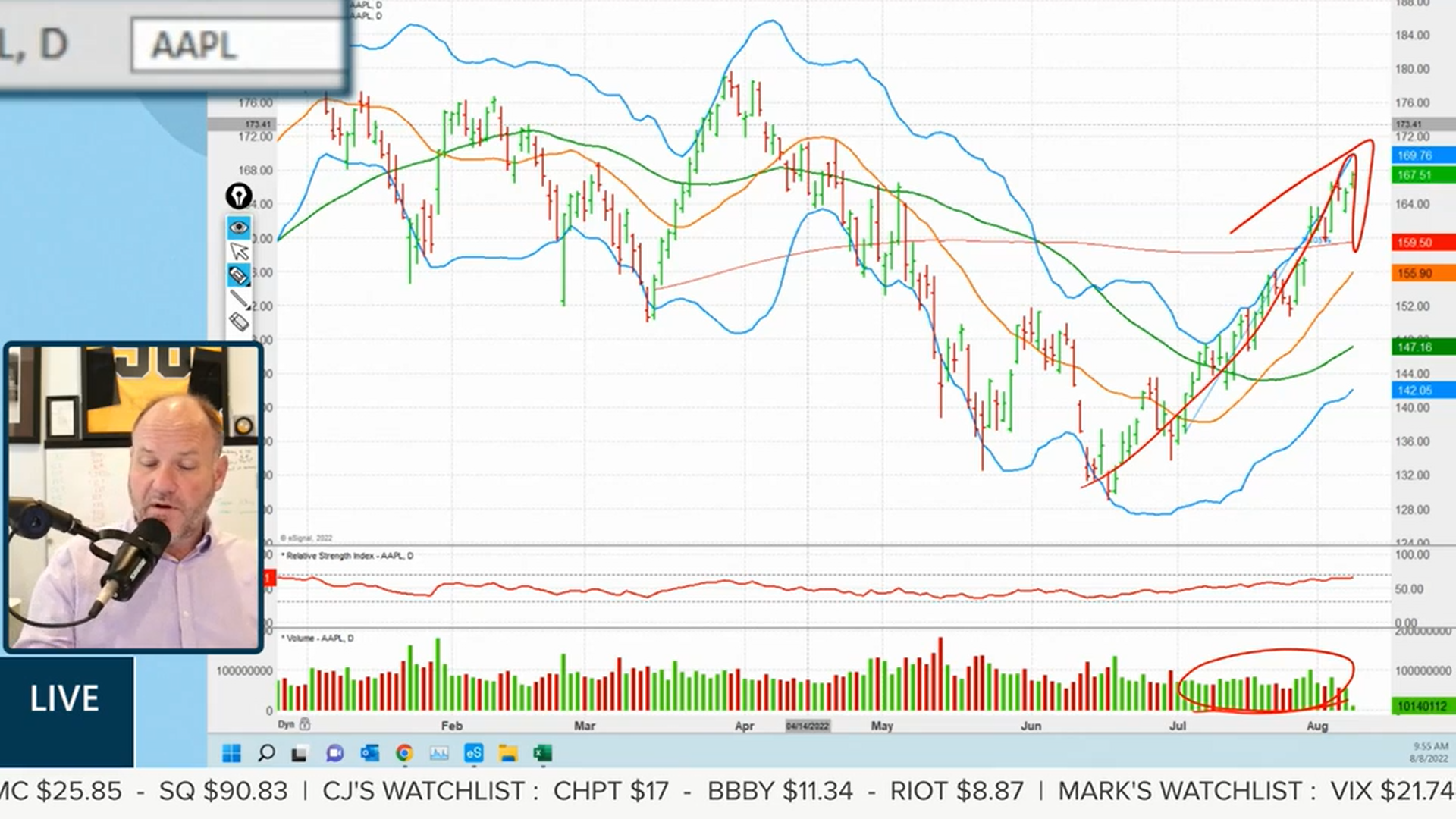 AAPL is currently trading around $170, which might not seem like a big deal but keep in mind it was in the $150’s about two week ago… investors are continuing to pile on this stock and drive the price higher and higher.

What does that mean for the CPI, PPI, and most importantly, the Fed? You can see in the chart right now that Apple is getting to the point where it is a bit overbought in the short term. When we get the new CPI and PPI number and the murmurs around the Fed start to hit your ear we will start to see a bit of leveling off of expectations and that is when you start to see panic in the market.

Takeaway: Look at the area of the Nasdaq 100 that has been bought the most, it is large cap Tech stocks. It is growth based this is because growth has the most to dish out when interest rates go up. If the Fed comes out with more than 150 basis point over the next 6 months or even gets to the point where they are not expected to lower rates in early 2023 these stocks are going to be put on notice.

Look, I get it. There is a lot to understand here, this is not me trying to be an adversary, it’s simply me understanding that the market is continuing to march on based off the music it hears. The danger here is people have done a great job at discounting what the Fed has already done and the market is unwinding what they have been feverishly working to do.

With so much to understand due to how complex this concern is, having to watch your portfolio, and continue to live your life I completely understand the predicament you are in… That is the reason I have more to offer than just the morning show each day. Take a look at my night trader Offer, let me be your guide and take even just one thing off your plate and give you a little more breathing room. I want you to be in good hands and be able to sleep at night just like the rest of my premium members.

We will talk more about this tomorrow and the rest of the week so be sure to join me when you can.