A “cooler” CPI sent stocks on the strongest rally we’ve seen in two years. The problem is, “deceptive” is a much more useful descriptor.

This is 100% a bear market disguised as a genuine recovery. I’ll show you why.

It all starts with context.

Earnings, the midterm election, the CPI report. Outside of a few companies in the retail sector – Target, Walmart, etc. – due to give their numbers this week, the wild beginning of November is behind us. (By the way, those value-forward retail companies tend to do particularly well during lean economic times.)

The CPI was the thing I was watching closest, and for good reason. We see the impact that it has on the markets and sentiment.

But, now that those major shockwaves from the past two weeks are behind us, we’re going to start to see stocks settle into their end-of-year trends. This will play into our hands, whether it be in the form of breakouts or breakdowns.

This is the week that will really start to clarify the direction of that trend.

Those events I mentioned before – those shockwaves – are a common driver of volatility. People want to trade the expectation before and the result at the end. All of that is noise – it isn’t a true indicator of the market’s direction.

However, now that the CPI and PPI came in under expectation, the rally we’re experiencing – short-lived or not – could take us all the way to the end of the year. There won’t be any CPI talk until the new year, and as we’ve seen already, people are looking for a reason to buy.

That’s before even mentioning the annual “Santa Claus rally” we see around the holidays.

All of that is to say I’m going to watch the market closely this week to pinpoint our strategy.

The beauty of letting the market come to you is that we’re going to profit regardless.

However, there is more than enough evidence that the smart money is on this being a bear rally – perhaps nowhere more noticeable than in the energy sector.

While the 1.8% increase in energy inflation is signal enough that The Fed might not want to loosen constraints quite yet, there’s more to the story.

Last week, I talked about how the safe harbors of the markets – the places where investors park their ships to avoid the worst of the weather – appeared to have shifted.

Energy is traditionally one of the safest of harbors during times like these. So, when energy started acting wonky and people were flocking to the DOW, it perked up my antennas.

Well, a few days later, that wonkiness appears to have normalized.

Take a look at this chart for our old friend XLE – a.k.a. the Energy Select Sector SPDR Fund… 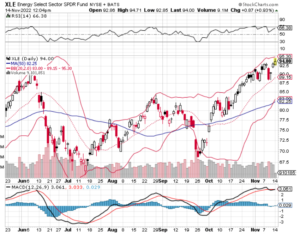 This chart shows almost no indication of rolling over anytime soon. Outside of last week, it doesn’t show any signs of volatility.

If there’s any volatility to come with this index, it will likely only push the price further upwards, since we’ve already passed recent highs.

Energy is back to being a good place to dock your ship. That means these traders are feeling particularly risk-off right now, they’re similarly selling the idea of this being a bullish transition.

So, if you’re looking to follow suit on the safe harbor side of things, XLE is always a good bet.

Another stock that caught my eye in the sector is Valero Energy Corp. (VLO). It recently reported a solid beat on Q3 earnings. On top of that, forward guidance was nothing less than inspiring, as Valero’s bosses don’t see any demand slowdown in sight. That means no business slowdown, which bucks the trend of what we’re seeing in the global economy.

Plus, with demand for gasoline and diesel in Valero’s wholesale system now well above pre-pandemic levels and the diesel market still supply-constrained, its margins will remain high.

That supply-and-demand aspect is particularly key – it’s maybe the biggest reason I like VLO.

The situation with diesel is becoming particularly dire. Temperatures are dropping quickly, and the war in Ukraine has Europe in a chokehold.

You’ve heard me say “risk-on” and “risk-off” before in regard to market sentiment. Let me quickly explain what I mean by that.

When we saw the market rip and roar through the pandemic into early 2022, people were not shying away from much of anything. That tends to happen when everything is going up – you are far more inclined to make riskier investments. Traders were very much “risk-on.”

Well, treating energy as a safe harbor is a “risk-off” approach. You’re not looking to leave yourself exposed, opting instead for steady gains.

By the way, I’m far from alone on VLO.

Garrett Baldwin has been beating the energy drum hard for the past six months, and he is similarly bullish on its prospects. However, he has tons more where VLO came from that need to be in your portfolio before the diesel shortage officially hits.

I don’t want to step on his toes, though, so find out more by clicking here.

That does it for me – I’ve got a plane to catch.

I’ll see you guys bright and early tomorrow morning in the main room for The Long and Short of It.

By the way, I’ve been keeping a close eye on the market from The Sunshine State, and there are already a few trades looking mighty appealing.

We’ll get into all of that and more tomorrow. Talk to you then.