Back in September, I showed you XHB – the SPDR S&P Homebuilders ETF – was performing outside the bounds of rationality.

In the months since XHB has clawed its way out of that hole and returned back to its previous $60 level. In fact, since November 10, it’s never fallen below $60.05 or traded above $63.29

This ETF is currently treading water as we approach the new year. Well, I’m here to tell you the homebuilders aren’t done hurting just yet, and this ETF won’t be able to avoid sinking further.

There are going to be moneymaking opportunities in XHB because there’s still optimism in the industry.

We’ve seen some recent headlines that despite housing construction dropping for a third consecutive month and the confidence of single-family homebuilders falling for a 12th straight month, there’s hope the bottom is near.

Well, the bottom is not here – there’s more turbulence ahead for XHB and similar ETFs and tickers.

I mean, heck, construction prices are still up 30% from their marks at the start of 2022. There are still all kinds of supply-chain issues, labor shortages, and material cost fluctuations complicating the homebuilders’ industry.

In that September piece, I showed you the chart for housing starts, as July marked the lowest figure in more than a decade.

Well, things haven’t gotten all that much better…

Sure, the 1,377 from July remains the bottom, but despite briefly rebounding above 1,500 in August, it’s continued to fall.

Meanwhile, despite mortgage rates falling a bit – down to 6.3% from 7% – that certainly isn’t going to get prospective buyers lining up when they’re still up basically 100% since January.

Now roughly two-thirds of homebuilders are trying to incentivize the buyers to bite by offering things like mortgage rate buydowns and price reductions.

That’s because homebuilders are starting to reach a dangerous point.

In November, the total percentage of new projects dropped by 0.5% compared to October. Meanwhile, the percentage of completed construction increased by 10.8%.

We’re seeing the fallout from the free-for-all pandemic housing landscape right before our eyes.

I think it’s still going to get worse before it gets better here.

But the key here is the timing of the next fall.

Here’s the latest look at the XHB… 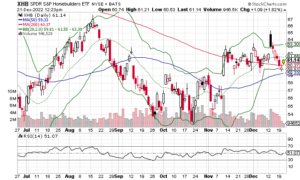 Generally speaking, the 200-day moving average (200MA) – which just so happens to be Warren Buffett’s favorite – shows the long-term trend of any stock or index. Well, the MA200 of XHB is trending down on that chart.

I’m not talking about January or February, or even March expirations on this.

I’m looking at that six-month timeline. I’m running contrary to what the sentiment is here among homebuilders.

So, while they’re expecting better sales come the start of Q3 2023, I’m going to be buying June and July expirations. This is something that’s going to go down, it’s just going to take a little time to get there.

But that time sets the table perfectly for my top trade of 2023.

This isn’t just the homebuilders. I’m seeing technical red flags across so much of the real estate world.

In fact, there’s a well-known company that I have earmarked as my favorite trade entering the new calendar year.

One of my neighbors here in Cincinnati told me she owns 15 properties.

She says there are maybe 10 times per month when she is able to fill those properties.

That’s a lot of money tied up in something that’s generating returns just one-third of the time.

And that anecdote is a microcosm of the pain that’s to come for ABNB.

I mean, let’s be serious here. We’re barreling toward to a recession, and with inflation still sky high, purchasing power is down while the workforce thins. I dare say vacations won’t be the first priority for a lot of Americans in 2023.

On top of all that, there are even some murmurs that some states could be considering outright banning short-term rentals altogether – or, at the very least, steep tax rate hikes on those properties.

All of that is why I’m looking at June and July puts on ABNB. (Right alongside that six-month timeline.)

Just a heads up, I’m going to be putting together a full report soon on that trade, so be sure to keep your eyes peeled for that.

By the way, that ABNB play is just one of many that the fine folk over at Money Morning Live compiled from all of the resident experts – including one tech company that Tom Gentile and resident cutie pie Mark Sebastian believe is ripe to rebound.

Click here to find each expert’s top stock of 2023 to start your new year off on the inside track.