Day after day, the MEMEsters cease to amaze me with the drive, passion, and IGNORANCE they trade with. It has gotten to the point where I am doing daily MEME stock updates because the next big market event is going to be based around these traders deciding to stop chasing this dog around the yard.

This is really important to understand, If you are hopping on this train so be it, but riddle me this, how will you know when its time to get out of the way of the boulder rolling to crush your profits?

Let me walk you through it and maybe you’ll just walk away with enough insight to know when to step to the side. (Hint: BTC is going to be important to watch if you want to know when the ball drops on the MEME stocks) 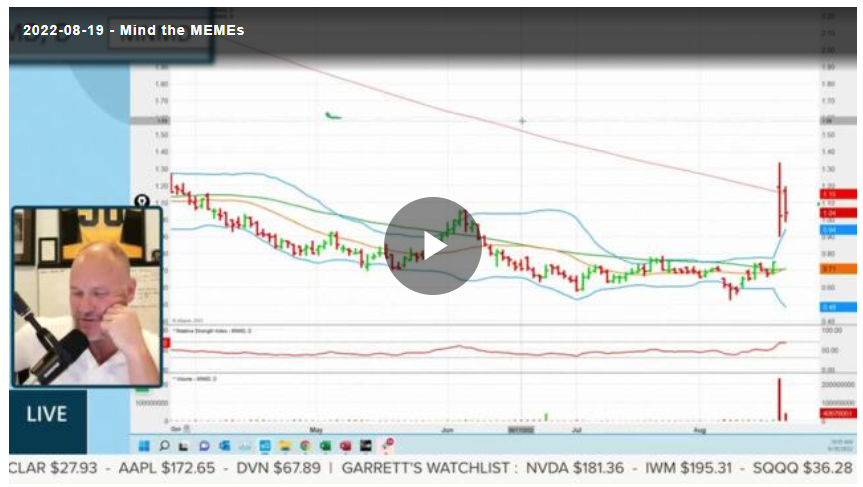 What’s the deal on trading into September?

To find and answer to this question I look at the Open Interest Configuration.

Put simply the Open Interest Configuration is a chart that shows the number of options contracts that are currently open at a particular strike.

Now there is a reason this is so important, it tells you where the market is expecting a specific security to go… as a technical trader you follow the money and as Mark does during his Inside Money Trader, make the better trade.

Now Mark is following the biggest individual trade, but looks at every stock, you can learn more about his technique here.

With the Open Interest Configuration we are looking where the most amount of money is going in a specific security and find the best trade based off where the stock price should get pinned.

Open interest is also different than volume, you see volume resets each day to zero. The Open Interest Builds as the expiration cycle goes on because more and more options contracts will be opened as they hit traders targets and risk tolerance levels.

So, if we look at the August open interest on QQQ for the last month or so the $330 level has been quite interesting. Why? Because it has been the peak open interest call strike where there has not really been any put interest to challenge it. 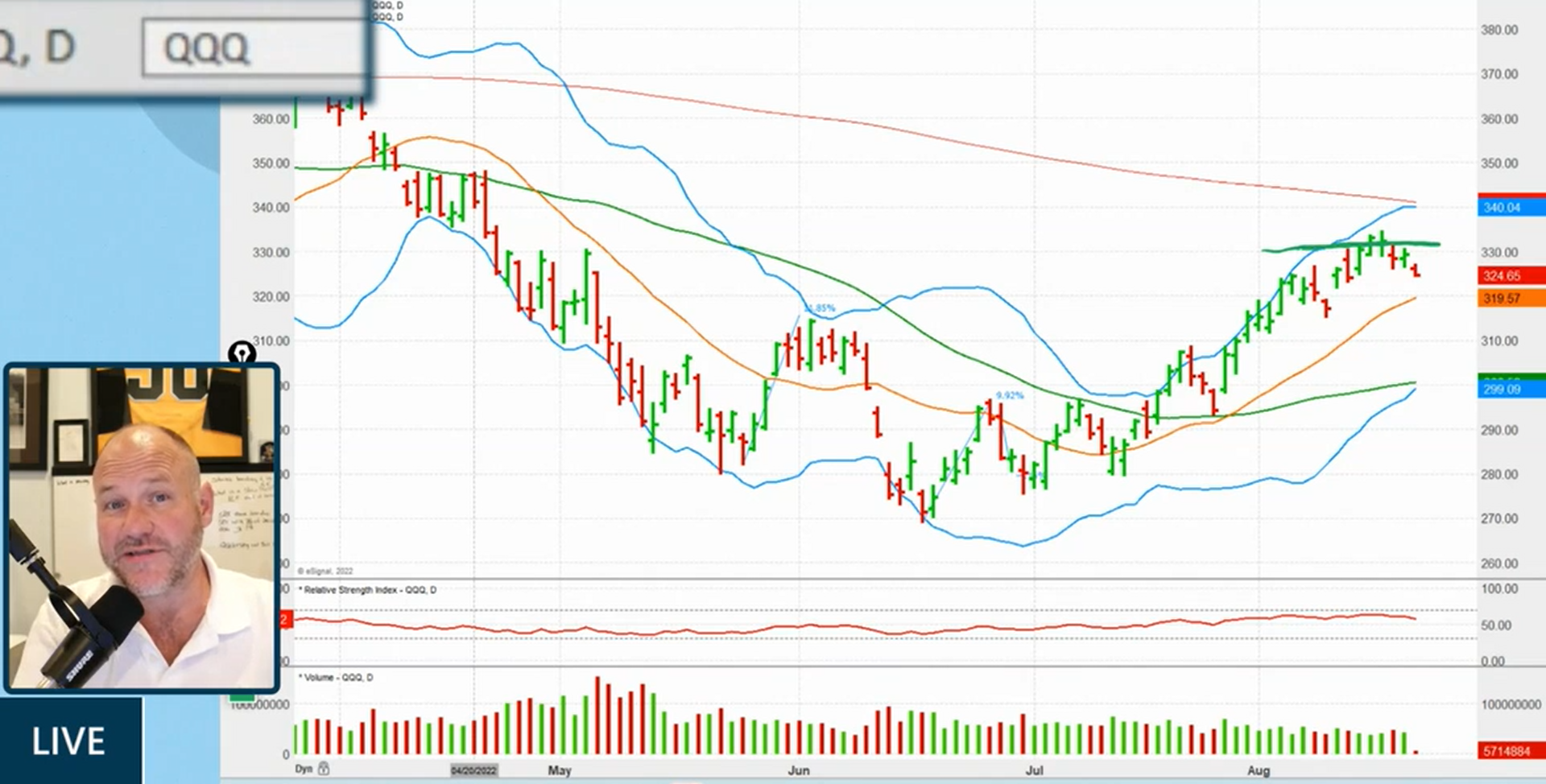 Notice QQQ rolled back over with no other indicators as a reason why when it hit $330. This is because the peak open interest call strike will act as a point of resistance in the market.

Even during an aggressive upward trend the market fails to win its game of Red Rover with this point of contention. 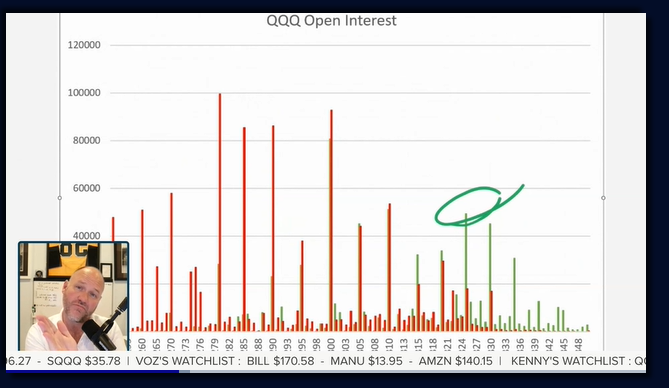 Now there is a bit of a problem with this chart, nothing really changes as we start to move past the August expiration and towards September. One thing that does change is the Peak open call interest is shifting from that $330 down to $225.

This tells us fewer people are thinking the market is going to go higher past that $330 mark. Remember the part trick I talked about where you can tell your friends QQQ is going to be at $300? This is the first step as $300 will start to have a sort of gravitational pull on the stock.

The reason for this is the call and put open interest are very similar and this is the middle ground for the market and likely where we will find a moment of equilibrium.

Anything else you Should be Watching for Next Month?

Of course! There is actually four things we need to be aware of as we move into next month.

Now I don’t want to keep you from your weekend so I’m going to just list them off and a few quick notes. As always, I will be here with you the entire time and ready to rock each day to help clear the fog and point you in the right direction.

When we look back in time we see that September and October are always months that bring volatility. 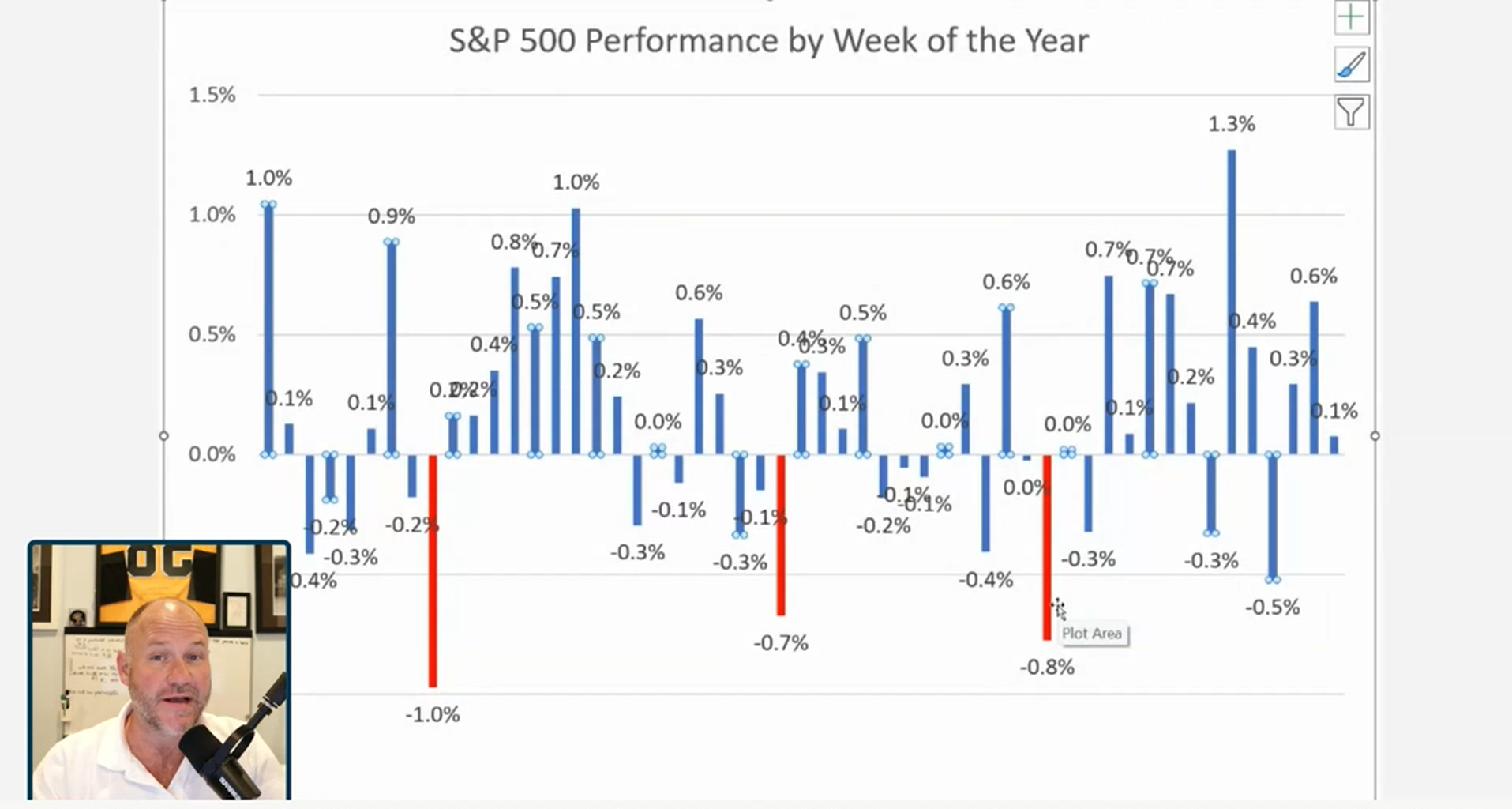 Of course we all dread week 9 in the market, it’s the worst of the year. The second worst? Week 39. That falls dead smack in the middle of September and it will be a doozy. We have a lot of events that happen to be centered on that week.

When they come out with a report that isn’t quite as bad as they led us to believe the market rewards – what is ultimately a bad earnings report – with a disconnected movement. It’s a sort of ‘I tried my best’ move from the companies that did it and just like when you did it with your parents and report card as a kid, there were celebrations that were unearned but none the less, still awarded.

If they are expecting the rates to go the other way there will be money flowing into the markets. Yet another disconnect but that too shall fall from its throne if the Fed stays aggressive.

These three letter words will are ether going to be a crowd favorite or turn into a four letter word that can get you in trouble in church.

Depending on what these numbers say it could DRASTICLY change the trajectory of the market as the Fed may have to really drop the hammer on the market if the number is not sitting pretty.

This will cause a shock in the market as everybody has but a week to scramble and reposition if they start to get cold feet.

Be with me on the day to day, even if you are not trading, I do my best to paint a clear picture of the market every single morning. Trading is all about understanding the information that you have and making a move based off that data.

If you are not taking every opportunity to collect pertinent information about the market conditions you are leaving money on the table. Remember ill be back Monday at 9:30 to tear this market apart bit by bit, be there or you might just lose an opportunity to bank some real profits from a hidden opportunity.