Microsoft and Google both released earnings yesterday. Brandon had the AUDACITY to open the show today by asking me how I felt about it…

I told him to get the standards and practices button ready or I would have to pay some fines. I was seeing red watching the market movement after the closing bell and worse yet, after MSFT earnings were announced.

But you know what….

We are used to this we are going to keep bending, don’t break just yet.

GOOGL & MSFT both reported earnings last night, what came next was the most outrageous, flagrant display of hope trading ive seen in a long time. In case you missed it here is a brief rundown.

MSFT closed at $251.90 per share. Leading up to earnings se saw the stock dip down after market hours to as low as $248 this made sense, what happened next, not so much. At 5:30 MSFT reported their earnings and MISSED by 2.70%. After their miss they released a more posotive outlook for next year and the hopium kicked in, we saw the stock jump higher at a rapid pace only to open at $261.02 per share.

GOOGL was similar as it closed at 105.02 per share. This time there was no dip leading into earnings rather the stock already started to climb. Maybe they knew something we didn’t? NOPE. GOOGL also missed earnings only by .16% but in my mind, a miss is a miss is a miss. The stock continued to rise only to open this morning at $109.40 per share.

Now, how are we able to trade a market that’s doing the opposite of what is expected? We get limber and touch our toes, bend don’t break. I have puts on MSFT right now and I’m sure youre thinking ‘oh boy CJ it’s going against you.’

Guess what? I DON’T CARE… It’s not that I don’t care that the stock is going against us but a trade being down isnt a loss quite yet. My puts go out all the way to September, I bought the time for the armatures to have their fun and get out of the way so I can have some fun go play some golf and relax knowing the market is coming to me.

What Is Mr. Powell Trying To Do Today?

I asked the chat today ‘was Jerome Powell’s objective today to make you feel better about the direction of the stock market?’

Overwhelmingly you all answered no. and youre right, it’s a bit more nuanced than that.

His job today was to make you feel better about the direction of the economy, more importantly employment, and the housing market. These are the things that are directly tied to the inflation that he is currently fighting against.

Here is how I see this playing out we just got a 75 basis point hike, but now there is a LONG period between now and the next official chance for them to do it again. Now I think they are a bit worried about the market and inflation right now. They are going to be chomping at the bit for the chance to wrangle this pony in.

I have a suspicion that the Fed might want to get a bit rowdy between now and then by implementing an intra-meeting change of rates. After all the longer they wait the more aggressive the move needs to be, inflation isnt going to just stop if this rate hike dosent solve the problem. Giving 2 full months for problems to accumulate will make them a bit antsy. If we see that I’ll be in love, my faith in the Fed would be restored. For now we will have to wait and see what they do in the coming weeks.

QQQ is starting to show a bit more tradability. We are starting to see a little flash of a bull market if you are in the disbelief mode but we know it’s not there yet. This is a combination of classic technical and classic psychology that’s leading us to the trades. 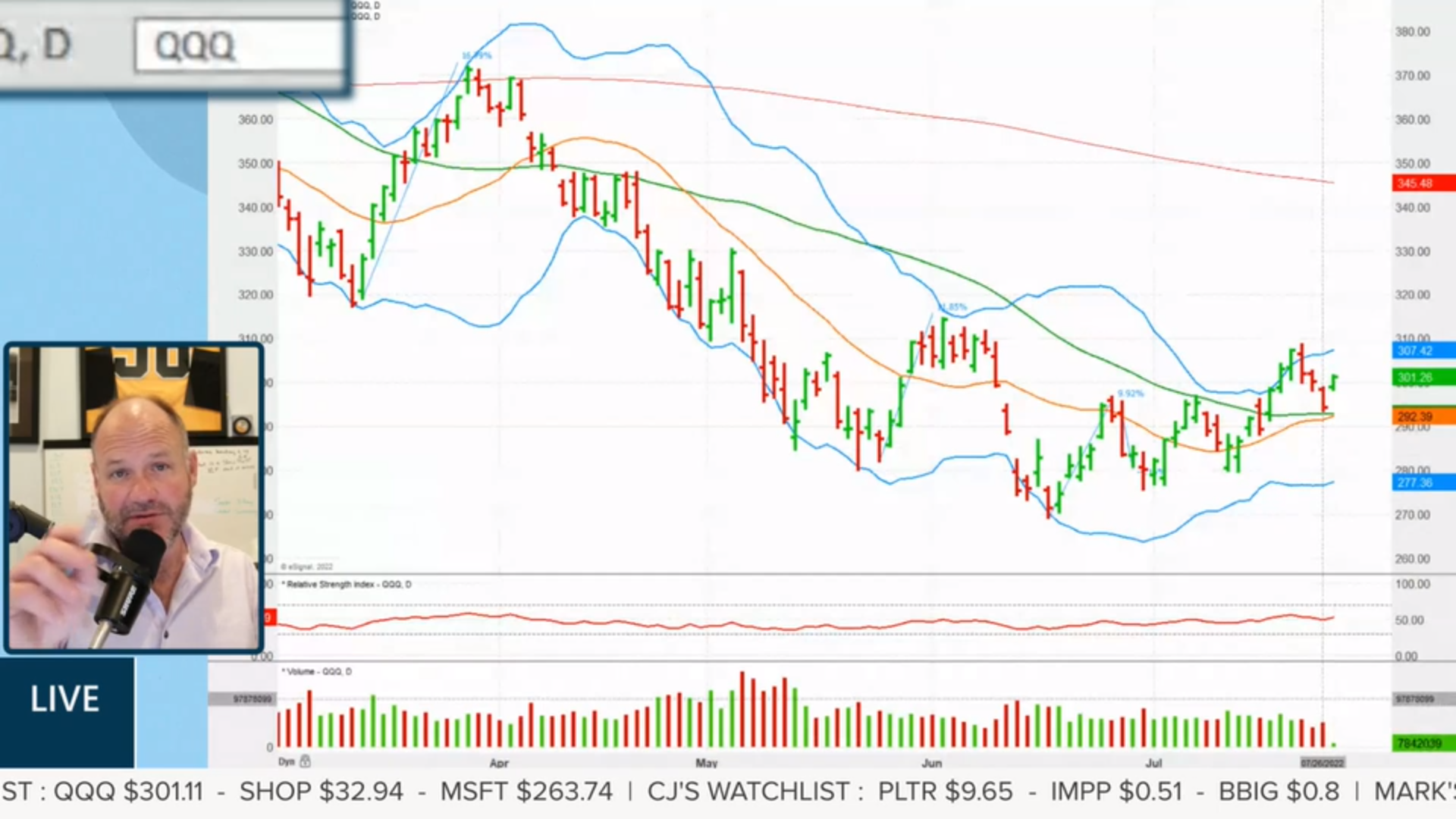 As you can see it bounced off the 50-day and made its way back up, it’s no wonder the market found a little strength into the close.

What are the risks on trading QQQ right now? If you are bearish, $310 with Apple and Amazon still out there ready to report and they are coming in hot.

If I was playing it and I absolutely had to trade Apple and Amazon id do a paired trade. Hedging my bets and strapping in for a bumpy ride. I’d do at the money calls on Apple and at the money Puts on Amazon. This trade would likely be very expensive, but, it’s how you can play the market right up the middle exactly how the market is going to see it.

ETFs were moving all over the place and it’s a sign of the confusion investors are running into right now. We are one day up and one day down. 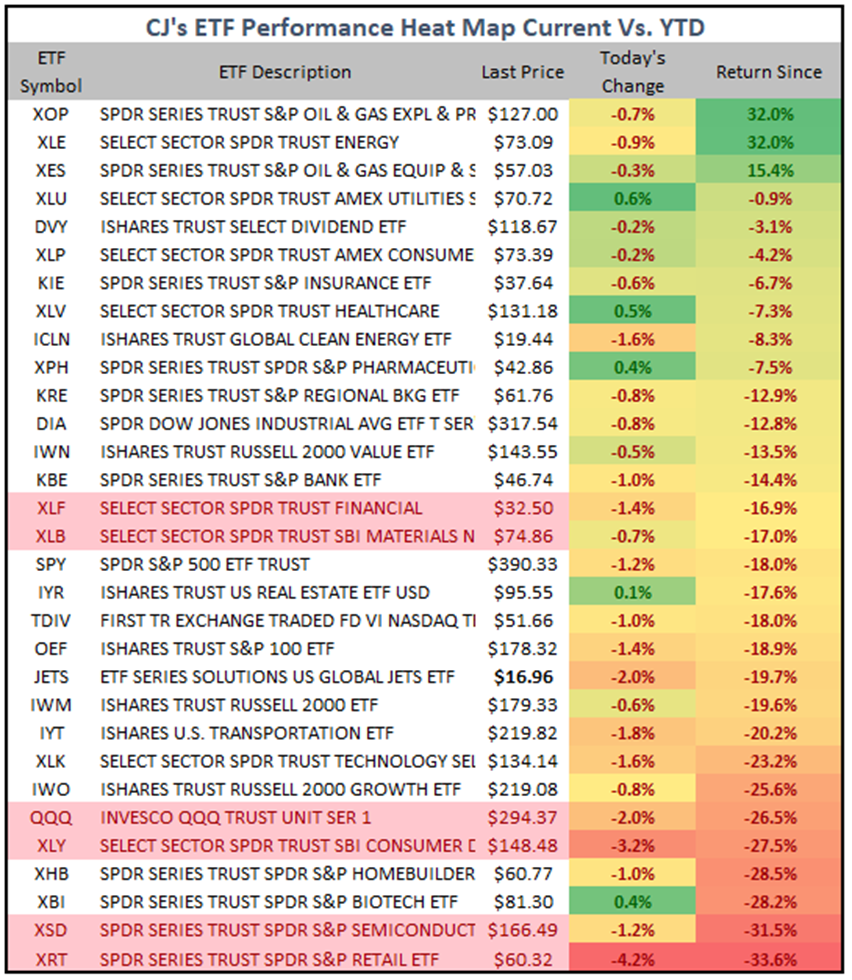 Energy is down 1% today as USO did a bit of a dance on its 20 day moving average. The Fed is the one giving you the roadmap on this one I am just reading it to you. They flat out said they hate high oil prices. Ride the wave he isnt telling us how to make money but the opportunity is there.

You have to rip into these trades by breaking them down to the subsector. Find the gas trade, the coal trade, alternatives like Natural Gas.

Once you have found the stocks in the subsectors it is as simple as using our method of reading the charts using the technical indicators I show you daily and you will be able to define the trade and make a profit.