In every kind of market, there’s always talk about “safe havens” and “flights to safety.” Gold, Treasury notes, cash – investors cling to them all at one point or another.

Think about it like this – when you’re on choppy waters and need to find a place to tie your boat, you look for a safe harbor. You’re looking for the place where you’re least likely to get rocked by what’s to come.

People had been treating energy stocks as safe harbor No. 1 – and for good reason, what with the price of oil and energy propped up.

I mean, just look at this chart of the Energy Select Sector SPDR Fund (XLE)… It was doing nothing but going up. 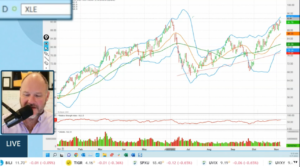 There is no volatility. That is what people look for in a safe harbor.

But here’s the thing. Now XLE’s starting to get a little bit wonky because USO, the United States Oil ETF – the true driver of energy – has been going haywire.

Whether it’s The Organization of the Petroleum Exporting Countries (OPEC) declaring a cutback on production (lowering supply), China announcing yesterday it would not be rolling back its zero-tolerance COVID policy as some had speculated (decreasing demand), or another headline, there’s been more noise around USO.

That causes more chop on the waters – making USO a less appealing spot to dock your ship.

So, in lieu of XLE – the market’s traditional safe harbor – it needed another place to go. 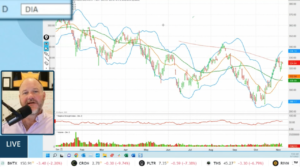 Well, up until last week, the DOW was on a four-week winning streak, outperforming every other index.

In the face of volatility elsewhere, it became the safe harbor, offering some nice little gains. It represents something everyone thinks they want to adhere to in a bear market – a value proposition.

It’s valued at less than what the rest of the market is.

So, we’ve had a nice run in the Dow. However, that could have been predicted by looking at the performances of the Invesco QQQ Trust Series 1 (QQQ) and SPDR S&P 500 ETF Trust (SPY), which had two-week rallies of their own alongside the Dow.

That’s because the Dow isn’t a market leader – it’s a follower. Historically, the QQQ and SPY are the leaders.

But the movement that carried the Dow higher is starting to reverse course. 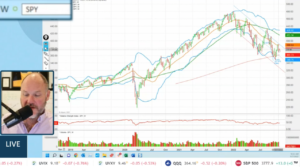 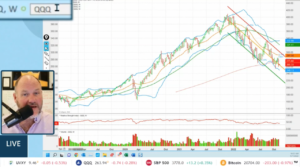 The true leaders of the market are now giving you the sense that things are getting a little crazy going into the midterm election.

Generally speaking, these market leaders tip the hand of the rest of the indices. Of course, that’s what made the DOW so appealing for that four-week spurt – it was going up while everything else was going down.

But that winning streak was snapped, and now we’re gearing up for more chop in the midst of the midterm elections.

You’re going to see some unreliable results coming out quickly tonight as everyone rushes to be first.

As we start getting turnout numbers from states like Arizona, Pennsylvania, and Georgia around the afternoon close, we’ll see speculators start to rush to action.

As you know, speculators do just that – speculate. There will be some uncertainty coming into the market…

In other words, I’m going to be an extremely patient trader over the next couple of weeks.

As you probably expected, I’m playing the long game on this. I’m going to be looking to roll November expiration options into December, maybe even paying up for less “space” and more “time.” I’ll maintain a healthy dose of my November exposure while adding a few calls.

In other words, I’m playing the role of a trading chameleon walking through the woods.

I’ll match the environment of election-based volatility while keeping eyes and movement toward the December expiration cycle. That way, I can blend in well with the trends and volatility (bullish or bearish) that will close out the year.

With the amount of volatility that comes with announcements of this size – midterm elections and Thursday’s CPI numbers – there aren’t any safe havens on the market.

The market always likes big events like these, because there’s usually clarity on the horizon. But it’s sort of tough to find clarity when there’s just been one thing after another this month, from earnings through to the CPI announcement.

That’s why it’s not going to be until after Thursday’s CPI announcement that we’ll be free and clear for a trade.

So, let’s say the CPI comes in cooler and we’ve got less inflation than expected. Then you’re going to see the Dow lose its appeal. Instead, the NASDAQ and the small-caps will take off.

Because if risk-on is back in play, the Dow – which had been operating as the relatively safe harbor – falls out of style.

So, if the CPI comes in lower than expected, you’re going to find everybody – including me – running to the other side of the market quickly, and it’s going to be in technology and the risk assets.

If the CPI comes in hotter, well, you might see more people flocking to the Dow looking to tie up their boats.

If I’m being honest, there has only been one CPI announcement that’s felt this impactful since I’ve been trading, and it was when I was an intern back at the start of my career.

There was this huge urgency in the air, and everyone was saying, oh, we’ve got to see this number.

Stick with me this week to find the sunshine on the other side of the storm.