The market is doing something that traders should hate seeing…. Boiling the Frog.

The volatility of stock prices is like boiling water – if you put the frog in boiling water, he jumps out – till the time the water temperature increased slowly, the frog was ok.

This is akin to the low volatility situation of the previous decade. The moment a frog was thrown into boiling water, it jumped. That was the month of March 2020.

The frog in this case could be equated with the human mind. Investors get scared of the wild price fluctuations, or the heightened volatility.

Due to this, they either run away from equity investing or borrow and buy stocks. In other words, the strong emotions of greed and fear take over and the investor starts to act irrationally.

Yesterday and Friday’s up-and-down intraday trading activity settled to a close on the low situation and that’s a little deceitful, especially when we’re still in a market that many would love to “buy the dip” on.

What Level to Look for on the VIX

We’ve watched the 28 level act like a glass ceiling of sorts over the last week.

The more we push, it keeps pushing back, but that level is going to start giving way and when it does it should be more than a subtle move.

It’s nothing special about the 28 mark, other than traders are starting to see it get rejected over the short-term which builds in a “self-fulfilling” perspective.

From there, it’s just a pitching wedge to 30 and from there… well you’ve seen this movie before.

Want to know how to get ready?

Here’s a hint for those of you that just want to put an intermediate-term hedge on the market, kind of like that SMH put

Daily scans of the market. 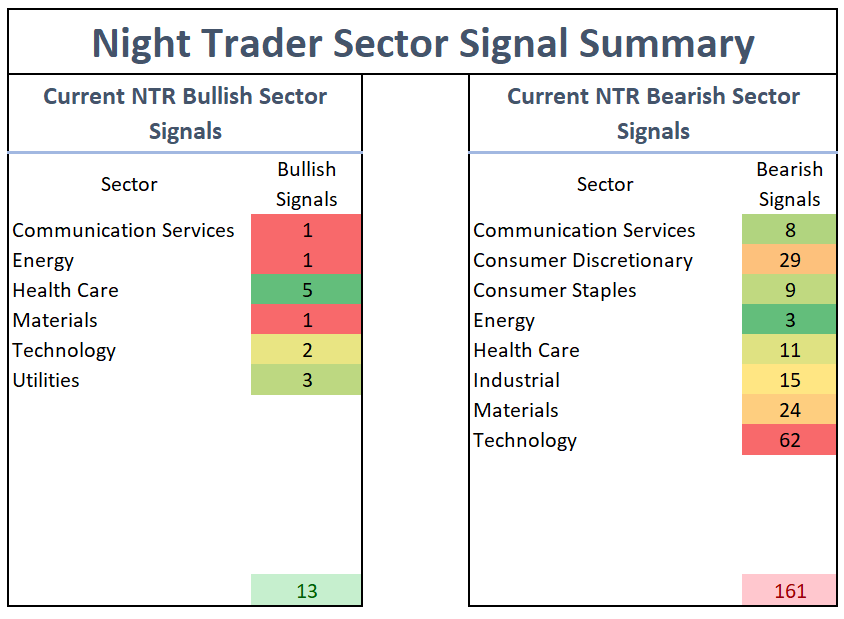 Interesting note, ETFs that focus on Europe are now seeing a HEAVY number of signals from my model which is telling you that something is really getting ready to boil over “across the pond”.

I’m adding some exposure to my ETF portfolio on that computer over my shoulder.

As always if you are not sure how to add this exposure to your portfolio as I am, just ask I’m always dropping hints for you in the main room each morning.

Of course if you can’t see past my jokes and commentary to find the trade you can always join my Night Traders as they are going to be chipping away at the market as we see this move take place and there will be profits every step of the way.

The Headline Giving Energy to the Market

Over the weekend, Russia admitted to weaponizing their natural gas shipments…

I know that’s a shocker, but that’s one of the reasons that we held on to our short positions in the crude oil market and stayed long on natural-gas-related positions.

Remember, this is a tactical game right now for Russia. As soon as they see any progress toward anything good – in this case, the EU acknowledging they’re storing gas faster than they expected – they’re going to flex their muscles again.

So, after this news came out, I decided to pull out the UNG vs. USO chart… 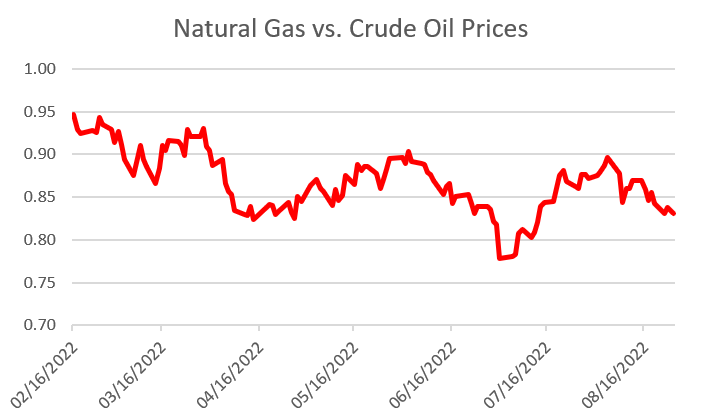 Over the last couple weeks, we’ve seen a little bit of strength in oil as it is going down.

Natural gas is first. That means, as natural gas gets stronger, it pushes higher. Every one of these situations – especially when we get above that 0.85 mark, and particularly in things fueled (no pun intended) by headlines – continue to start to give a little bit more pressure to UNG. 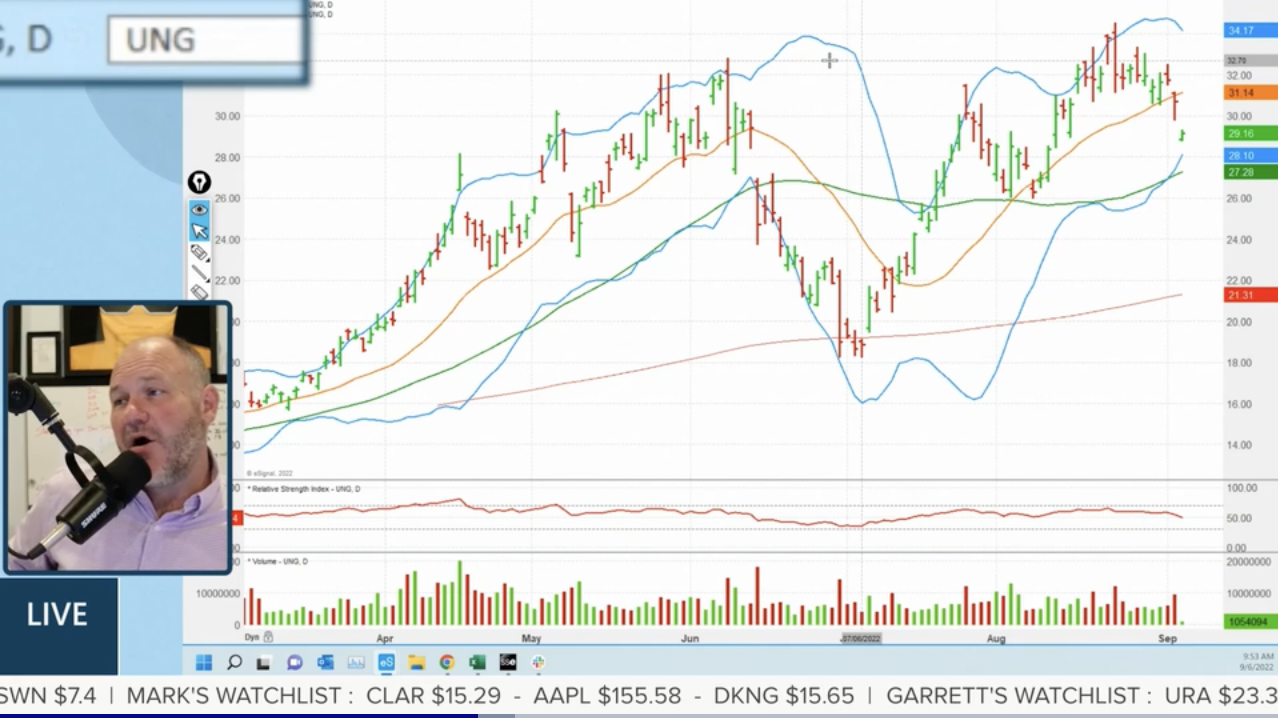 As you can see in the above chart, UNG shares themselves have been trying to hold on with the 20-day moving average. Well, they gave way following this weekend’s news.

Notice also that the Bollinger Bands (the blue lines) are extremely wide, telling you that the natural gas trade should see some volatility – and we’ve been trading very quietly for the past couple weeks, right up until that 20-day moment.

So, how should you trade it?

This still has the long-term potential to hit $32, but seeing as how it’s such a headline-driven trade, the Nord news over the weekend dampened the quick run to it.

That’s why we’re going to lengthen out a little longer than anticipated.

You hear me say it all the time: don’t trade the noise, trade the trend. There is still a trend in volatility.

BUT – I have to mention the small catch here. This trend is at risk.

Today, UNG is trading at its 50-day moving average – more or less the definition of “the trend.” A break below this, along with more selling, puts the trend at risk.

Given the fundamentals behind the natural gas situation in Europe, it’s more likely we’ll see UNG recover that trend. But it’s important to note that it is in danger. 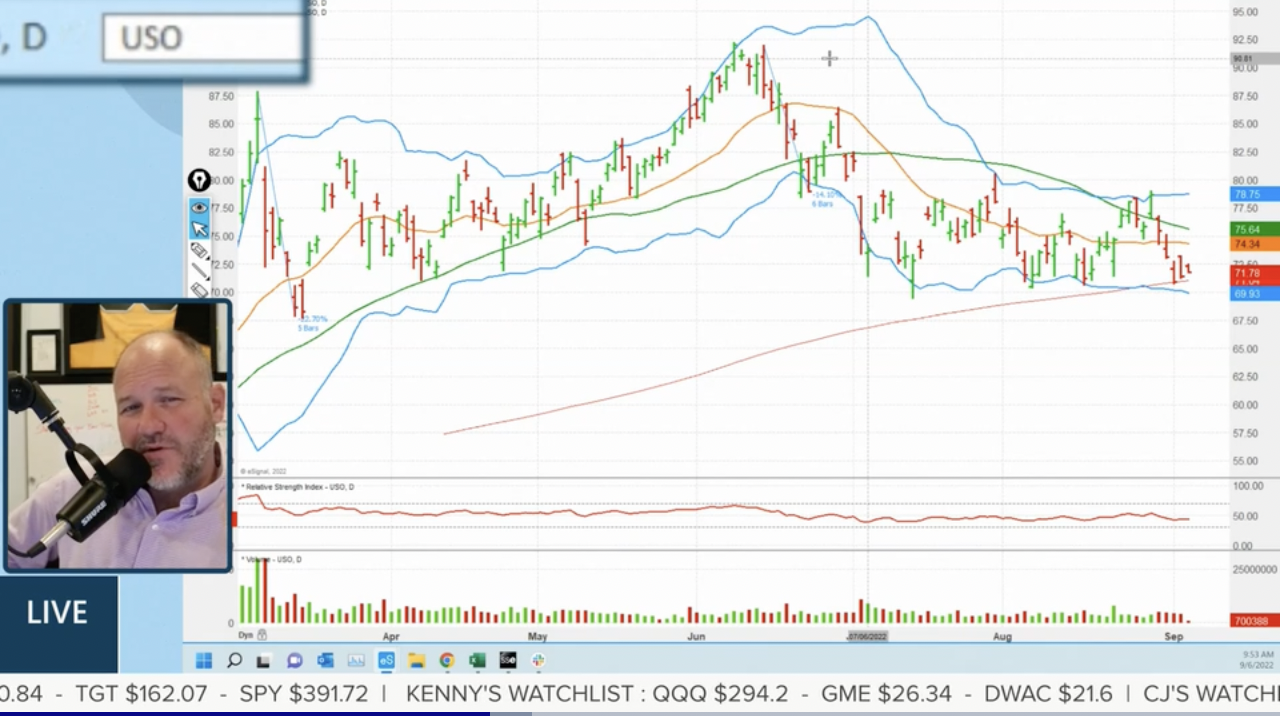 Remember, it’s a little more organized because we don’t have to worry about any of the rhetoric in the headlines.

USO is tapping on this 200-day moving average.

Folks. I have been trading both sides of this. Natural gas right now pulling a little harder on the portfolio than USO, but one of the things that we’re going to have to watch is this 200-day.

That is the trend that is going to continue to lead to some of the trades.

I’ll be watching UNG and USO closely the next few days because of these wrinkles, so be sure you’re not missing anything.

There could be some trades in these sectors that you won’t want to miss out on.

We will continue tracking this story and its effect on the market but enjoy the rest of your night.