Today, Mark and I went live this morning to give you the breakdown on energy!

We know for sure that July and August historically has not been favorable to the energy sector.

We had to realize that a micro view of the markets won’t always work, we have to look at the bigger picture!

No more chasing headlines, no more blind buys. The current market conditions and global climate lends its hand to traders that are willing to get a bit down and dirty.

How is the energy market repeating itself?

Back in 2008 we were all driving around taking care of business as usual and much like today we were paying a bit extra at the pump.

What did we have to worry about?

Well we had signs of a recession. There was a bit of inflation. Oil prices were going through the roof!

Back on May of 2008 Goldman Sachs expected what they call a “super-spike” that could lift oil to $200 a barrel die to poor growth in oil supplies. 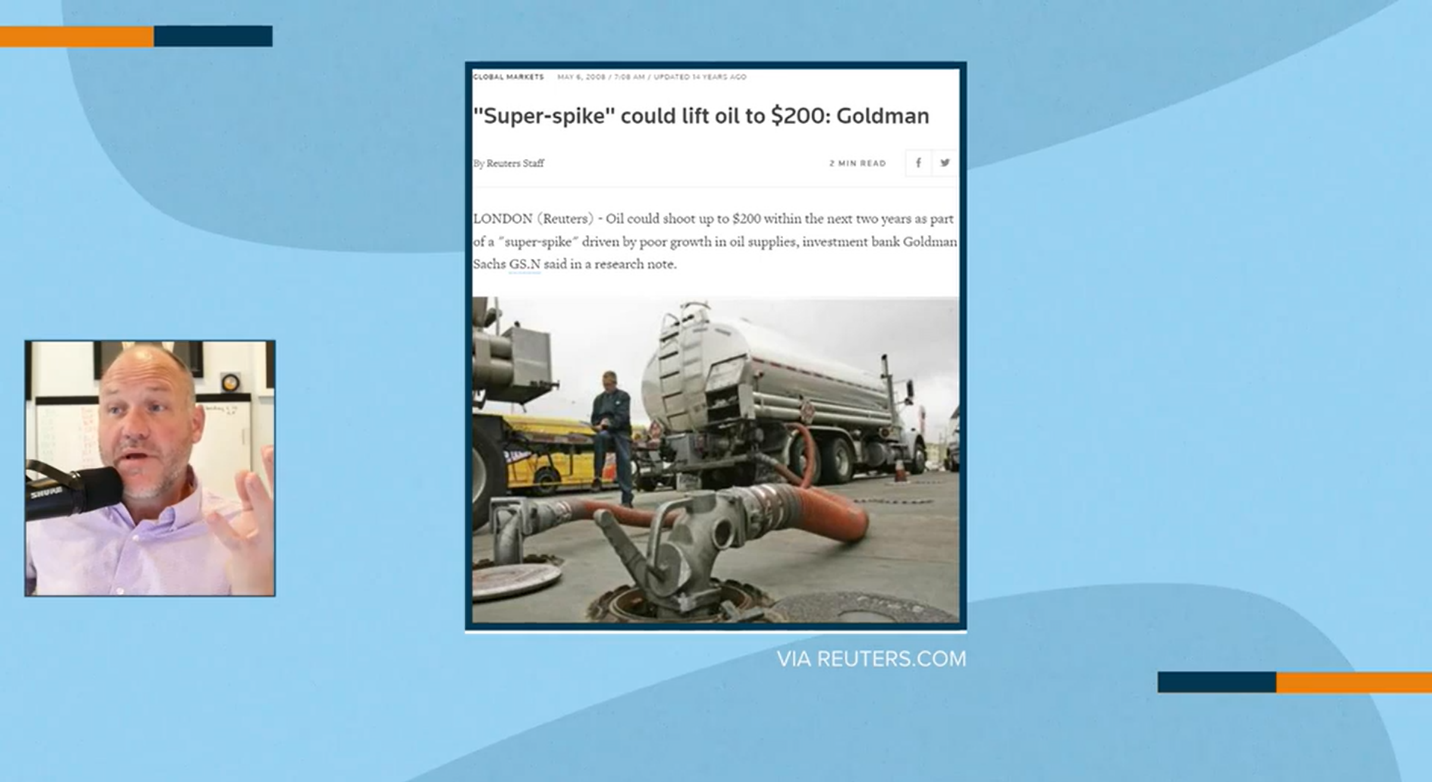 Analysts at the time were thinking we were not quite there but they were predicting the same outcome but for different reason. Their thoughts were the ‘super-spike’ in mention was going to be due to an increase in demand.

From my perspective as a man who likes to slow the markets down, I had to think to myself “hold on a minute, if we are heading into a recession, what is going to happen to demand in general”

Mark obviously hit the nail on the head when he said “oil demand falls, energy demand falls. This is because corporations are using less energy, people are driving less. Typically a recession will put a damper on inflation, and put a damper on energy usage”

Where is the energy market now?

Right now we are seeing a similar set up forming. Inflation is taking its run at our wallets. The Fed is doing what it can to control that.

Alas, as you saw if you were in the room this morning, most of us still think we are currently in a recession regardless of the stamp of approval for that statement from the Fed. Some of you were even so bold to take it a bit further and thing that the worst is yet to come.

We are also running into supply issues on a global scale due to the kerfuffle going on in Ukraine.

Mark explained to us that regardless of the general acceptance on the world stage to not buy oil from Russia, there is still oil being shipped out. Some of the bad actors choosing to continue to import Russian oil include names such as China, North Korea, and even India even though they are choosing to stay neutral as a whole they are continuing to but Russian oil because they can get it on a steep discount.

If you were a neutral country such as India I can’t really blame you for continuing to buy oil from Russia.

Think about it would you rather pay $100 a barrel from WTI or buy Russian oil at $75, it dosent seem like a hard choice to me.

Now the analysts have of course started to increase their call on oil but they can go out and do whatever they want. For us we are not necessarily trading crude oil, we are more focused on the companies themselves. Who can get the oil out of the ground, down the pipeline, and into the tanks of the people.

We don’t really watch the headlines too much but one thing everybody was doing was nailing a top to the oil prices back in 2008 while the Fed was fiddling with rates. That wasent a good call then, and to be honest it’s not a very good call right now.

Now if we don’t see a deep recession, things end up playing out in Europe and the market makes a recovery I don’t see oil going back to its 2009 price of below $40 a barrel.

We could still see some softening of our pain at the price. This time a year ago oil was lower than where we are today WTI was still in the $60s for goodness sakes. Even if oil comes down to $85 a barrel from where it is now a lot of the big oil companies are going to be making money hand over fist.

Right now the heaviest hand on the energy sector pushing it back into place is the Fed. They have made it clear they are looking to really kick things into gear with trying to control inflation, taking interest rates higher than inflation would be an aggressive move on their part. When we start seeing more of these rate hikes what do you think is going to happen here with oil?

History repeats itself, just like in ’70s and early ’80s oil will start to crumble along the way as the economy attempts to recover. This is the reason ive been short on oil, everyone is starting to tighten the reigns supply has started to drop thanks to the supply chain issues and global economy, recession murmurs have folks concerned and history always repeats itself. It’s like we have a Lego set that came pre-assembled we get to enjoy the end product of making money in the markets without having to use that stupid picture only instruction book to struggle to put the pieces together and hope we did it right.

Where is energy going and how are we going to trade it.

One thing that I had to take a side bar for this morning is crowded trades. Energy has turned into an amazon, apple, google, or tesla. In 2021 we all wanted to be the ones buying the big names of tech and since the beginning of 2022 energy stocks have taken their place.

That is all well and good but, the way this has been implemented by inexperienced investors and emotional traders is what is going to be the downfall of the sector.

You know my thoughts on the buy the dippers. My thoughts aside, people are going to keep that trading style for as long as their bank accounts will allow them it seems. Every dip we see in an energy stock we see people buying thinking it’s the floor, you know better than they do, right?

Now when we get these crowded trades you know as well as I do the people who are on the train first make the most money. They are trading in and out and will ride that trend right to the bank but when we start to see people getting off the train everybody starts to get nervous thinking they missed their stop.

That’s where we are right now.

There are going to be bullish opportunities along the way but we are not at our lowest of lows quite yet.

Let’s take a look at CVX right now so I can give you an example of what is happening. 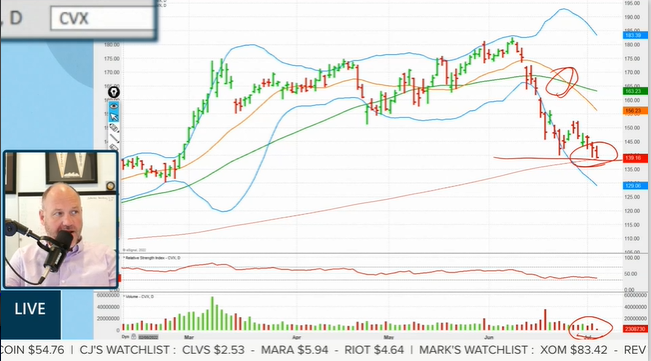 Now get our technical tool box here because this is a job that will require some effort but here we go.

First, we saw a bit of a touch and go at the end of May leading into June that had the market starting a mini-rally and pushing it to a new high for the year.

Next, we see that rally meet some resistance against its top Bollinger band three separate times and you know what they say in baseball 3 strikes you’re out, CVX starts its nose dive.

Then we had a flesh wound cross (otherwise known as a death wound cross for anybody who wants to be boring) driving the stock even lower.

It found a bit of support against the bottom Bollinger band but quickly turned back to the downside reaching its 200-day moving average.

We would expect to see additional support at this point turning the stock around but as you can see there is a level of volatility that’s negligible at best. Because we like to slow the markets down we are already in august expirations so I start to look at put open interest for August and there is none…

There is nothing that is going to catch this stock and I would expect to see the same for the markets over the next few weeks as seasonality continues to push this sector around and people continue to be bullish on energy.

Now I know there is a lot to see here and sometimes one set of eyes isnt enough. That’s why I’m going to be aggressively trading the energy sector with my ‘slow it down’ style using the technical and historical data to reel this market in with my Night Traders. We are going to have a summer side portfolio to track all of the energy trades and a guest on each week to talk about how we should be finessing the energy markets in times of uncertainty. If you havent Gotten the chance to check it NOW IS THE TIME, call Gabe first thing tomorrow (877) 212-9163. The longer you wait the more you’ll see energy drop and I know the opportunity is one that will have you full of regret

Also if you missed this morning’s live session check out the replay so you can be all caught up.