If you are part of my Penny Nation crew, we started off this morning with an order to close Uranium Energy Corp. (UEC).

We initially entered the April 14, 2022, $4.50 call because the stock appeared in my Top Stocks under $10 Most Active Options Watchlist on March 7.

It really grabbed my attention because we saw so many people putting money on the table.

One day, there was a pop in the call volume followed by an uptick in puts the next day and finally another positive move on the call side as we took our position.

That told me that this stock was on fire – in a good way – and all the energy-related headlines last week felt like the icing on the cake.

We’re trading UEC the same way we did with our winning trade in WEAT earlier this week.

Sell the rip and then wait to buy back in on the dip.

But for now, the stock looks like it may run into some profit-taking at $5 – so we’re aiming to close for roughly an 85% gain. 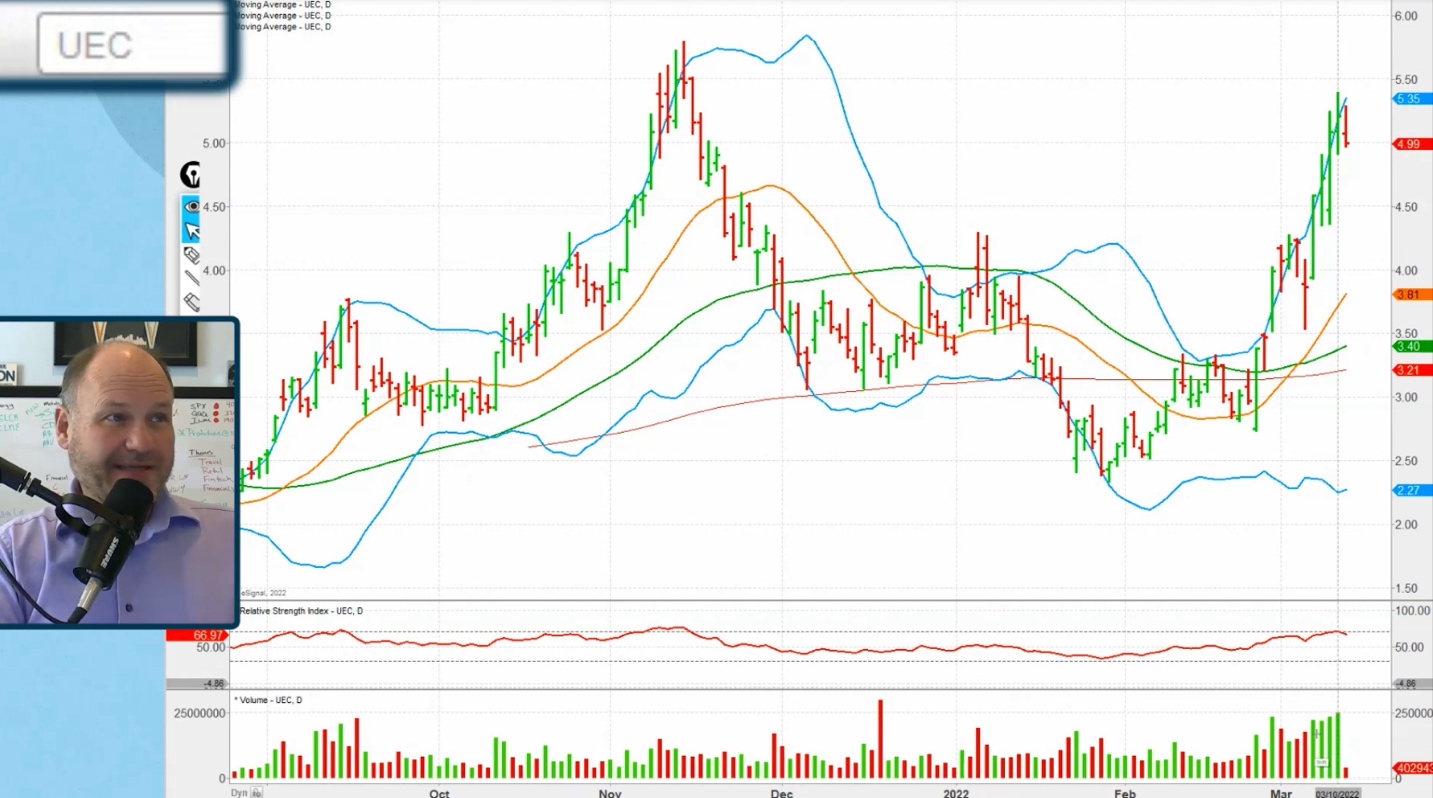 Given the stock’s status as what I have been calling a “Periodic Table Trade,” we’re likely to see another opportunity for a bullish play on UEC.

There are plenty of other stocks going through the roof right now, especially in the energy sector.

As it turns out, I used to play hockey right next door to their facility here in Ohio, so I know this company very well.

The action, which I posted this morning during our live session, is as follows…

Some of you in the comments were concerned that this trade doesn’t expire until July.

It looks at longer term moving average movements and the potential for positions to turn to the upside.

And in the interest of finding reasonably priced positions, sometimes I have to look for contracts expiring a little farther out.

But if you want to take this MPC trade down to April instead of July, you certainly can do that too…

I wouldn’t be surprised if going your own way there turned out well for you.

That said, just because I open a position that expires in July doesn’t mean I plan on holding it that long.

Oftentimes, my trades close in a matter of days or weeks instead of months.

But with the headlines going the way they have been, you may want to have that extra time built in.

This market may get a little bloody over the next few weeks.

The precipitous drop in the SPY is about to form a death cross.

What does that mean? Essentially, that’s when the shorter-term moving average crosses below the longer-term one… 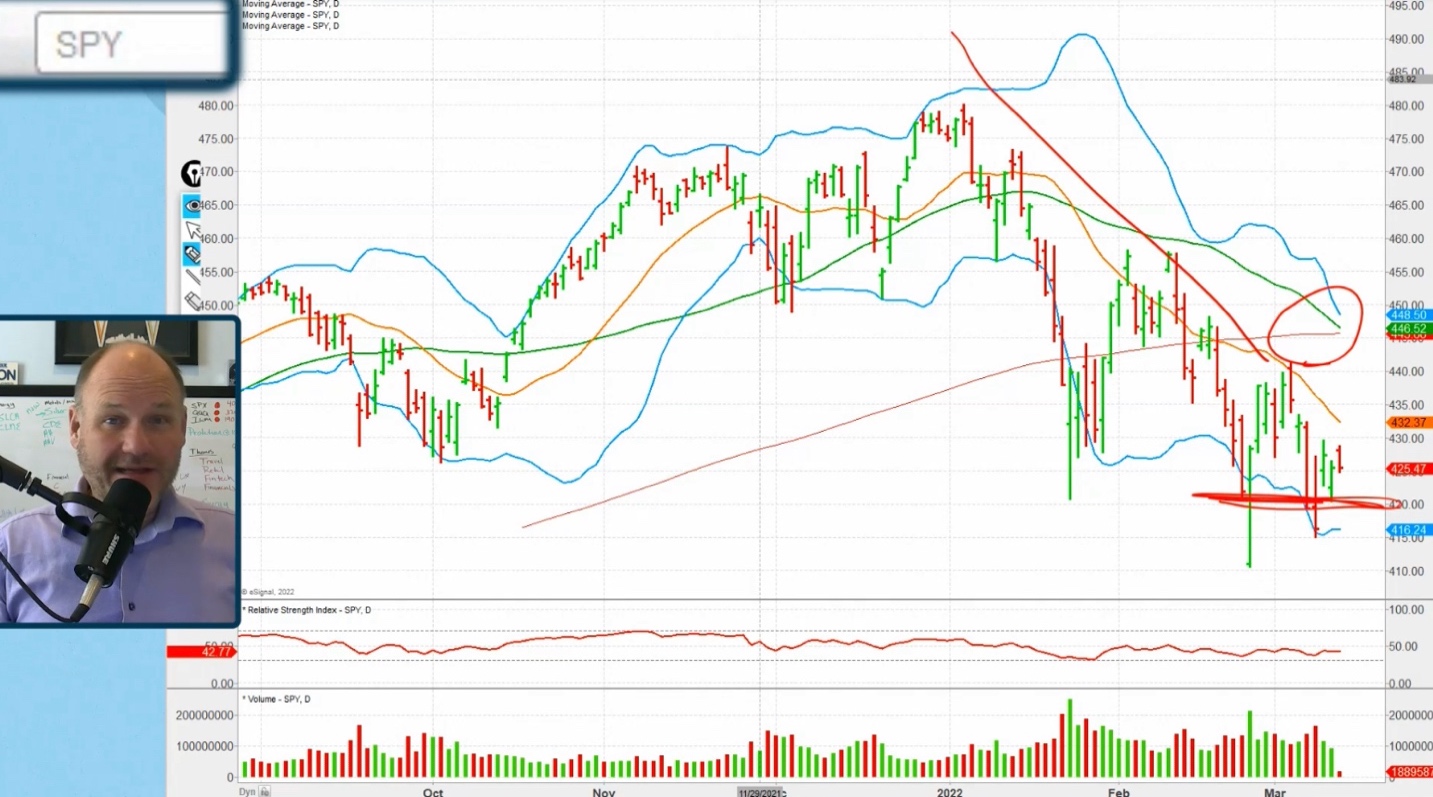 In this case, the 50-day is crossing below the 200-day moving average, often signaling a massive sell-off.

Typically, you’ll see a lot of consolidation after this happens around specific stocks in particular industries.

That’s why looking at it from a top-down view helps us identify trades.

The macro level isn’t looking too good for the market as a whole.

And that’s a good place to start investigating some bearish plays.

On the “10-point CJ Scale,” the highest technology stocks were rated at a 3.

And one that I really pointed out as being overloved was NVDA.

There are STILL so many recommendations out there to buy this stock despite what the “technicals” are telling us.

You’re going to need to stay tuned for more on that stock and others in the industry.

I have a feeling we’re going to be covering quite a few technology stocks under $10 next week.

Looking forward to our next live trading session,

P.S. Something else you may want to check out is my conversation about Bollinger Bands. This short video explains exactly how I use them on a daily basis when I’m on the hunt for new trading opportunities. Click below to view the full video. 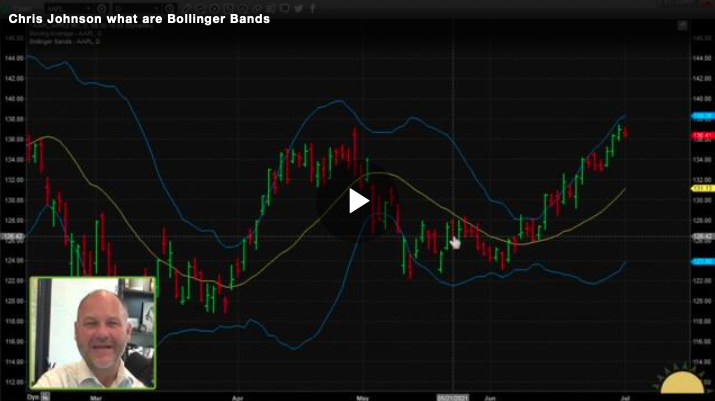