You know just as well as I do that avoiding the headline risk in your trades is extremely important, especially right now.

Avoiding the headlines does NOT mean to ignore them… we have to be watching them, understanding the implications of the news, and be aware of our surroundings. External forces are what drives a lot of the retail investors trading and even some of the analyst’s decisions.

Let’s take a look at the top headlines real quick so I can show you what you should be expecting in the market so you can trade accordingly. 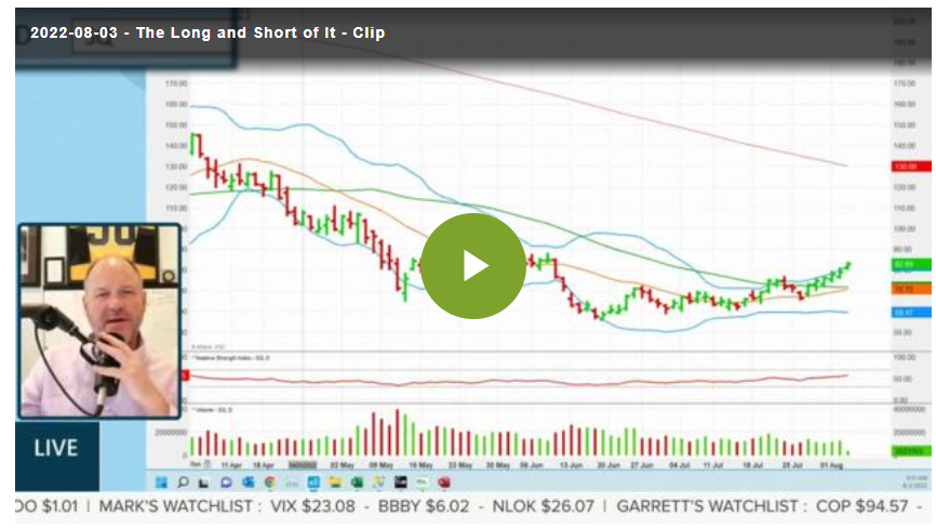 The Bigger Picture of Volatility

Forget about the VIX, it’s not portraying the volatility that we’re seeing on a stock-by-stock basis… and it’s not supposed to. No, instead, watching the daily break of Bollinger Bands is doing a better job of picking up where the real action is.

I really don’t want to harp on this but it’s a real concern in the market right now. After we had that huge day of Bollinger Band breaks the market went into a feeding frenzy.

The fact of the matter is it turned into a pretty substantial FOMO rally, people are seeing the price going up and more and more people jump in. it’s been quite he vicious cycle in my opinion. The rally brought volume, volume brings volatility, volatility fuels price movement. Just remember all of the buyers will eventually sell to take their profits and you should expect the same aggression on the downward movement as we saw on the way up.

That one single day has resulted in a continuation of Bollinger Band breaks that in some cases were worth buying and in other cases they have resulted in a massive fake out.

Now I’m going to dig into a few examples here but before I do, you know I have to break out my Bollinger Band teaching hat and take you to school…

If you don’t know already a Bollinger Band measures volatility of an individual stock over a specific period of time (21 days in my case). That means it looks at price activity over the last three weeks, takes the average price movement and standard deviation of those prices then you have a bunch of math stuff that happens which you really done need to fully understand if I’m being honest and you come up with Bollinger Bands.

This cool little indicator should give you a reasonable expectation for price distribution. Now, unless there is some extraordinary external forces, stocks are assumed to follow the rules of math. Specifically normal distribution rules, when they break these rules one of two things WILL happen…

Ether the stock will continue to break those rules and we will see even more volatility in that direction, OR, we will just see a volatility moment. This is just a flash in the pan, everything after that will start to regress and return to normal distribution.

The Key is to pick up on what is going on with the volume. That will give you an idea of whether or not that Bollinger Band break is going to give you an opportunity for the stock to rage higher and ride the rail or if it’s going to fall off quicker than it took off and come back to its norm.

A Familiar Pattern to Prove My Point

This is one of those fin-tech companies that I already told you I just don’t like. We are also seeing analysts taking their ratings down on SOFI. 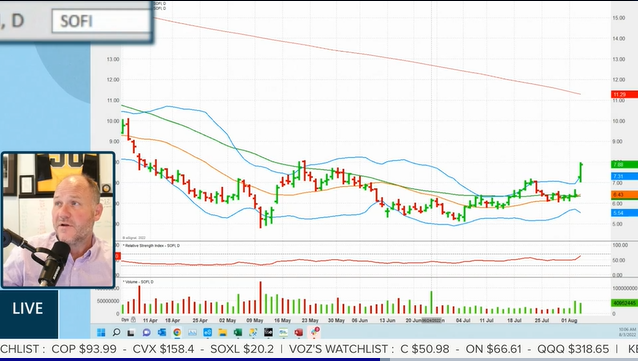 This company does NOT have a strong buy recommendation right now but this is a sexy break of the top band. Now it can still come back and test that $7.30 price but the important thing to watch is hiding down in the bottom right… we are seeing volume coming in along with this move.

So many times when you see these breaks there is no volume and you can see back in may it broke but the volume was decreasing. The stock followed suit and came back into range. Over the next few days watch the volume on SOFI even into the close today, if we match or break the volume we saw yesterday this will turn into a stock that will start making a run to a $9 price target.

There is a caveat on the Bollinger bands, if a stock is down a good bit YTD it’s in the basement. People will be looking for a reason to pick it back up. This makes the resistance from a Bollinger Band a bit less effective.

Yesterday this stock broke above the top band as you can see here. 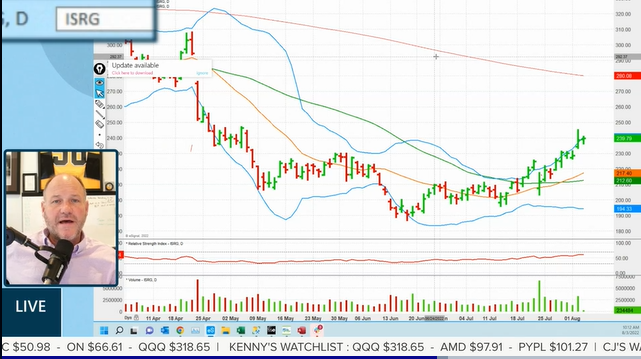 The only thing that kept this thing moving yesterday was a filing with the SEC for an accelerated stock buyback program. It wasent part of the news or earnings. Why don’t I like this you might ask? Well the bands are wider then they would be normally and they too will have to return to normalcy, along with that the stock will follow suit.

The moral of the Bollinger Band story, the market’s risk appetite has expanded but you’ve got to look at these and other volatility stocks with a strategic eye.

Keep a close eye out on your trades for these opportunity’s and as always will be pointing them out for you but until then have a great night.