I want to bring an important distinction to your attention…

The difference between “stopwatch” and “calendar” traders.

Don’t get me wrong, day trading – which is living by the stopwatch – can be plenty profitable. But there are regular markets and there are bear markets.

The stopwatch is only good for so long, and the technicals – in this case, our guiding calendar – are going to be the last thing standing at the end of the day.

For what it’s worth, there are some signals in the QQQ and SPY indexes that tell me we’re nearing a breaking point.

I let the market come to me. And sometimes that takes longer than I want.

But this bear market is about to walk right into my calendar traps. The stopwatch is going to actively work against you.

So, we’ve been in a holding pattern for the last week or so, as I have been waiting for a couple of key things to drop before taking a stance.

Well, today’s the day we can start to emerge from that haze now that we’ve had the Fed meeting and the retail earnings are out.

That said, there was still some wacky business going on with that Fed meeting that I’m going to address.

Generally speaking, in trading, two days of the movement in a given direction is a line – three days is when we can start to call something a trend.

So then why the heck did I see this headline… 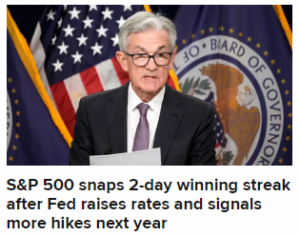 Two-day winning streak my *** (sorry, Brandon). That’s like me saying, “Oh, if the Steelers win against Carolina Sunday, that’s a one-game winning streak.”

In case you missed it, that was from Jerome Powell’s appearance on CNBC yesterday.

But, to be fair, the SPY has been operating pretty much exclusively off of the stopwatch recently. I mean, look at this…

I drew a line through at $397, and you can see how it’s just settled around that point after each day. That’s the type of thing that fuels stopwatch traders.

But the bad news for those folks is the stopwatch is about to stop being useful.

Well, the calendar is going to start playing out here, and I see no better evidence of that than the QQQ… 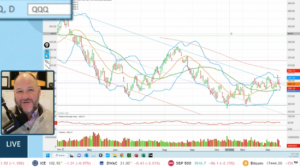 Similar to the SPY, it has been sitting in the same price range for just about a month now. Just going sideways between $280 and $290.

They’re both sort of dancing on a trap door.

Well, guess what. Judgment day is coming tomorrow. That’s when a ton of derivatives are set to expire.

These derivatives have been sitting out there forever, and once they’re gone, it’s going to free the market from the binds of hedges against swings.

Ironically, we have a time period from earlier this year that more or less sets the stage for all that’s coming.

I have to give credit where credit’s due because I wouldn’t have noticed this if not for our pal John Doh! In the Night Trader chat yesterday.

So, that’s exactly what I did. And I’ve gotta tell you, Mr. Doh! was on to something. 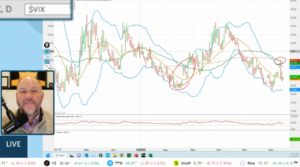 August 19 through 26 was a five-day trading period. It popped up and touched the 50-day moving average (MA50), and there was a little bit of retesting with the MA200 in play.

Well, I threw that into my correlation database and put it on a five-day setting instead of my usual 60-day setting, and that span showed a 78% correlation to the move that we see happening right now.

And would you look at that – we’re right back below our MA200.

Ultimately, a 78% correlation is pretty strong for something as scattered as the VIX. The average correlation for this is 0%, to give you a little more of an idea of how strong this was.

The VIX activity is going to be key to watch today and tomorrow. The fact that we’re hovering around 20 right now confirms that we’re in a fearful state – but if we do see that 25 level taken out here, I’m going to start looking a whole lot closer at that correlation John pointed out.

You heard me talk about stopwatches vs. calendars, well, the VIX is particularly interesting in that regard.

It’s always looking at the calendar, since it looks at the options over the next 30 days and what the market’s pricing in. So if the VIX does start to move a little higher and the trend breaks down below that MA50, that’s telling you that more volatility’s coming, and now it’s directional volatility – not just side to side.

So, the reason the VIX is calm today has nothing to do with the fact that the market’s up or down 3%, it’s because the next 30 days aren’t moving the needle.

The people looking at their stopwatches see this as a thing where they’re like, “This market is tearing it up – we’re missing opportunities.” No, no, no. If you lengthen your timeframe, you’ll see that this trend is still developing to the downside. That’s why you need to ditch the stopwatch for the calendar.

Look, I get it. We’ve gone through all of the past month-plus looking at our stopwatches, because it’s been one major event after another, starting in November with the midterm elections all the way through yesterday’s Fed meeting and today’s earnings.

Everyone’s gotten used to day trading. You needn’t look any further than that “two-day winning streak” crock of a headline. Even the Fed recalibrated its thinking – winning streaks used to have to last five, 10, or 15 days before deserving mention.

The fact that the Fed thinks that’s news speaks to a paradigm shift for investors. A shift toward stopwatches and away from calendars.

I mean, heck, investor polls are now obsolete because those things move at the speed of a calendar – and a slow one, at that.

Well, guess what, we don’t hear from Jerome Powell at a Fed decision meeting until February. Sure, the market will focus on the CPI number for a little while when it gets released, but it’s going to be drastically different from the past month or so when we couldn’t come up for air.

Now, the stopwatches can be put in the desk drawer and we can start actually making moves based on technicals and logic.

Imagine that, actually trading based on the reality of the market. So, we start looking out a little more and asking what the market’s telling us in terms of trends.

And that’s my specialty. My motto is let the market come to me, and that’s been really hard to do in such a breakneck, event-fueled environment. The market couldn’t even get from one day to the next without shockwaves.

But now that the dust is beginning to settle, I can really hone in on the parts that are on the verge of movement.

We’ve already seen today with some retail earnings announcements the signs of distress in that sector. The banks and financials have been sending out warning signs of a rough start to 2023 in the form of bonus cuts and potential layoffs.

But their rough start to 2023 will be a lucrative one for us. You just have to be patient and ignore the stopwatch.