Unfortunately, I won’t be able to join you live this morning.

But don’t worry, because my colleague, Mark Sebastian, will be hosting the 10:30AM slot today.

He’s subbing in for me while I’m out.

I told him to expect my Penny Hawks, so he better have something extra special.

If you feel like making some money this Friday morning, please head over to the live broadcast and catch Mark while he’s on air.

Click here to join Mark Sebastian when he goes live.

As technical traders, we look for strong trends that have repeated themselves over and over again – that’s what has put every stock on the Breakout Watchlist.

And that’s exactly what today’s Penny Hawk highlight is.

We’re going to be moving into Regen BioPharma Inc (OTCMKTS: RGBP). Shares are currently trading at $0.02, which means if the price moves up two pennies, we’ll make a 100% return on investment.

Sheer profit potential aside, the main reason why I’m recommending RGBP is because of how technically sound this trade is.

Take a look for yourself…

RGBP shares are one of the few stocks today giving a bullish trigger signal.

The stock is sitting at its “double top” of $0.03, which was established a little more than a week ago.

This is purely a technical trade as the chart is signalling a short-term breakout, and biotechnology stocks tend to extend themselves quickly before a fast retracement.

Not to mention, volume on RGBP shares is seeing a slight rise above its average over the last three days, indicating a building interest in the shares. 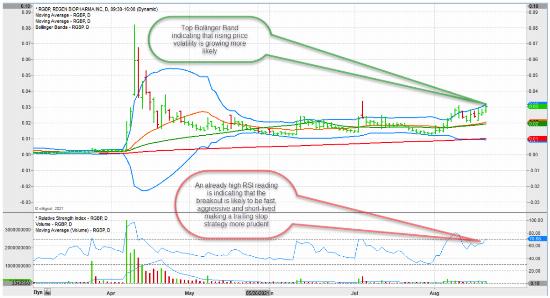 Click To Enlarge
At the same time, the RSI for RGBP is indicating that the overhead room for movement is somewhat constrained, meaning that a rally will likely exhaust itself quickly.

Support for the stock comes at the $0.02 level, which iis where we’re setting our limit price for a short-term bullish trade.

A “trailing stop” is simply a percentage-based stop-loss.

In this case, instead of exiting at $0.04… we set a trailing stop of 10%… this way we can chase bigger profits.

Yesterday, I mentioned what the People’s Shark, Daymond John, is currently looking at.

This company is flipping a $15 billion industry on its head with superior, modern technology.

What’s more, this corner of the market is expected to increase by $6 billion in the next four years… and this company is positioned to get the bulk of this excess cash.

But the best part is that this company is a great trade for us Penny Hawks as well.

I reached out to Daymond John and told him that you might be interested in this new company and he’s agreed to prepare a special presentation to brief you on this opportunity.