Despite the low volume trading and the lowered signal count, I can give you another view of my bull/bear model results that I don’t share too often.

It’s the next layer to my trading…

This tells us the stocks that are trading in the bullish and bearish ranges, not just the “signals”

It matters because you and I are looking out into the next few weeks to a month to pick our spots in terms of positioning and this view tells you exactly where the weaker points in the market are so that you can either avoid or position yourself to take advantage of the coming volatility. 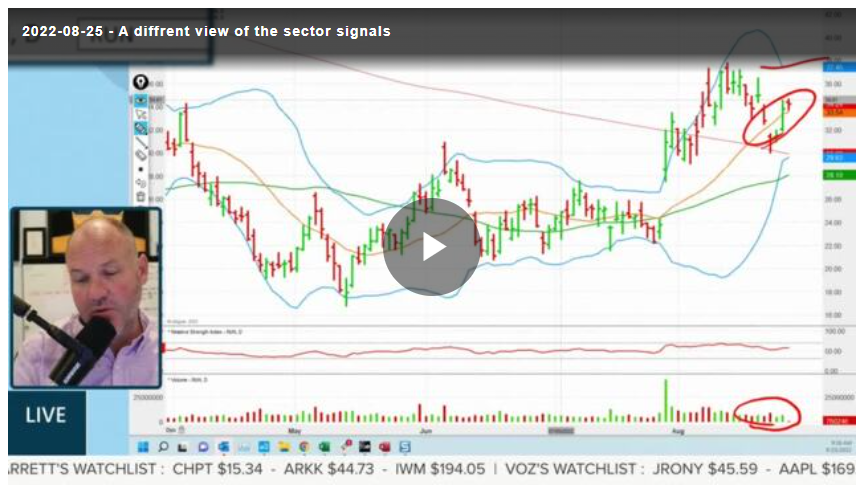 What is the Semiconductor Sector Telling you?

In order to properly understand the movement we are seeing from the Semi sector we should be using relative strength.

Not to be confused with RSI that tells you if a single security is overbought or oversold.

Relative strength compares two securities against each other and shows how the movement differs from one another.

The way I like to use relative strength is to compare it to the rest of the market using the S&P 500. 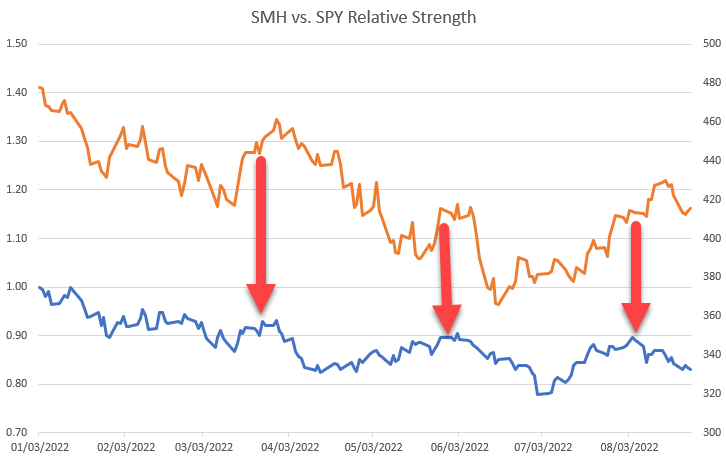 This chart is telling me that the semiconductor market is a leading indicator, its making the same moves as the rest of the market. In this case it is moving before the market does, this means we can use it to predict the shift we are about to see happen across the board.

Now the idea of a single sector leading the market is no a new theory.

Fast forward, a lot of companies are shipping their own goods with internal workers. Seriously when was the last time you had an Amazon box show up in a UPS truck?

Since, this is the case Transportation stocks are no longer the leading indicator so what is?

If for some reason you skipped to this part and have no idea what is going on, Semiconductors are the new leading indicator to prove Dow Theory.

Just think, if the Semiconductors are doing well that means people are buying products. Just look around you, just about everything we buy has a semiconductor in it, and in most cases more than one…

How to Take the Lead and Find the Next leg Down

Something to note, the Semiconductor sector has slipped down to the bottom of the relative strength list and the QQQ has somewhat caught up.

This is due to the recent rally that we’ve seen in the Semis that is beginning to peak.

That indicates that the semis are ready to take another step lower and any weakness in the QQQ will be the catalyst for that move.

I went through a list of the SEMIS that are technically poised for a breakdown during the stream last night and the list is getting longer.

I narrowed the view down to this using the same relative strength indicator we have been talking about but rather than testing against the market, I compared them to their peers.

These 6 made the cut because they were the ones that were trending lower in relative strength when looked at against the rest of the Semi stocks. They are the dirty shirt in the hamper.

BTW, that is something sweet that I read in the NVDA summary…

“Co noted that Gaming and Professional Visualization revenue are expected to decline sequentially, as OEMs and channel partners reduce inventory levels to align with current levels of demand and prepare for NVIDIA’s new product generation. The company expects that decline to be partially offset by sequential growth in Data Center and Automotive.”

DELL announced after the close today and I’d be taking a closer look at the box maker along with that report. There’s another company that gets added to my “bear list”, but I’ve got to save something for my Penny Nation and Night Traders, right?

Just a reminder I am out tomorrow so no shows. So I hope you enjoy your weekend since we won’t get any face time.

As per usual you will still get a newsletter from me, just because I’m not live doesn’t mean I’m not working diligently to keep you in the know.