Let’s have some fun, because why not. It’s Taco Tuesday.

It’s time for a Chart Challenge. If you win, well, that means you’re one of the select few with a peek behind the curtain.

Because what I uncovered has serious implications.

As you can see, this is a weekly chart of the S&P 500. And after Friday’s market, it doesn’t look all that surprising.

Except here’s the thing… This chart is from the summer of 2008, right before the housing market and banks sent us hurdling into crisis.

Well, I’ve got some news for you. This time, the Federal Reserve is the crisis.

While you chew on that a little, let’s look at Chart No. 2…

Like my good friend Garrett Baldwin said this past weekend, “History doesn’t repeat, but it rhymes.”

And man, I’ve got to tell you. I spent a lot of time comparing these two charts. They’re very, very similar.

When I tell you what this means for our present-day market, you’ll see why it’s such a big deal.

Call Doc Brown, because we’re going for a little ride. 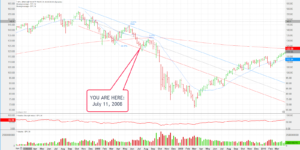 This date came up with an 86% correlation to present day when I ran it through my magical correlation model.

In technical studies, anything north of 80% is what we refer to as “correlated or highly correlated.”

“History doesn’t repeat, but it rhymes.”

This is literally history rhyming at 86% in tune with what we saw in July 2008 – just before it all hit the fan.

We were in the midst of the second week of earnings season.

(Oh, would you look at that. Last week was also the second week of earnings season.)

And at that point in 2008, we were touching down on the bottom of the weekly Bollinger Bands in terms of what the S&P’s got for that regression channel.  That’s a good recipe for reaching “oversold” territory, which often shifts the trend in the other direction.

Well, when I used my method to draw regression channels, it showed that we’re basically at the same exact point in today’s market.

From a technical perspective, this market is doing 86% of same the dance moves.

That’s why this chart is so key to me.

I use this because – say it with me now – history rhymes. From a technical perspective, you could even go as far as to say it does repeat itself.

In many ways, this market is very similar to what we saw in 2008. The only difference – as I said earlier – is The Fed is the crisis, not banking and housing.

But I’m not hitting the panic button. In fact, I love that this market is trying to follow a similar pattern.

That’s right. I love it. Swap out the problem, and we have the same market. And the technicals will show you that it’s acting the same.

Some people are going to ignore this. “You can find a chart that fits any narrative.”

In a way, that’s true. But not here. Let me tell you why.

First of all, my computer programs aren’t working off biases.

Second, we looked at this same chart on September 4. Six weeks ago to this day.

And it mapped out exactly what’s going on with the market.

That chart was telling you to expect a rally. Back in July 2008, that rally was good for 9%. Our last rally ran about 9%.

Let’s be clear. This isn’t going to be all rainbows and sunshine. I’ll be making some pivots along the way.

There might be times where we’ll buy some calls in the midst of a bear rally. Heck, there could even be a period of time when we switch to full-on bull mode. You better believe I’ll be ready to capture the profits before the stocks inevitably sink again.

After all, pivoting is one of my specialties. Just ask my rec-league basketball coach.

And besides, with our recent track record, we’re allowed to pivot.

If you’re not sure exactly what you’re looking at, well, that’s a taste of the last 48 trades I gave my Night Trader and Penny Nation members. They’re all in the green.

That’s no accident. And I can guarantee I’ll pivot a lot faster than The Fed.

Oh, and in case you think I’m out on a limb with this comparison, I’m not the only one who’s noticed the rhyme between 2008 and today.

My colleague Shah Gilani, who traded for a ton of money through Black Monday in 1987, the Dotcom Crash in 2000, 2008, and the COVID Crash of 2020, insists today’s crisis is just getting started.In fact, he thinks it could be the worst yet – for people who are unprepared.

Shah will be hitting the Money Morning LIVE room tonight (October 18, 2022) at 8 p.m. to run his viewers through his recommendations – and to hook attendees up with a free, no-strings-attached year of the Money Map Report.

I know I’ll be tuned in. See you there.

[Editor’s Note] On October 25th, a unique trade window opens. Tom Gentile has the ticker symbol recorded in his calendar and knows precisely when to get in – and out. But not only does he want to share that with you, it’s part of a much bigger puzzle. In fact, he’s forecasting a once-in-a-decade cluster of these “Vega Burst” opportunities. And he’s going to show you how to play it all. Reserve your spot now.